Turkey’s Incursion into Syria Will Escalate Conflict with the Kurds 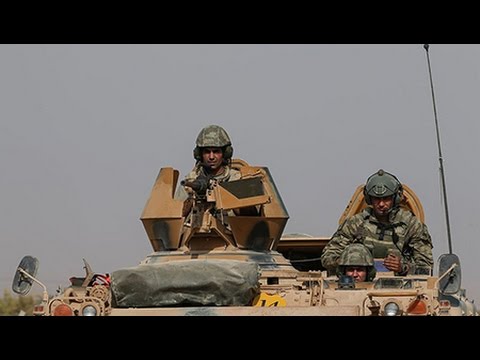 JAISAL NOOR, TRNN: On Wednesday, Turkish tanks crossed into northern Syria alongside Turkish-backed Syrian rebels in a bid to push the Islamic State out of the border town of Jarabulus. A Reuters reporter at the scene witnessed intense bombardments, with [palls] of black smoke rising around the town. Turkish president Tayyip Erdogan said the operation was targeting the Islamic State and the Kurdish PYD, Democratic Union Party, whose gains in northern Syria have alarmed Turkey. Ankara views PYD as an extension of Kurdish militants fighting an insurgency on its own soil, putting it at odds with Washington, which sees the group as an ally in the fight against the Islamic State.

Now joining us to discuss all of this is Baris Karaagac. He’s a lecturer in international development studies at Trent University in Ontario. Also the editor of the book Accumulations, Crises, and Struggles: Capital and Labor in Contemporary Capitalism. Thanks so much for joining us again.

BARIS KARAAGAC: Thanks for having me.

NOOR: U.S. vice president Joe Biden arrived in Turkey today, which has NATO’s second-biggest armed forces, just hours after the operation began. Biden said Washington has made it clear to the Syrian Kurdish forces, who the U.S. backs, they must return east of the Euphrates river after they seize control of the Syrian town of Manbij if they wish to continue and retain U.S. support. Here’s a little bit of what he said.

JOE BIDEN: No separate entity on the Turkish border. A united Syria. And the prime minister explained precisely the arrangement that we have relative to both Jarabulus and the commitment we made with regard to Manbij. We have made it absolutely clear to the elements that were part of the Syrian democratic forces, the YPG that participated, that they must move back across the river. They cannot, will not, and under no circumstances get American support if they do not keep that commitment, period.

NOOR: We wanted to get your response to that. Also, the timing of the offensive. It comes just four days after a suicide bomber suspected of links to the Islamic State killed 54 people, many children, at a wedding in the southern eastern city of Gaziantep. We’ve shown footage now of the funerals. The victims were just laid to rest on Sunday. Give us your response.

KARAAGAC: This is good and bad news for the Syrian-led forces in northern Syria. Since the beginning of the civil war in Syria, Kurds and their allies have been trying to create a corridor and establish a state, or a state-led [like] structure in the northern part of Syria alongside the Turkish border. And in this process, the main supporter of the Kurdish forces has been the American state.

What Joe Biden clearly stated today is that if the Kurdish forces try to cross to the Western side of the Euphrates river, which Turkey has been referring to as its red line, meaning an off-limits zone for Kurds, the U.S. will cease to support them. So this is clearly negative, really bad, sad news for Kurds in the region.

So it was only a matter of time before Kurdish-led forces would take or capture this town. In order to prevent this from happening, Turkey intervened and led a group of people, or jihadist groups in the region, to capture the town of Jarabulus itself. So it is a clear message to the Kurds that Turkey would do anything to prevent a Kurdish polity, a state, in northern Syria from becoming a reality.

And what complicates the issue is now what Joe Biden said today. If Kurds try to do anything west of the Euphrates, they can’t count on the U.S. support. So they will be on their own. And on their own, Kurds do not stand a chance against Turkish forces, or the Syrian forces, or the other jihadist forces. So this is really sad news for the Kurds.

NOOR: And so the Syrian foreign ministry condemned this action, said it was a breach of their sovereignty, accused Ankara of launching the incursion to replace the Islamic State with other terrorist groups. Talk about what the impact is going to be in Syria. We’ve seen a country that is so devastated already. Could things get worse?

KARAAGAC: Well, things could get worse both in Syria and in Turkey. Now, by occupying this town Turkey has targeted two different forces. One of them is ISIS, and the other one is the Kurds. ISIS has committed or organized a number of terrorist attacks on Turkish soil in the last year, which led to the death of hundreds of people. And many ISIS militants are embedded already on Turkish soil. And throughout this process Turkey has done almost nothing to prevent them from settling in Turkey, spreading their propaganda, and recruiting new members. In Turkey, actually, ISIS has some publications, is organizing mass [inaud.], it’s organized public mass prayers, and everyone knows that in particularly large cities such as [inaud.], Ankara, Izmir, it’s been–not so much in Izmir but in other cities—it’s been recruiting new members.

So until now, Turkey has not been an active fighter against, or an active actor, in the fight against ISIS. So it’s a little bit hypocritical in that regard.

Secondly, we’ll have to see how other forces, other actors that in the Syrian conflict, have been involved in the Syrian conflict, will respond to this move by the Turkish state. Russia today said it was quite concerned about the occupation of Jarabulus by Turkish-led forces, but we can assume that the Turkish state got the backing, unofficial backing, of the Russian state before moving to Syrian territory. Americans seem to be backing Turks in this move. And one of the reasons why Biden went to Turkey recently is the tension between the U.S. state and Turkey. So I think Americans have thought it is a prudent step to back such a step, move by the Turkish state.

So we’ll wait and see how the other actors involved in the conflict will respond to this. But I think Turkey’s allowed to stay on Syrian territory. The biggest losers will be the Kurds, who will be pretty stuck, prevented from consolidating their power in northern Syria.

And I need to add something important. The media, especially western media, and the Middle Eastern media, talk about these modern forces involved in the Syrian conflict that have been fighting against the Assad regime. Well, these modern forces are on their own, they’re quite week. But what these sources refer to, in fact, as modern forces, are rival jihadist groups that have been fighting each other or ISIS in the last three or four years. The only secular [pro-western] forces in the region, in the country, today are the Kurdish-led forces.

If you look at the problem of, for example, [TYD], it is quite remarkable what they’ve been talking about and what they would like to achieve in that part of the country. And if they are prevented from doing this it would be a huge step back, and it would be a [inaud.] for all the progressive forces in the Middle East.

Another important point is that this will have important repercussions within Turkey as well. It seems that President Tayyip Erdogan and Prime Minister Binali Yildirim have gained consent and support of all the opposition parties in parliament before they decided to occupy Syrian territory, except for the pro-Kurdish party, HDP. So this indicates that Tayyip Erdogan and Binali Yildirim will increase pressure on the Kurdish opposition in Turkey, which will lead to a more tense and likely violent period within Turkey itself.

So Turkey is not immune to this process. Moreover, Turkey has attacked ISIS today directly, with tanks and fighter jets, et cetera. And ISIS will respond, will retaliate on Turkish soil. That means we are likely to see more terrorist attacks which will lead to more death in Turkey. But this is a direct outcome, this is a direct outcome, of Turkish foreign policy in the past five years, because Turkey wanted Assad gone. And in this process, it has supported any group that was fighting Assad except for the Kurds.

So Turkey has been, or the Turkish state, has been complicit in those terrorist attacks that have been taking place both in Turkey and elsewhere in its neighbors.

NOOR: All right. Well, we want to thank you so much for that analysis, and we’re going to keep following developments in this story, and we’ll certainly have you on again. Thanks so much for joining us.

KARAAGAC: Thanks for having me.