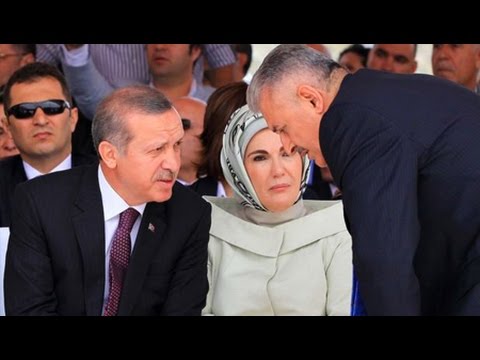 Turkey’s parliament on Friday approved stripping it’s members of immunity from prosecution, a move likely to see the pro-kurdish opposition sidelined, easing President Tayyip Erdoğan’s path to strengthening his presidential powers. Erdoğan has accused the pro-kurdish HDP, the parliaments 3rd largest party, of being the political wing of militants. The militants have waged a 3-decade insurgency in the country’s largely Kurdish southeast. Erdoğan wants to see them prosecuted. That is the parliamentary end prosecuted, not to mention the terrorists. The HDP denies such links and says it’s parliamentary presence could be all but wiped out if prosecutions go ahead. The HDP has said an overwhelming majority of it’s 59 deputies could be jailed, mostly for views they have expressed. In the 3rd and final vote of a secret ballot, 376 MPs in the 550 seat parliament, backed the plan to lift MP’s immunity. A high enough level of support to change the constitution directly without needing to hold a referendum. On to discuss these and other developments, we are joined by Baris Karaagac. He’s a lecturer in international development studies at Trent University in Ontario. He’s also the editor of the book, “Accumulations, Crisis, and Struggles, Capital and Labor in Contemporary Capitalism.” Baris, so good to have you with us.

KARAAGAC: Many critical analysts and journalists as well as members of opposition parties have referred to what happened today as a coup d’etat by the AKP, but particularly by President Erdoğan. Under current legislation Turkish lawmakers, Turkish MPs, are immune from all kinds of prosecution while they’re in office. However prosecutors can file police proceedings against them, against the deputies, which could lead to court cases, once these deputies leave parliament. What happened today is that with the vote, somehow from the 2 opposition parties, the AKP was able to amend the constitution, and from now on, actually this is quite temporary and one time only- now members of the parliament will be, some of them will be taken to court. This has become possible with the amendment today. Why this is so significant, this whole thing has been intended to target, or it has targeted the pro-kurdish HDP members in parliament. As of yesterday, there was 667 police proceedings against the deputies. And 1 in 5 of them were against members of the pro-kurdish HDP which constitutes less than 10% of the entire parliament. And a couple of hours before the interview I read a tweet by a member of the parliament and he said, “Half an hour before the vote took place, additional 131 police proceedings arrived in parliament.” So it is clear what the intent is.

The other thing is we found out that this was a secret ballot. However, the entire AKP, all members of the ruling AKP violated this principle, because even among these people, there were people that were members, who are not comfortable with this amendment, and it was likely that they were going to vote against it. But the AKP leadership, with instructions from Erdoğan, made clear that they want to make sure that these people would vote yes.

PERIES: Now the ruling party, this is Erdoğan’s party, VP resigned. He’s also the head of the party. And he’s been replaced with a new person. Tell us about all that happened, the significance of it, and who this new person and his allegiances are to Erdoğan.

KARAAGAC: A couple of weeks ago a very interesting development took place. After meeting with President Erdoğan, then leader of AKP and Prime Minister of Turkey, Ahmet Davutoğlu, resigned from his position. And this week, a new tentative emerged. This is the transport patient medicine was in there, has occupied this position for over a decade, and there would be an extraordinary party convention to- that would take place on Sunday which would determine, which will choose the new leader of the party as well as the new Prime Minister. And [inaud], the current transportation minister, it looks like he will be the new PM, and there, of course, he has been a very close friends with Erdoğan, for a long time. He’s one of the founders of the AKP. And he’s the longest serving Transportation Minister in the history of the Republic of Turkey. But what is even more important than these teachers, he’s completely loyal to Tayyip Erdoğan.

So, why did such a thing happened? Why did Prime minister who took 50% of the vote only last November, resign? This is a critical question. And when we look at the last 10 months, we see that there were a number of disagreements between Amid[inaud] and Tayyip Erdoğan, the President. And these disagreements mostly concern the crackdown, the repression on the media, as well as Erdoğan’s intention, goal of consolidating his power through making an introduction of an executive presidential system, replacing the current paramilitary system in Turkey.

PERIES: Now the HDP, while they occupy roughly 10% of the parliament, it’s a critical and important element to uphold democracy and represent the viewpoints of the Kurdish in the country. And these alliances are very important. And Erdoğan is looking to wipe it out. Why?

KARAAGAC: Well, because the Kurdish movement, first of all, it is the most powerful opposition force in the country recently. And secondly, before the two elections that took place last year, they made it very clear that they would do anything to prevent Erdoğan from increasing his power through constitutional change. And they have blocked the constitutional amendment, that would have Erdoğan realize his goal. This is the main reason.

PERIES: Baris, there has been some recent developments, very worrying developments, as far as Turkey is concerned, by way of Erdoğan’s assertion against various media outlets, not only in Turkey but reaching out to Germany as well. Give us a sense of why this is taking place.

KARAAGAC: The regime in Turkey has become increasingly authoritarian, particularly since Erdoğan became president in 2014. But this has become much worse in the last year, since the beginning of the, since the crease fire with the Kurdish PKK needed in July. And when we look at some numbers, Turkey’s record with regard to freedom of press is terrible. Out of 180 countries on the list, Turkey ranks 151 in terms of freedom of press. And Erdoğan’s repression was not limited to the press. I’m sure many of the people in our audience have heard about what happened to a number of academics, actually more than 1000 academics who signed a petition calling on the Turkish government to end it’s really bloody war against Kurds in the southeast of the country. Many of these academics have lost their jobs. And some of them are my close friends. I signed the petition. Others, they have received death threats. There were notes posted on their offices at university campuses. And some of them were jailed. One for example, a professor from the prestigious [inaud] university was even kept in solitary confinement. And all of these people have been accused of receiving instructions from the, on the wing of the Kurdish resistance the PKK, or inciting violence, or being members of a terrorist group. Of course these are ridiculous accusations.

PERIES: Now I feel like we’ve only opened one window of the larger deteriorating political conditions in Turkey right now, so we hope to have you back very soon, Baris. Thank you so much for joining us.

KARAAGAC: It was a pleasure for me Sharmini. Thank you.