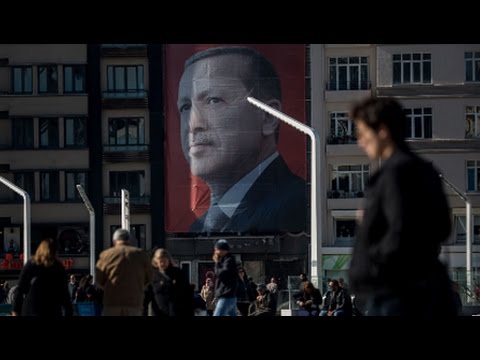 Secretary of State, Rex Tillerson visits Ankara this week. It is an opportunity here for us to talk about new developments in Turkey. The referendum to consolidate presidential powers is being executed in the next couple of weeks, as well as there’s been rising tensions with several European countries.

On to talk about all of this with me, is Baris Karaagac. Baris is professor of international development studies at Trent University, in Ontario. He’s also the Editor of the book, “Accumulations: Crisis and Struggles, Capital and Labor in Temporary Capitalism.”

Thank you so much for joining us, Baris.

BARIS KARAAGAC: Thanks for having me, Sharmini.

SHARMINI PERIES: So, Baris in the past we’ve discussed the consolidation of powers that Erdogan has been seeking for a very long time now. And now the referendum has been set, and he’s about to execute it. Not only in Turkey, but throughout the world. Tell us more about it.

BARIS KARAAGAC: This is the most significant development in Turkey. There will be a referendum held on April 16th on 18 proposed amendments to the constitution. The significance of these amendments is that they are going to replace the existing parliamentary system with an executive presidential system.

Many critics and the opposition have argued that this will further centralize power that Erdogan has been using for some time, enjoying for some time, and it will be actually the end of the regime that we’ve seen in the past 80, 85 years in Turkey. And there is significant concern both in the world, but particularly in the European Union and also in Turkey, and I agree with the concerns and worries of these people — especially, given how these amendments will increase even further the power Erdogan has been using in the past three to four years.

SHARMINI PERIES: Give us some examples of the kind of power that he’s exercising, which will now be consolidated if he actually wins this referendum.

BARIS KARAAGAC: There won’t be a prime minister. That position is abolished, if there’s a yes vote on the referendum. If the President wishes, there won’t be even a cabinet, and he will decide how many vice-presidents he needs, how many ministers or secretaries he will need, and these will be all his calls. And he will be able to appoint a significant number of the Board of Judges and Prosecutors whoever, a board, an institution that has disciplinary power over the judiciary system.

As a result of these amendments, he would be able to increase his power significantly, and there will be little supervision over how he wields this new power. So, many people who have been observing what is happening, unfolding in Turkey, are arguing that what we have seen so far is an authoritarian regime and centered on an authoritarian personality. But if there is a yes vote on the referendum, this could take us to a totalitarian regime, which is really, really concerning.

SHARMINI PERIES: And President Erdogan has been getting into a lot of conflict in some of the European countries, where there are Turkish citizens living, largely many of them who have gone there as refugees, and he’s campaigning in these countries. What’s been the problem with these kinds of campaigns, because it’s flared up quite a few conflicts, and spats back and forth between Ankara and several European cities — tell us more about that?

BARIS KARAAGAC: Well, first of all, it is important to remind our audience of the fact that there are hundreds of thousands of Turks or Turkish nationals living in Europe. It’s actually a few million. And many of them are in Germany. They’ve been living there for decades. They’re part of European society, but they also have Turkish nationality. And many of these people are going to vote during this referendum.

The issue, the problem for Erdogan is that he’s dealing with is a very divided and polarized society. He recently he’s been able to gather the support of the nationalist party, but even nationalists are dividing among themselves as to whether or not they should vote yes or no. So, Erdogan used these discursive clashes with European states and their high-ranking politicians, to gain more nationalist support to appeal to the nationalists in Turkey and in Europe, at the same time consolidating his power base.

We heard him referring to some of the states in Europe as fascists, some politicians as fascist; they referred to these states as remnants of fascism and Nazism. These are very sensitive issues for a number of reasons– historical, political, social reasons — in these European countries. And of course, these attacks were not taken well, greeted well by the European states. There was a reaction, a strong reaction coming from, for example the President of Germany, from the Prime Minister of Germany, again, Dutch politicians, etc., etc.

So… but I think it has been a very effective tactic used by Erdogan to appeal to the nationalist votes, to nationalist parts of Turkish society — both in Turkey and within the European Union. But at the same time, this has led to significant damage with regard to the relationship Turkey has enjoyed with the European Union for a long time.

SHARMINI PERIES: Baris, at one point, Erdogan actually called out the Dutch, and the German governments, and calling them Nazis. What agitated him to make those comments?

BARIS KARAAGAC: Well, a number of high ranking Turkish politicians, including ministers, wanted to hold rallies on European soil and asked for a yes vote from the Turkish electorate living in those countries. And the German state, and the Dutch state did not allow this to happen. And I think they administered this and made it problematic in a wrong way by playing into the hands of Erdogan who was provoking a reaction from these governments, which strengthened his position on the referendum among the nationalist parts of the populations.

But the cause was the desire of Turkish politicians, including Erdogan to hold rallies in European countries to ask for a yes vote on the referendum.

SHARMINI PERIES: Right, and Baris there’s also been several incidents with Greece and Turkey, one about encroachment of air space. Of course, that famous incident that we had already talked about, which was about the trials that are going on in Turkey related to the coup.

SHARMINI PERIES: And of course, some of the people involved in the coup fleeing to Greece, and claiming political exile there. And recently, there have been a few other developments. Tell us about relations with Greece and why they’re being heightened at this moment.

BARIS KARAAGAC: Well, recently as you mentioned, there’s the issue of Greek Supreme Court refusing to extradite the eight military officers who sought refuge after the coup d’état attempt, back in July 2016. Now, there are some clashes over, well, again discursive clashes over territory in the Aegean Sea, and some of them relate to a number of small islands. But some of them are really, really small, small islands. You could even call them pieces of rock. And Turkey and Greece had a major clash over one of these islands back in 1996. And this brought the two countries on the brink of war.

So, these are actually non-issues. These have been settled a long time ago, although Turkey still claims that, you know, some of these settlements were unfair, but for a long time there were no such clashes. The reason again, why these are happening right now, is that Erdogan wants to create external enemies, so that he can increase and consolidate his power base within Turkey and outside of Turkey.

SHARMINI PERIES: And Rex Tillerson’s visit to Turkey this week, what’s on the agenda?

BARIS KARAAGAC: Well, I think they will be talking about Syria, and the Turkish presence in Syria. But one of the critical issues there is the role that will be played by Kurds, both in Syria and Iraq, in the near future. So, Turkey, again considers the PYD and its armed forces who have been controlling part of a northern Syria for some time as terrorists.

At the same time, both the Americans, and now the Russians, are open to their cooperation and their efforts against ISIS, or you know, in both countries. But Turkey is adamantly opposed to the participation of Kurdish forces, but particularly PYD in these processes. So, I think this will be the most important issue on the table.

SHARMINI PERIES: All right. Baris, I thank you so much and we’ll be keeping an eye on this, and if there are any other developments as a result of Rex Tillerson’s visit to Turkey, we’ll be back to you. I hope you can join us then. Thank you so much.

BARIS KARAAGAC: It was my pleasure.

SHARMINI PERIES: And thank you for joining me here on The Real News Network.