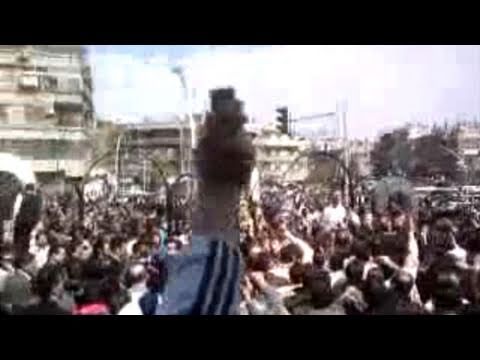 PAUL JAY: Welcome back to The Real News Network. I’m Paul Jay in Washington. In Syria, one of the critical issues or demands of the protesters has been the ability to create their own political parties, an end to the national or the emergency laws. Now joining us to talk about the significance of these issues is Bassam Haddad. He’s director of the Middle East Study Program at George Mason University, he’s a visiting professor in the Department of Public and International Affairs, he’s the author of Business Networks in Syria, and he’s cofounder of JadMagazine.com. Thanks for joining us again.

BASSAM HADDAD, MIDDLE EASTERN STUDIES PROGRAM, GEORGE MASON UNIVERSITY : Thanks for having me.

JAY: So talk a bit about the democratic demands of the opposition movement.

HADDAD: Well, I’m just going to focus primarily on a couple of things. I mean, first of all, arbitrary rule in Syria is rampant and it’s–actually touches all areas of life. If that is not removed, of course, any other changes will be reversed by the fact that you have arbitrary rule that is not accountable. So that’s one umbrella comment. Now, what is a good indicator of the Syrian regime’s desire to change things is not just the lifting of the emergency law, because lifting the emergency law can be substituted by existing laws that prevent people from doing a whole bunch of things in Syria in terms of political organization. What is significant is the elimination of Article 8, which considers the Baath Party the ruling party in Syria and the only party, national party, that can exist, maybe with an umbrella of parties that exist now as rubberstamp parties. What needs to be done, at least one thing that needs to be done–this is if protesters are still open for the question of reform, as opposed to regime change–is for the state to allow for the political organization of independent parties, whereby people can actually, for the first time in perhaps 48 years, mobilize to organize independent political parties that reflect the political spectrum in Syria. If this happens, we will probably be seeing a different approach from the Syrian regime that will perhaps avert this crisis in the short run. I do not think in the long run the Syrian regime will be able to maintain the structures of power that exist, but in the short run it will be able to avert this crisis if it engages in fundamental reforms.

JAY: And is there any suggestion the regime is even considering this multiparty system?

HADDAD: No. Judging from the recent speech and from the kind of emboldenment that the regime has entered into as a result of the decline of number of protesters and the escalation or the increase in the number of people who are increasingly concerned about civil strife, I think the regime will probably go back to square one with cosmetic changes.

JAY: Thanks very much for joining us, Bassam.