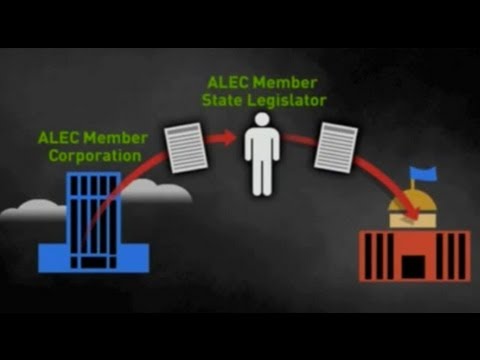 The very powerful and secretive corporate-funded American Legislative Exchange Council, or ALEC for short, is celebrating its 40th anniversary this week in Chicago, with planned protests at their annual meeting.

Joining us from Madison, Wisconsin, is Brendan Fisher. Brendan is the general counsel with the Center for Media and Democracy, who are the publishers of ALECExposed.org and PRWatch.org. He has worked extensively on the ALEC Exposed project, documenting a broad array of ALEC agenda items, ranging from voter suppression to education privatization to, more recently, ALEC bills to advance a big-oil, big-ag agenda.

Thanks for joining us, Brendan.

BRENDAN FISHER, GENERAL COUNSEL, CENTER FOR MEDIA AND DEMOCRACY: Hi. Thanks for having me.

DESVARIEUX: So lobbying in Washington and even on a state level is pretty much the norm. What makes ALEC so different? Can you give us a bit of a history of who ALEC really is?

FISHER: Sure. Well, the history first. They were founded in the early ’70s during the same era that a whole array of right-wing institutions were being established and set up. One of its key founders was Paul Weyrich, who founded the Heritage Foundation that same year, went on to found the Moral Majority. And they’ve been enormously successful over the past 40 years in advancing special-interest legislation through the states and serving as a conduit for the corporate agenda. And their issue areas range from privatization of schools to privatization of prisons, to laws that make it harder to vote, to laws that promote a race to the bottom in wages, wages and working standards, and also push a anti-environmental agenda.

But with respect to how is this different from traditional lobbying, with traditional lobbying you at least have some level of transparency. If a lobbyist is going to meet with a legislator in a state, they’ll maybe get there ear for 15 minutes. With ALEC, legislators fly to ALEC meetings, usually on the corporate dime. Meetings are held in places like Amelia Island, Florida, or New Orleans, or this year in Chicago, usually at the nicest hotel in town. The corporate members that benefit from ALEC model legislation are footing the bill for legislators’ travel expenses.

While at these meetings, lobbyists get legislators’ ear for three days of meetings and workshops and other events where legislators are sold on these corporate-friendly ideas and urged to pass these bills that are going to benefit the corporations that are footing the bill for the travel, for the meetings, for the nights out. By the time legislators get back to the state, they are the ones who are already convinced that a particular bill or policy idea is right for the state. By the time the public gets a chance to weigh in, the legislator is oftentimes already convinced. So in some ways the legislators are the ones who are becoming the lobbyists for the corporate special-interest agenda advanced by ALEC.

DESVARIEUX: You write extensively about ALEC, and I know you’ve done extensive research on this. Can you give us a sense of who’s a member of ALEC? I know the membership lists aren’t public, but what have you guys uncovered?

FISHER: Sure. Well, that’s by design. ALEC would much rather operate in secret with the public not knowing who is a member.

So ALEC’s a membership organization. It brings corporations together with state legislators for corporations to push model legislation on these state politicians. So the corporate members include Koch industries, BP, Amplify, which is the education division of News Corp (News Corp. is Rupert Murdoch’s group, the parent company of Fox News), as well as a whole other host of education for-profit education groups that profit from the privatization of education.

On the private sector–on the public sector side, it’s for the most part Republican state legislators and legislators from states across the country. All 50 states count ALEC members in their legislature. So it really runs the gamut for the corporate members.

But the corporate membership list has dropped in recent years as more public scrutiny has fallen on ALEC. At least 49 major corporations have dropped their membership. Everything from Coca-Cola to Amazon.com to GE and Walmart have all decided that they don’t want their brand publicly associated with ALEC.

But groups like Koch, Koch Industries, groups like PhRMA and the tobacco industry have continued to fund ALEC, and very well may continue to do so as long as they can use the organization to successfully access legislators and push their policies.

DESVARIEUX: Let’s talk about some of these policies that they like to push. You’ve written about environmental legislation. There have been at least 77 bills in 34 states. What is the nature of those bills? And whose interests do they represent?

FISHER: Sure. Well, they certainly represent the interests of ALEC’s polluter members–BP, Shell, Chevron, as well as TransCanada, which is the company that’s building the Keystone XL pipeline. So the bills would prefer fewer environmental regulations and more drilling and more fracking.

One of the big bills they’ve been pushing this year is called the Electricity Freedom Act, which would repeal state renewable portfolio standards. And these are standards that a majority of states in the U.S. have on the books that would require utilities provide a certain percentage of electricity from renewable sources. And they’ve been enormously successful at creating more demand for renewables, creating green jobs, and in the end reducing carbon emissions. But this threatens the profits of ALEC’s corporate members. So far, in 2013, ALEC has been unsuccessful at getting these bills passed in states across the country. But we know that they’re not giving up. We know that at this next meeting in Chicago they’re going to consider another bill to try and thwart these entirely successful renewable energy standards.

DESVARIEUX: Okay. The renewable energy standards, what does this do to green jobs, for example? What is the effect on the green jobs economy?

FISHER: Well, I think the purpose of these standards are to create that baseline demand that will spur innovation, spur investment in renewable technology, and begin to create those jobs that–create the baseline in demand to start investment, to start creating jobs needed to really get the green economy going. In Germany, for example, they’ve set a goal of having 35 percent of energy provided from renewable sources by 2020, and it’s really created this boom in green jobs, in manufacturing jobs, in construction jobs. And we can easily do the same thing here in the U.S., and we’ve begun to do so with these renewable standards. And even conservative legislators in many states have recognized that these really are a job-creating type of legislation. But like I said, these bills threaten the profits of ALEC’s corporate members.

DESVARIEUX: And one of the corporate members that you mentioned is the Koch brothers. And could you just give us a sense of what the connection is between ALEC, the Keystone pipeline, and Koch industries?

FISHER: Sure. Well, I think it’s two things. So, one, Koch industries have long been involved with ALEC. They were both–Koch Industries and the Koch brothers themselves have been funders of ALEC since the early years. In the 1990s, when ALEC was struggling for money, Charles Koch gave a $100,000 donation, basically a loan to ALEC to help it through some tough times. And we know that the Koch family foundations, which are officially separate from Koch Industries, have also funded ALEC. And Americans for Prosperity, which is the Tea Party front group founded by David Koch, has also funded ALEC, has joined ALEC as a member, has attended ALEC meetings. And also, within the states, they’ve provided support for ALEC policies when they have been introduced.

So as far as the Keystone XL pipeline, TransCanada is a member, and we know that at least nine ALEC legislators were flown to Canada in October of last year on a trip that was sponsored in part by TransCanada, as well as the American fuel and petroleum manufacturers foundation or association. And they were taken on a tour of the Alberta tar sands, which was clearly to convince them that the tar sands extraction and Keystone XL pipeline is going to be great for America. And it was successful. At least ten states have introduced resolutions in support of the Keystone XL pipeline. In Nebraska, we know that a legislator who’s been cheerleader for the Keystone XL pipeline and went on this trip didn’t disclose it. He never told his constituents he received these thousands of dollars in gifts from the government of Alberta, and possibly from corporate interests. And we filed an ethics complaint in that state for his failure to disclose.

DESVARIEUX: And obviously ALEC is known for operating in secret, but they are a charitable organization. They’re a 501(c)(3). Have there been any attempts to challenge that status?

FISHER: Yeah, so ALEC is a 501(c)(3) charity, which means that the tens or hundreds of thousands of dollars that corporations pay to join ALEC and access legislators and push their agenda, they can count this as a charitable tax write-off, which means that we as taxpayers are essentially subsidizing this special-interest lobbying. And there have been at least three credible complaints against Alex (c)(3) charitable status, one by Common Cause, alleging that ALEC primarily operates to advance private interests rather than public interests, and also that they’re participating in impermissible amounts of lobbying. As a charity, ALEC is supposed to be involved in minimal lobbying. But by existing to advance legislation through the states, it would appear that they’re involved in much more lobbying than should be permissible for charity.

You know, something else that’s really interesting about ALEC, and I think I mentioned this earlier, is that legislators attend these meetings on the corporate dime. Corporations pay for legislators to fly to the ALEC meetings and stay in fancy hotels, which in many cases amounts to thousands of dollars per legislator. And because these funds are filtered through ALEC, they also get to claim these gifts as a charitable tax write-off. And just this week, my organization, Center for Media and Democracy, along with Common Cause, re-released a new report about this scholarship scheme and also jointly filed a letter with the IRS alleging that ALEC has massively underreported the amount of scholarships that it has given to legislators over recent years.

DESVARIEUX: Okay. Well, Brendan, thank you so much for your work, and thank you for being with us.

FISHER: Alright. Thanks for having me.

December 23, 2019
Sign Up for Our Newsletter
Help Us Make Real News!