Republicans are engaged in a fierce debate about the future of their party while the Democratic Party appears uninterested in re-examining its identity, argues Bill Curry

Republicans are engaged in a fierce debate about the future of their party while the Democratic Party appears uninterested in re-examining its identity, argues Bill Curry 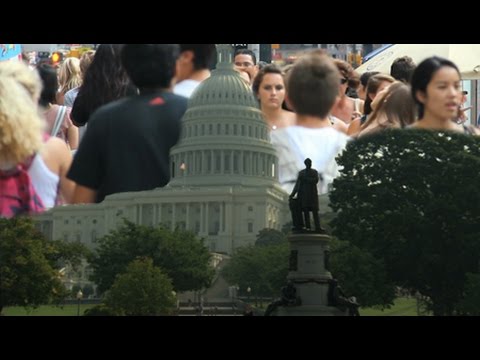 JAISAL NOOR: Republican lawmakers in the House are falling over each other to repeal, and replace, the Affordable Care Act — or Obamacare — with their goal of getting a bill to the senate by the end of the month.

SENATOR: What our problem is, and what we’re trying to do, we’re going to repeal and replace Obamacare, and we’re going to do it with a three-pronged approach. Number one is what we’re talking about right now. This is what the Ways and Means Committee have marked up this morning, what the Commerce Committee is in the middle of right now. That’s called reconciliation. That’s the American Healthcare Act.

There are only so many things you can do in that bill, because of the Senate Floor Rules of Reconciliation. You can’t put everything you want in that legislation, because if you did, it would be filibustered, and you couldn’t even bring it up for a vote in the Senate.

JAISAL NOOR: The proposal is backed by President Trump, who pushed for it on Friday.

DONALD TRUMP: And this is the time we’re going to get it done. We’re working together. We have some great results. We have tremendous spirit, and I think it’s something that’s just going to happen very shortly.

JAISAL NOOR: Critics note the proposal could leave millions without coverage, and give a massive tax break to the wealthy. But it’s also exposed rifts within the Right, with some calling the proposal, “Obamacare Light,” and demanding a full repeal.

SENATOR: Because I’m not the only voice saying this. And so, what they should do is, clean it up. Get rid of the Obamacare Light stuff. Get rid of the taxes, the subsidies, the mandates, the bailouts, and just do repeal.

JAISAL NOOR: We are joined to discuss this, by Bill Curry. He’s a columnist for Salon.com, The Daily Beast. A former White House Counsellor to President Clinton.

So, what interests do you see behind these divisions among the Republicans? Or are their divisions purely ideological? You see the hardline free-marketers versus the more moderate Republicans.

BILL CURRY: We would have thought before the election that whichever party won, would have a period of great unity. And that whatever party lost would be cast into a years-long debate over its fundamental identity. And, instead, the opposite seems to be happening.

The party that won is being cast into a bitter civil war over its fundamental values and meaning. And the civil war is between its President and itself in many ways. And the party that lost, the Democrats, can’t seem to still get up a real discussion about what they stand for, or where they’re going.

It’s been a few months now and the Democrats haven’t asked themselves — how would they fix Obamacare? Here’s something the Republicans say that’s right, “It’s broken. Has been from the beginning.” Are they going to really commit to a public option? Are they going to finally embrace single payer? Are they going to put a plan of their own on the table?

JAISAL NOOR: The website The Hill is reporting most of the conservative attacks in the Republican Healthcare Bill are targeted at House Majority Leader, Paul Ryan, not at President Trump. Why do you think that is, after all, Trump says he supports the Bill 100%?

BILL CURRY: In the real extreme among the House Caucus, and we don’t know what the numbers are at this point, you know, for sure — how that Caucus is really going to break down between Ryan and his various critics. I don’t think there’ll be the numbers to pass a Bill. But how the Caucus breaks down, I’m just not sure.

But again, among the hyper-right they have a sneaking suspicion that somehow somebody is going to get some actual healthcare out of the Bill. And that’s just not an acceptable outcome. And so, you know, even the health savings and count subsidies, even the promises to delay the implementation, even the slightest thing that suggests that only nine million, instead of 12 million, people will lose their coverage, has them upset. I don’t think, I don’t know how big that group is but it won’t go along with anything except an absolute Libertarian fantasy, utter privatization, and deregulation, of the market.

JAISAL NOOR: And so, the Republicans have been so focused on demanding Obamacare get repealed and replaced for years now. And now all of a sudden it seems like they are scrambling and disorganized to put something together.

BILL CURRY: Well, you know, part of it is just the descent of all politics into mere message politics. They’ve been calling for repeal and replace for six years without ever asking themselves, you know, for sure what they really wanted to replace it with. It’s a long time to go without asking yourself any searching questions about what it is you’re actually proposing.

And so, now they’re just coming face-to-face with the fact that they themselves have just treated this as a political football. And they’re also coming face-to-face with the fact that their own ideology is so completely bankrupt. There’s nothing they have to say about any of these issues. There’s nothing they have to propose that would actually be able to put a solution on the table. And so, again the iron here is that they won. They won without any answers. They won without any consensus. And they won also, and this is important, with a man who is mentally unbalanced and extreme in a way no high elected American politician has been in my lifetime and maybe in our history.

And so, they get up every morning wondering if this is the day he’s going to be carted out, you know. And you know, this is the day he’s going to finally cross the line, in terms of his own behavior, mental health. I mean, they seriously, they don’t talk about it but they understand it as well as we do. And so, they’re just kind of frozen. I just don’t see how they come together on a major issue in the Congress. So, in the Congress they’ll be gridlocked within the Republican Party over their own agenda, in part because it doesn’t work, and in part because the President opposes it. And then the President will be just tweeting — and giving out Executive Orders — and creating international embarrassments on his own.