Will a Grand Bargain or Betrayal be Obama’s Legacy

Bill Black: Slate magazine says that President Obama wants a Grand Bargain on budget cuts he can call his legacy - but it will be a Grand Betrayal that makes the recession worse

Bill Black: Slate magazine says that President Obama wants a Grand Bargain on budget cuts he can call his legacy - but it will be a Grand Betrayal that makes the recession worse 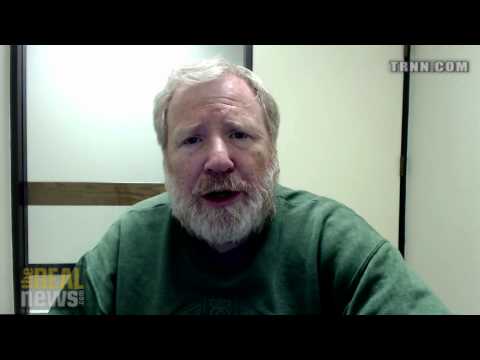 PAUL JAY, SENIOR EDITOR, TRNN: Welcome to The Real News Network. I’m Paul Jay in Baltimore. And welcome to this week’s edition of The Black Financial and Fraud Report with Bill Black, who now joins us from Kansas City.

Bill’s an associate professor of economics and law at the University of Missouri-Kansas City. He’s a white-collar criminologist, former financial regulator, and author of the book The Best Way to Rob a Bank Is to Own One.

BLACK: First thing is I’ve been warning people that Obama is trying to get the great betrayal, which is going to involve some degree of tax increases, massive cuts in social spending, and substantial cuts in the safety net. And that’s been confirmed by an odd source, Slate, and it should have particular credibility because these are folks who think it’s a great idea–they really want this deal and say that’s exactly what Obama is trying to achieve. And they say why, and it’s what we have been warning about, that Obama, they say, is obsessed with his place in history, doesn’t believe that he’s achieved one yet that’s going to bring him fame after he steps down as president, and that the only way to do this is to get this what they call “grand bargain”, what I would of course call the “great betrayal”, of Social Security, Medicare, Medicaid, and all the recipients of those social programs. So confirmation from a weird source that, unfortunately, Obama is charging hard to try to do the grand betrayal, and for precisely the reasons that we warned.

JAY: Now, what I don’t understand about that is that what he’s really going to be judged by history, I would think, apart from his foreign policy–and, you know, if he avoids any attack on Iran and any other new military adventure, I think history will judge that, to some extent, well, and we’ll see whether that’s true. But he’s really going to be judged on how he dealt with the economic crisis. And if they have this big series of cuts, everybody says it’s going to lead to more recession. So he ends his presidency with high unemployment and a continuing of a paralyzed economy, then what place in history is that? I don’t get it. So he makes a grand betrayal and gets known as the president that helped facilitate a deeper recession.

BLACK: It’s a very sad thing. So from the beginning, President Obama did not use FDR as his model, Franklin Delano Roosevelt as his model of what a successful president would be. He used Clinton and he used President Reagan, and both of them–I mean, obviously Reagan didn’t practice austerity, but he talked austerity, and Clinton practiced austerity and, you know, helped lead to the recession early in the decade through that austerity.

So this is still Bob Rubin and that entire Wall Street wing of the Democratic Party that has led the nation to disaster. Rubin was a complete disaster at Citicorp, of course, after he left the Clinton administration. And as we are speaking, the news has broken that employment in Europe has reached an all-time low, precisely because of austerity. So, yes, this is horrific in terms of austerity.

And it is also horrific–not only is he not making his place in history through what FDR did, of designing great programs that made the economy work better and made America vastly more humane; Obama perversely sees his chance of fame is ruining FDR’s legacy and beginning to unravel all of those programs.

JAY: Well, I don’t see what his place in history’s going to be other than the president that managed the country into a deeper recession, in the final analysis, if he thinks the grand bargain is what the next step is. At any rate, thanks for joining us, Bill.

JAY: Thanks for joining us on The Real News Network.