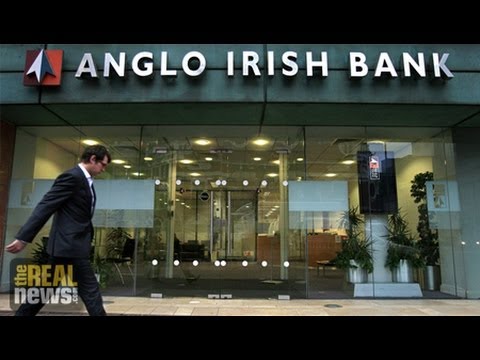 Now joining us is Bill Black. He’s an associate professor of economics and law at the University of Missouri-Kansas City. He’s a white-collar criminologist and former financial regulator, author of The Best Way to Rob a Bank Is to Own One, and a regular contributor to The Real News.

Thank you for joining us, Bill.

BLACK: I have Ireland, all of Ireland summed up in a few snippets of tape recordings that have emerged, in which the top executives of a bank called Anglo Irish, whose frauds drove the Irish financial crisis, have finally been revealed–of course not by investigators for the government, who are busy not even knowing these tapes existed, supposedly, for four years, but because the media has finally started releasing these tapes.

Now, that was significantly insane, but the tapes show something about how these negotiations (and negotiations should be in quotation marks) went on. So you’ve got the Anglo Irish executives, and their plot is: we need a number big enough that it’s scary about how much of a public bailout we need, but not so big that it’ll be obvious that it would be insane to bail us out. So they came up with a number in the EUR 7-10 billion–so that’s, you know, more like, at that time, $16-17 billion to put in initially, with, again, no due diligence and no understanding of the fact that–how big a cesspool Anglo Irish was. And one of the Anglo Irish Bank execs is asking the other, where’d you come up with this number? And he says, well, I followed the policy of our CEO and I just pulled it out of our arse. Right? So that’s the level.

And then it says they get mad with the government, because the government starts thinking that maybe it should do due diligence before it puts an absolutely unlimited guarantee out after the 15 billion, 16 billion, roughly, in U.S. dollars. And, mind you, the Anglo Irish folks had said once they give us the first slug of money, they’ll be politically trapped, because they won’t want to admit to their constituents that it’s all money down the drain, and so they’ll continue to support us once we get them hooked on supporting. So in the second group of tapes they’re discussing how they’re going to send people down to the central bank and demand their moolah, and they’re laughing and joking about how EUR 1 billion are flowing out of the institution every day.

And then, once they get that bailout from the Irish, they go, and it becomes obvious that Ireland can’t possibly pay this guarantee, because Anglo Irish and the other fraudulent Irish banks are so big and their losses are so massive that they’re not simply going to bankrupt the banks, every large bank in Ireland; they’re going to bankrupt the whole nation, because they’ve done this guarantee. And they start thinking, well, who are we really protecting with this guarantee? And the answer in large part was foreign predators like German banks. So the Irish decide that there’s only one answer. They’re either going to default or they need a bailout by the European Union. So they go to the European Union. And this really amuses the Anglo Irish executives, who are laughing and laughing about it, and then starting to sing in the background Deutschland, Deutschland, über alles, the first verses that you never sing anymore of the German national anthem before World War II because it’s really politically incorrect type anthem and such. So now the Germans are outraged that all of this has come out.

But as I say, the government has–Irish government, which is supposedly pursuing a vigorous investigation, of course is doing nothing of the kind. The CEO has fled Ireland and is hiding out in America, of all places. And the investigation was so pathetic that they either didn’t know for four years that they had these tapes, or when they listened to them thought, well, you know, who cares type of thing.

So we now have a massive political scandal in Ireland, which has become a political fight in Ireland between two of the leading parties, and we have an international scandal in which Angela Merkel, the head of Germany, purports to be outraged and talks about how these Irish bankers are operating like cynical Übermensch–supermen in other words.

So everything that she thought was true about bankers has been confirmed about the top bankers in their own words, and you can go to–our viewers can go to The Irish Independent, which has been breaking these tapes and has a series of these, and you can read the keywords, but you can also listen to the tapes yourself. And if you love those, I must tell you you should go back and listen to the tapes of Enron and the other energy traders when they were creating the California energy crisis, because they too knew they were being taped when they said these amazingly outrageous things. So, of course, I’ll leave you with a thought. If that’s what they’re willing to say when they know they’re being taped, imagine what they say when they know they’re not being tape recorded.

NOOR: Thank you so much, Bill. I will link to both of those websites.