The Grand Betrayal has Arrived 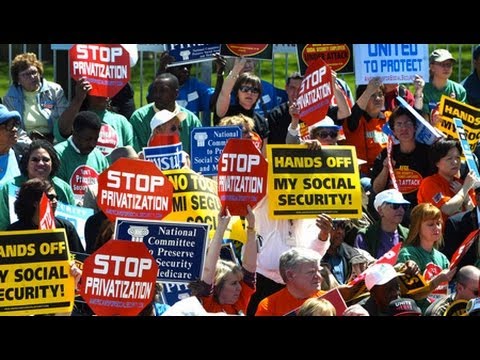 PAUL JAY, SENIOR EDITOR, TRNN: Welcome to The Real News Network. I’m Paul Jay in Baltimore. And welcome to this edition of The Black Financial and Fraud Report with Bill Black.

Bill’s an associate professor of economics and law at the University of Missouri-Kansas City. He’s a white-collar criminologist, a former financial regulator, and author of the book The Best Way to Rob a Bank Is to Own One.

JAY: So you’ve been predicting this. So tell us what this is.

BLACK: Well, what the viewers don’t know is that you chided me before we began, saying, you didn’t get this one right, you were predicting a grand betrayal, and this is the ultra-grand betrayal. And I agree that you have some, you know, facts on your side in exactly that.

Bob Reich did a column in which he said, what in God’s name is going on? I mean, even the Paul Ryan budget doesn’t call for these kinds of cuts in Social Security. Why do we have a Democratic president trashing the crown jewel of Democratic policies that has been spectacularly successful in improving the nation, in transforming old age from what it used to mean, which was grinding poverty for enormous numbers of Americans and literal cat food diets and such, and into a situation where people can live lives that are full of greater meaning and value? And it’s the most popular program.

JAY: So do we know just what–do we know what this bargain is? What does he want to do to Social Security?

BLACK: Well, we have to wait because it delayed again in the actual details. But they’ve leaked and leaked and leaked, and it’s what they claimed, you know, that they’re going to do so-called chained CPI–and that’s consumer price index. And all of this is going to substantially reduce over time Social Security benefits. And Social Security benefits are already far too small for a number of working-class Americans when they retire. So it is a terrible policy.

JAY: It’s also a double, triple whammy for retired people. I mean, interest rates are so low that your savings aren’t earning anything. It’s likely your house has depreciated. And so you–senior citizens are getting hit, like, from all directions.

And the leaks are calculated and show that it’s exactly what we warned in terms of motive. So the leaks are about how the president is taking a political risk of alienating his base and upsetting progressives. Well, he deliberately wants to upset progressives. Obama runs against the Democratic wing of the Democratic Party. His hostility for it is palpable. And he has long expressed this desire to begin to unravel the safety net. And why? Because of his legacy. And they are open about this in terms of their press flaks, that they believe that President Obama’s place in history will come because he had, as they claim it, the political courage to go against the interests of his own party, the interests of the American people, and to begin to create Wall Street’s greatest dream, the unraveling of the safety net of Social Security and its eventual replacement by private investment accounts that are going to lead to Wall Street.

JAY: Now, President Obama’s defenders will argue that he’s going to get a tax increase on the wealthy, and that without this kind of a compromise, you could never get the tax increases.

BLACK: Well, a further tax increase on the wealthy would be the sixth act of austerity. So, I mean, this is completely insane as a matter of economics. Right?

So the first thing they did way back, a couple of years ago, was to dramatically cut the growth of federal spending at the worst possible time, during the Great Recession. And, of course, as we’re speaking, the employment numbers have just come out late last week, and they are horrific. And what we’ve seen over the entire course of the Great Recession is that essentially all of the reduction in the unemployment rate was produced by people withdrawing from the labor force because they’re so discouraged about working.

JAY: Now, Bill, you keep saying that the tax on the wealthy is another measure of austerity, but it depends what you do with the tax revenue. If you–.

JAY: Well, if you take the revenue and use it for stimulus, it’s not an austerity [crosstalk]

BLACK: There is no plan to do that. I mean, stimulus is not I have a particular program. Stimulus is the macroeconomic number, how much are we spending. And the answer is: he is proposing net significant reductions in social spending and tax increases. Both of those things are acts of austerity. So, no, there is no offset.

JAY: But I’m saying he may not be using that way, but we know the wealthy do not spend even a fraction of their wealth. It doesn’t circulate. So if you tax it and then you use it for keeping more teachers or whatever, give more subsidies to cities or states, that’s more like–that would not be a measure of austerity [crosstalk]

BLACK: You could, of course, have a completely different program than Obama has.

JAY: No, I’m hearing you that they don’t do that. I’m just saying taxing the wealthy isn’t inherently an austerity plan.

BLACK: No, no. But no one has said that. What we’re saying is in the circumstances we find ourselves today, if what you do net is increase taxes–and remember, the increase in taxes was–the dramatic increase in taxes was on working-class Americans. That’s what the payroll tax–that is our most regressive tax in all of America. And Obama didn’t even try to say that, as a matter of official policy. And that has had very substantial effects already. I mean, there were already estimates by economists that that would all by itself take away a half percentage point of growth. And as I said, it’s not alone. It is the death of these continuing cuts, the imposition of greater and greater austerity.

JAY: But the argument you’d get from President Obama’s supporters, I think, or from President Obama, is that he agrees with this idea that in the long term Social Security’s not sustainable, that the population’s getting older, and while Social Security’s supposed to pay for itself, they show you this graph that, you know, eventually it doesn’t, and so on. So doesn’t there need to be some kind of reform, they would say?

The question is: can we afford as a society to make good on the promises of Social Security? And the answer is: yes, and we can do so with relative ease. And, of course, one of the particularly easy ways would be to stop invading people, which costs massively greater than Social Security.

But in any event, in the current circumstances, funding Social Security, given the fact that we have a sovereign currency, would have no effect in causing any of these problems, and it would actually–if we increase Social Security benefits for the people who are poorest, which would be an excellent thing, again we would spur the recovery and we would make the Social Security funding system even sounder because we would have greater income.

But we should not continue to tie Social Security to a pay-as-you-go idea based on the most regressive tax in America. That is an obscenity, and a Democratic president should understand that. I guarantee you that the economists talking to him understand that.

And again what’s really going on, as you’ve mentioned, is there is a Wall Street wing of the Democratic Party. This is the Bob Rubin and such. And their goal–I mean, they’re clear about it. They want ultimately to privatize, or at least largely privatize Social Security. And that is the greatest dream and Christmas present you could ever give to Wall Street, ’cause then you’d have all these private accounts that they would manage, and they would get massive fees measured in the hundreds of billions of dollars over, you know, decade type of thing, and they are all salivating. And they don’t just sit in a corner and salivate; they spend money, they spend time with reporters and such, and they create this fiction of a crisis in Social Security. And indeed they’ve–you know, we have talked to students all the time. They have successfully scared large numbers of students into believing that they’re never going to see Social Security, which is ridiculous.

All we need to do is maintain the political defense. But to do that, of course, the president should have been out there praising Social Security, rather than picturing Social Security and Medicare and Medicaid and food stamps as the problem. If we did not have those four programs, the United States would have been thrown back into something very akin to the Great Depression. And the amount of human misery at this point, we would literally have people starving to death in America on a frequent basis.

JAY: Alright. Thanks for joining us.

And don’t forget we’re in our matching grant fundraising campaign. There’s a Donate button somewhere around this video player. We have a matching grant of $50,000. So up to another $50,000, every $1 you donate will get doubled.