In contrast to workers and homeowners, banks fully recover from the financial crisis.

In contrast to workers and homeowners, banks fully recover from the financial crisis. 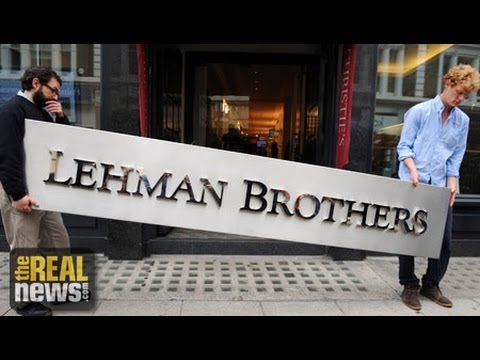 JESSICA DESVARIEUX, TRNN PRODUCER: Welcome to The Real News Network. I’m Jessica Desvarieux in Baltimore. And welcome to another edition of The Bill Black Report.

Now joining us is Bill Black. Bill is an associate professor of economics and law at the University of Missouri-Kansas City, and he’s also a regular contributor to The Real News. Thanks for joining us, Bill.

DESVARIEUX: So, Bill, it’s been five years since the collapse of Lehman Brothers, and it’s on record that these too-big-to-fail banks are much larger now.

And let’s take a look at this statistic. The six largest banks have $9.6 trillion in assets, which come to 58 percent of GDP. That’s a pretty big number, Bill.

Can you talk a little bit about these too-big-to-fail banks and how much bigger they are now? And why are the banks larger now? And wasn’t Dodd-Frank supposed to resolve all of this?

Second is that banks this large have an implicit federal subsidy in the U.S. context, or national subsidy in other contexts, that allows them to outcompete their competitors because of the unfair advantage of that guarantee. So a group of very conservative economists, their metaphor for this is that it’s like bringing a gun to a knife fight, and they say that there’s nothing free about free markets–and, again, these are folks that worship free markets–because there are no free markets when you have this implicit federal subsidy.

So it’s critical to fix it, they’ve refused to fix it, Dodd-Frank doesn’t even begin to address fixing it is the answer on that part of the problem.

And this is why you’ve seen that virtually all of the income gains since the crisis in the United States have gone to the top 1 percent of the population, and the top 1 percent is actually heavily driven by the top 0.001 percent, which got the overwhelming amount of those gains, and they are overwhelmingly folks in big finance and CEOs of major corporation.

And the third thing that was driving our crises they also haven’t fixed, and that’s the three de‘s–deregulation, desupervision, and de facto decriminalization. To take it in reverse order, there was still, five years after Lehman, not a single prosecution of an elite banker that drove the crisis. In terms of desupervision, we still appoint our supervisory heads primarily on the basis of people who refuse to engage in any crackdown, and indeed they went so far as to adopt officially the too-big-to-jail principle, which is, of course, the death of any accountability. And on deregulation, well, you might say, hey, there’s certainly been a change there. You do have Dodd-Frank, and it does call for the creation of over 1,000 regulations. And that’s true, but very few of those regulations are addressed to the things that actually caused the crisis.

To the extent there are a few regulations that address what actually caused the crisis, only one of them has actually been fully implemented. That deals with liars’ loans. And that’s a good thing. Liars’ loans were endemically fraudulent. But it doesn’t fix the problem that there are many assets you can use to run the scam. And this is only one of the assets they cracked down on.

So a little mixed story on regulation, but on the other parts of the de‘s, the desupervision and the de facto decriminalization, it’s actually gotten far worse than, for example, our response to Enron.

DESVARIEUX: Okay. We’ll continue this conversation in our extended version of this interview. So we invite our viewers to click on the link to the extended interview.

But, Bill, thanks so much for joining us. We’ll continue this conversation.

March 5, 2020
Sign Up for Our Newsletter
Help Us Make Real News!