Bill Black: Obama susceptible to attack by Romney because he failed to deal with systemic risk to financial system - even though Romney would be worse

Bill Black: Obama susceptible to attack by Romney because he failed to deal with systemic risk to financial system - even though Romney would be worse 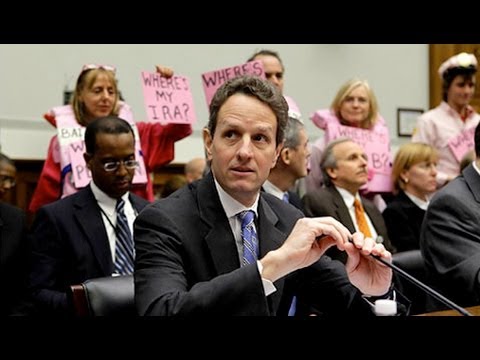 PAUL JAY, SENIOR EDITOR, TRNN: Welcome to The Real News Network. I’m Paul Jay. And welcome to this week’s edition of The Black Financial and Fraud Report with Bill Black.

Bill teaches at the University of Missouriâ€“Kansas City, and he’s author of the book The Best Way to Rob a Bank Is to Own One. Thanks for joining us again, Bill.

BLACK: Well, we see the perils of not doing the right thing when you come to the debate. So the absolute critical thing that most everybody agreed with out of this financial crisis was the devastating role of systemically dangerous institutions. These are the so-called too-big-to-fail institution, except, of course, that three of these massive investment banks failed: Bear Stearns, Lehman Brothers, and Merrill Lynch. And major banks, like Bank of America and Citicorp, failedâ€”Citicorp, for the third time it got bailed out by the federal government. So, you know, the American people would have loved it if we had taken on the largest banks.

But here’s where we have, you know, the terrible role of Timothy Geithner, Treasury secretary, and what Axelrod described as the mancrush that President Obama developed for Treasury Secretary Geithner. So Geithner, as we now know for sure from inside accounts by Barofsky and Sheila Bair, is the guy that was pushing from the beginning to not only subsidize the biggest banks, but stop investigations of the biggest banks and stop regulation wherever he could of the largest banks. And so while the Doddâ€“Frank bill did not in fact do what Romney said, which is, you know, to ensure too-big-to-failâ€”.

JAY: Yeah, I just want to break in here, ’cause Romney said this several times during the debate, that Doddâ€“Frank picks five big banks and guarantees they will be rescued in another crisis, and President Obama did not refute that even a single time. What is that?

BLACK: Nor did he refute the part about the Medicare grab on taxes and such, and which was completely false as well.

JAY: But focus on this issue of rescuing these five banks. Are we missing something here in Doddâ€“Frank? Or is Romney just making this up?

BLACK: Romney is making this up. And what you see is a presidentâ€”you know, the debilitating thing about being a president is that for four years no one has gotten in your face and said, not only are you wrong; you’re dead wrong and you’re getting run over and you’ve got to start acting right and such. And so when somebody actually goes forcefully and says things that are just outright lies, Obama doesn’t even fight back on lie after lie after lie.

JAY: Which, as you say, he hasn’t. But there is another side to this, in a sense, which is Obama knows in spite of what Doddâ€“Frank says and in spite of his own rhetoric about, you know, we’ve solved this problem ’cause we know how these institutions have living wills and all this kind of business, Obama knows that they can’t let these big institutions go down without crashing the whole system. They haven’t created any kind of alternative structure.

BLACK: Well, but that’sâ€”I mean, that’s half right. No one proposes that the institutions go down. What they propose is this: the really insolvent onesâ€”the Bank of Americas and the Citicorpsâ€”should go through receiverships, just as we put thousands of financial institutions through receiverships, and then it should be sold in ways that dramatically shrink itâ€”in other words, it should be broken up into pieces. And you shouldn’t allow a huge institution to acquire it, because that just makes them all the bigger.

But the othersâ€”there are roughly twenty of these systemically dangerous institutions in the U.S., roughly 25 outside the U.S., maybe 50. Those should, first, not be permitted to grow at all. And we’re doing the opposite: many of them grew dramatically by being acquirers, making the problem even worse. Anyway, stop the growth. Force them, within five years, to shrink to the level that they no longer pose a systemic risk. That means roughly under $50Â billion in total assets. So they’ll still be very large corporations, and they’ll actually be more efficient. So this is a win-win available to us.

And third, in that interim period of the five years, really intensively examine them and regulate them and, you know, bring in people like the folks that used to regulate in the savings and loan crisis that actually believe in regulation.

If you do those three things, he would have been a hero to the American people; Romney wouldn’t have been able to pull any of this stuff. And, of course, Obama could announce that today, that program, right? There’s nothing that stops him from doing so.

JAY: Well, there’s one thing that stops him from doing that, which is he’s trying to raise money for his election campaign on Wall Street.

BLACK: That’s absolutely right. Again, he could be a transformational president instead of one in a long line of Wall Street presidents.