Black: Too Big to Prosecute and It’s Obama’s Fiscal Cliff 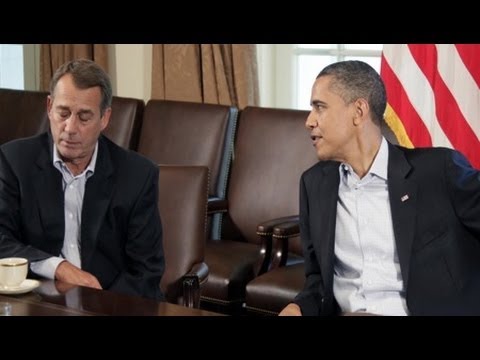 PAUL JAY, SENIOR EDITOR, TRNN: Welcome to The Real News Network. I’m Paul Jay in Baltimore. And welcome to this week’s edition of The Bill Black Financial and Fraud Report.

And Bill now joins us from Kansas City, where he is a professor of economics and law at the University of Missouriâ€“Kansas City. He’s a white-collar criminologist, a former financial regulator, and author of the book The Best Way to Rob a Bank Is to Own One.

JAY: So what are you following this week?

BLACK: Well, this week they’ve added UBS, the giant Swiss bank, to the ranks of the criminal enterprises that are admitting that they committed massive violations of the law. So, to review the bidding, HSBC, the largest bank in Europe, had for at least 15Â years been violating the law in three areas. One, it was helping the most violent drug cartels in Mexico launder massive amounts of money. Two, it was helping nations like Iran and Sudan evade U.S. financial sanctions. And three, it was helping organizations the United States considers terroristâ€”Hamas, Hezbollah, and al-Qaedaâ€”evade financial sanctions.

Despite these massive violations, the United States Department of Justice said: not only will we not bring a criminal case against HSBC; we won’t bring it against its officers, and we won’t even bring it against former officers, because it’s too big to prosecute. And the newly appointed head of supervision, banking supervision in the United Kingdom, said, yes, that’s right; this entity is too big to prosecute. So we have the official insanity that they’ve decided that in the interest of banks’ stability, we need to leave felons in charge of the largest banks in the world.

Then came UBS. And UBS is an entity that’s been bailed out multiple times and also admitted to committing large-scale felonies in terms of tax evasion against the United States, where again it got a slap on the wrist. This time it got another fine and slap on the wrist.

But one entity, a Japanese affiliate, will be prosecuted and two individuals, both of them relatively down in the food chain, but one of whom while quite young making the mistake of emailing other employees engaged in the fraud. And this fraud was fixing the Libor rateâ€”that’s the most important rate in the world, in whichâ€”a massive amount of financial contracts are priced off of thatâ€”and they engaged in just a naked cartel to fix the price of that Libor index. Well, this particular individual who’s being prosecuted sent emails to other people engaged in the fraud, urging them not to cooperate with the FBI investigation. And that of course got him on the list of we’re going to find a way to put you in prison. So two trivial guys and one obscure affiliate, but otherwise, UBS won’t be prosecuted either.

JAY: Let’s go back to the money laundering thing and the drug cartels and such. First of all, these aren’t the only banks that have been involved in money laundering. Some of these big banks have been caught in the past. Am I right? And is there anything in all of this that would stop them from doing this?

BLACK: Well, yes. Many banks have done it. Yes, HSBC did it for many, many years, and it did it after repeated warnings from government, and from even internal employees. But they didn’t want to stop doing it, because, of course, they were making a lot of money. And in particular, the officersâ€”who, after all, decide these thingsâ€”were making big money in the form of bonuses and such. And those people don’t even have to give back their money. Only a couple of obscure compliance people will have to give back their money.

So what have they done? These entitiesâ€”well, Barclays just hired the former head of supervision in the United Kingdom, someone who is notorious for absolutely refusing to enforce the laws, and he is their guy in charge of compliance. So I’m sure that’s going to make everything better.

JAY: That’s brilliant. Okay. What else you watching this week?

BLACK: Well, we’re headed into the next year. Right at this point, it looks like the grand fiscal cliff negotiations won’t succeed before the end of this year.

I’ve just done a piece, you know, that asks the question, since everybody agrees now that the fiscal cliff is incredibly stupid and really dangerous, in the sense that it’s designed to impose austerity, and they’re saying that if we were to continue this austerity for very long, we would throw the nation back into recession, I went back and looked. How did we come aboutâ€”you know, who’s the moron that created this fiscal cliff that they’re talking about? And it turns out it’s President Obama. And it’s not only President Obama that insisted on this, but he insisted on the fiscal cliff for the express reason that it would create what he called “discipline”â€”what I would call extortionâ€”on liberals to vote in favor of beginning to unravel the safety netâ€”Social Security, Medicare, Medicaid, and food stampsâ€”’cause if they didn’t, lo and behold, there’d be this fiscal cliff and all kinds of social programs would be gutted. So throw Grandma under the bus was the logic.

JAY: So you’re saying it wasn’t meant to target the Republicans into a crisis; it was actually more meantâ€”more progressive Democrats to stampede them into a crisis.

So we’re left with the following forms of insanity. First, that President Obama is the leading person who created this fiscal cliff to deliberately create this danger of austerity throwing the nation back into recession. Now he agrees that’s insane.

So what is his proposed solution? Even greater austerity through an agreement with congressional Republicans. So, you know, Obama would have been destroyed politically and United States would have been thrown back into a great recession if Obama had been able to get the austerity he was seeking back in JulyÂ 2011 through what he called the grand bargain and I call the great betrayal.

December 10, 2019
Sign Up for Our Newsletter
Help Us Make Real News!