Bill Black: Romney's Secret Plan; the 1% Now Have More Wealth than the bottom 90%

Bill Black: Romney's Secret Plan; the 1% Now Have More Wealth than the bottom 90% 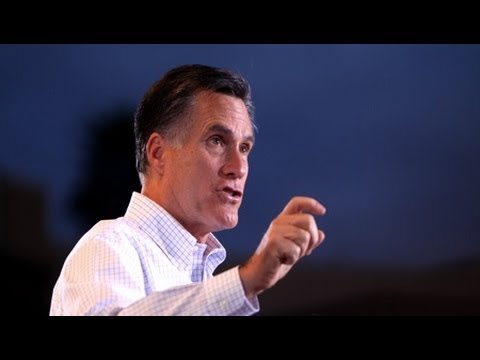 PAUL JAY, SENIOR EDITOR, TRNN: Welcome to The Real News Network. I’m Paul Jay in Baltimore. And welcome to The Black Financial and Fraud Report with Bill Black, who now joins us from Kansas City, Missouri.

Bill is associate professor of economics and law at the University of Missouriâ€“Kansas City. He’s a white collar criminologist, former financial regulator, and author of the book The Best Way to Rob a Bank Is to Own One. Thanks for joining us again, Bill.

JAY: What do you got for us this week?

BLACK: Well, what we have is one of the successes of the Occupy Wall Street movement. One of the things we know that Occupy Wall Street actually did accomplish was to get the issue of inequality keyed up as a national issue. And that has proven to be important in the political debates. And I’m going to talk about the intersection of inequality with three secret plans that Romney and Ryan have talked about and why the inequality thing has caused them so much grief.

So the first secret plan, of course, is that this thing to bring down the budget deficit while decreasing taxes and while increasing defense spendingâ€”in other words, the three contradictory things that Reagan promised, that heâ€”of course, his budget director, David Stockman, ultimately admitted was all a lie. He used the magic asterisk to mask it and such.

And here’s the reason they have to refuse to answer: because (A) the math doesn’t add up; (B) if they told you the programs they would have to kill to be able to generate this roughly $10Â trillion in additional income, it would be immensely politically powerful, popular programs, and it would cause a dramatic increase in inequality. So to really go after and get these numbers by killing deductions, you’d have to go, for example, against the earned income tax credit, which is the biggest single thing we have for very low income working-class people. These are people who do have jobs, who do make income, but not very much income at all. They’re typically very close to minimum wage.

JAY: And usually these are minimum-wage earners with kids and families, where the wage simply could never cover the monthly cost.

BLACK: Right. So this is the trap. Romney and Ryan now, because of inequality being raised as a big issue, have to say, our program isn’t for the rich; we’re going to offset any gains that the rich get by tax increases for the rich, and we’re not going to do anything that hurts the middle class or the working class.

Now, that is impossible to do, mathematically, and that’s why they had to come up with this secret plan. And they’re starting to get increasing grief about the fact that they refuse to tell us. The classic one was on Fox News, of all things, where Ryan was asked what his secret plan was and said he didn’t have time to tell because it involved mathâ€”a purely hilarious answer.

Now, the second secret plan is also in Ryan. So Ryan says, I’m going to cut taxes and this is going to create just enormous number of new jobs, and therefore lots of income, and therefore the budget deficit is magically going to disappear. So this is the old Reagan argument, Bush argument: if we cut taxes, actually we’ll get such a surge in profits that we’ll get more tax revenues. And, of course, it’s never proven to be true in the past, and can’t work in the present as well.

So that’s his secret plan is he just ordered the Congressional Budget Office to assume that things that no economist believes will happen will happen. If you take that magic income out of his plan, then his proposal to cut public purpose spending means that you have to essentially eliminate all kinds of things, including, for example, Pell Grantsâ€”these are the grants for higher education.

JAY: This is what he promised in the debate, he wouldn’t do that.

BLACK: That he would expand, if anything, Romney saidâ€”I want to be there protecting Pel grants and expanding Pel grants. But he’s got a vice president who’s (A) voted against it, (B) criticized it, and (C) has a plan that, once you get rid of the phony income, is going to probably eliminate the Pel grant.

JAY: And phony income being an assumed growth there’s no reason to think will take place.

BLACK: Which has never taken place with similar tax cuts in any nation at any time in history.

BLACK: And that’s the one that is this third secret thing. And, of course, The Washington Post has done a story that shows that the numbers are completely made up. One of the Romney economists admitted that the numbers don’t work. So all of these things, as soon as you expose them to the light of day, they go poof because they’re all imaginary.

And, of course, this is what he has to be pushing, again, because he has to be saying, equality, equality, equality, we’ve got to help the lower class, we’ve got to help the working class, we’ve got to get them jobsâ€”he used that phrase in both debates, my big priority is to get them jobsâ€”except that if you remember his five-point plan, he says, I’m going to balance the budget, I’m going to eliminate the budget deficit. Well, what has Romney said would happen if he were to do that? He was asked elsewhereâ€”months ago, but this is, you know, in a number of my articlesâ€”he says, if you were to do that, eliminate the deficit, it would throw us into recession or depression, so of course I’m not going to do that. Now, that is an exact quotationâ€”or at least as close as memory allows, and maybe I got an article wrong, but that’s exactly what he said. So he’s promising a plan which he has said would be a disastrous plan that, like Europe, would throw us into a gratuitous recession and increase unemployment dramatically, and saying that that’s his plan to cut unemployment.

And what did theâ€”finally, the numbers that just came in in the New York Times article very recently that showed thatâ€”in the first year of recovery from the recession, which was taking place under President Obama, of the gains in income, 93Â percent of those gains went to the top 1Â percent in wealth. And we are in the greatest period of inequality, measured since the Great Depression. And in terms of wealth, as opposed to income, the top 1Â percent now have greater wealth than the bottom 90Â percent of us in America.

So while we can justly criticize that Romney and Ryan would make inequality worse, under this administration inequality has reached record levels. And you can see from all of the inside story things that are coming out from Barofsky, from Connaughton, from Sheila Bair, that the programs have notâ€”of the Obama administration have overwhelmingly not been designed to help regular people, as opposed to, in the infamous phrase of Timothy Geithner, the Treasury secretary, to foam the runways to protect the banks from crashing and burning.