Bill Black: Larry Summers theory of finance: banks are too brilliant to fail and regulators are idiots.

Bill Black: Larry Summers theory of finance: banks are too brilliant to fail and regulators are idiots. 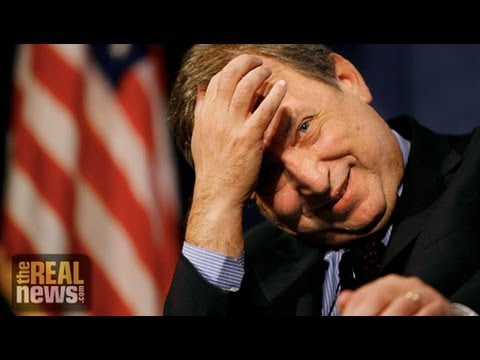 Now joining us is Bill Black. He’s an associate professor of economics and law at the University of Missouri-Kansas City. He’s a white-collar criminologist, a former financial regulator, and author of The Best Way to Rob a Bank Is to Own One. He’s also a regular contributor to The Real News.

But I–caused me to look back at Larry Summers, not in terms of what he did in terms of deregulation, but what was his explanation for why he did it, what’s his theory, in other words, of regulation. And it comes down to brilliance versus, in his phrase, idiots.

And, of course, the classic example that he gave was in creating the regulatory black hole known as the Commodity Futures Modernization Act of 2000, which he was all in favor of. And this is to remove all regulatory authority over these complex financial derivatives.

And so what he’s missed, of course, is that corporations don’t make decisions and they don’t implement decisions–people do. And the officers could be quite sophisticated, and they could be ripping off the corporation and the firm, which is precisely what we saw all through this crisis.

So in the first level, Summers has forgotten that it’s not a question of intelligence; it’s the fact that the only people that can protect the corporation from loss are the very senior officers who are looting the corporation. So he missed it, I argue, on that whole concept of intelligence.

But he goes beyond that. He explains why he didn’t believe in modern finance. And this is something that he got some credit for, indeed should get some credit for, because, after all, the UChicago folks were even crazier. They had this this view of markets of always self-correcting and always being on the direction towards perfection. And Larry Summers’ position was that that was wrong. But if you look back at why, he actually said it this starkly in a meeting: there are idiots. In other words, markets would be efficient but for idiots. And, again, this misses the entire concept of fraud by sophisticated CEOs. So it’s consistent with his general view that IQ is what all of this is about.

And his final example is that he wants the regulators, the financial regulators to be given the equivalent, if you think of them as doctors, of only bone saws, things, you know, that are really rough and ready, no precision, certainly no scalpels, and certainly no laser surgery, because regulators aren’t very bright, whereas the industry is really bright and therefore will always be ahead of the regulators–except that’s that’s not true. It certainly wasn’t true in the savings and loan debacle, where the markets got it wrong consistently. It certainly wasn’t correct in the Enron era, where they got it wrong consistently. And it wasn’t correct in this one. Indeed, there’s testimony in front of the Financial Crisis Inquiry Commission that the Federal Reserve economists–and these are guys who really wanted the markets to be smarter than the regulators–did a study, and they couldn’t find a single example. There’s also testimony from the head of the office of the comptroller of the currency, another guy who didn’t believe in regulation, who said, well, the only guys in our shop that got it right were the little guys, the examiners, who, of course, are closest to the facts.

NOOR: And, Bill, yet it still seems like he’s a frontrunning candidate for this position.

BLACK: Yeah. I have another piece. I have one piece on this brilliance, but another very recent piece on the fact that there’s a steady campaign of leaks that’s trying to denigrate one of President Obama’s rare senior women appointees, Janet Yellen. And, of course, the leaks are coming from Obama’s White House. Why he would attack his own appointee who is getting brilliant track record, it’s beyond me.

But it turns out that Clinton–that was an appropriate mistake–Obama’s economic team is just like Clinton’s economic team. It is composed–the top leadership, which is six folks, is composed entirely of Rubinites, and, of course, the leading Rubinite these days is Larry Summers. So it’s no surprise that the White House economic team is all for Larry Summers. And, you know, they got appointed as head because they have such a terrible track record, but they’re willing to say whatever the administration wants said.

William K. Black, author of THE BEST WAY TO ROB A BANK IS TO OWN ONE, teaches economics and law at the University of Missouri Kansas City (UMKC). He was the Executive Director of the Institute for Fraud Prevention from 2005-2007. He has taught previously at the LBJ School of Public Affairs at the University…