Bill Black: As Ecuador votes for new president, the stimulus policies of current president Correa have kept Ecuador out of recession

Bill Black: As Ecuador votes for new president, the stimulus policies of current president Correa have kept Ecuador out of recession 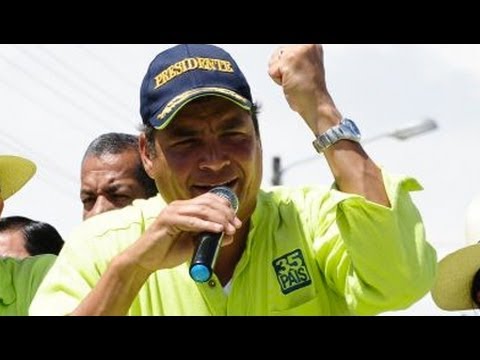 PAUL JAY, SENIOR EDITOR, TRNN: Welcome to The Real News Network. I’m Paul Jay in Baltimore. And welcome to another edition of The Black Financial and Fraud Report with Bill Black, who now joins us from Kansas City.

Bill is an associate professor of economics and law at the University of Missouri, Kansas City. He’s a white-collar criminologist, former financial regulator, and author of The Best Way to Rob a Bank Is to Own One.

JAY: So you’ve been writing recently about how Ecuador’s been dealing with the recession, and you think there are some things to learn. What is that?

BLACK: Yeah. I was writingâ€”I was prompted by a article in The Economist which was exceptionally hostile to President Correa and what was being done in Ecuador. So I have actually been there several times recently, so I decided to research. And there wasn’tâ€”hardly any data in The Economist‘s study.

What I discovered is that Ecuador should have been in, you would think, terrible trouble with the Great Recession. First, the United States is its leading trading partner. Its leading export is oil, and, of course, our oil consumption was down quite a bit.

And the other major source of foreign funds in particular is what is called remittances, which is what Ecuadorians living in other countries send home to Ecuador. And the two leading places that Ecuadorians have emigrated, one is historically the United States, which, again, was in a great recession, but of late it’s far more Spain. And Spain isn’t simply in a great recession; the austerity programs have thrown it into Great Depression levels of unemployment, where unemployment’s over 25 percent, and young people, the unemployment rate is 55 percentâ€”just extraordinary.

So remittances were down, oil sales were down, oil prices were down, and you would have thought Ecuador would have been really trashed. But President Correa, who is an economist by trainingâ€”has a PhD from the United States, a master’s from a Belgian university, and an Ecuadorian degree, all in economicsâ€”responded in what turned out to be the classic win-win-win that is offered by a severe recession, and that is he increased spending in three major categoriesâ€”education, health, and public infrastructure.

And public infrastructure in Ecuador is not only grossly inadequate; it’s really quite dangerous in terms of the roads. And, of course, it’s a nation that is incredibly mountainous and is prone to terrible flooding, which destroys dirt roads. So this has been a major effort. And, by the way, he worked on bridge safety as well, something the United States desperately needs to do, and built vital airports.

The result of all of this was that within one quarter of going into recession officially, Ecuador was coming out. And indeed, for the entire year it actually had positive growth instead of negative growth, which of course is the absolute norm in a recession. And since then, it’s rebounded to have a growth rate that’s varied between double and three times the United States’ growth rate.

And as a result, President Correa was actually, in the kind of polls that they run, the most popular elected leader in all of the Americasâ€”that’s North America, Central America, and South America combined. He was the single most popular leader and is widely expected to win an outright majority and avoid a runoff.

JAY: Bill, has this made it any more difficult for Ecuador, one, to borrow money internationally? And two, Ecuador does use the U.S. dollar. Does that help or hurt? Maybe it helps in some ways, ’cause one of the reasons countries in theory don’t do this kind of spending is they’re afraid of, you know, a selloff of their dollars or currency.

BLACK: That is an interesting question. Again I think Correa has that one right as an economist. It’s actually very bad not to have a sovereign currency. I’ve explained this several times to the viewers in the context of the euro and giving up the sovereign currency. So this is an extra degree of difficulty that Correa has had to deal with that dramatically reduced the scope of what he could do, and he still succeeded. So his joke, or the joke in Ecuador, is that the only thing more popular than Correa is the dollar.

So this is one of those odd things. The dollar is actually a problem for Ecuador, being dollarized, but the Ecuadorian people love it. And so, you know, thereâ€”it makes no sense, if you’re an elected official, to try to get rid of something that the people absolutely love. So Correa has criticized the dollar but said, you know, look, I’m a pragmatist, and the people love it and such, so, you know, we go forward with the dollar.

JAY: But does this play a role in somewhat protecting Ecuador from a run on their currency as a result of all this spending?

BLACK: No, because thatâ€”it doesn’t provide any protection in that regard. What protects Ecuador from those kind of attacks is that because they lack a sovereign currency, they simply can’t run large deficits. And they don’t. They have a very tiny deficit. So Correa has not done this by goosing the deficit. And as one of your questions implied, they repudiated some debt.

Now, actually, they didn’t repudiate most of their debt; they had a commission to look into certain debts that had already been negotiated that they declared that had been done in violation of Ecuadorian law and that those bonds were actually unlawful. They repudiated those debts, and then they repurchased those debts, or at least 94 percent of those, at about somewhere around 30 cents on the dollar.

JAY: So how’s he paying for the new spending?

BLACK: Ecuador is an important exporter of oil, and the price of oil has gone up. So that’s part of it. But he has also done a whole series of reforms to the deals that Ecuador had with the oil companies, which were, as you would guess, incredibly one-sided, and Ecuador got only a really tiny percentage of the proceeds. Well, now it gets a much higher percentage of proceeds.

Correa also made it a priority to improve their equivalent of the IRS. And so it now collectsâ€”especially from corporationsâ€”far more taxes that used to be evaded and such. These are all, again, good things that the United States could learn.

And as I said, the consequences for the lives of everyday Ecuadorians are dramatically improved. The chances that your kid is going to school is way up. The chances that when you’re sick you get health care are way up. The chances if you’re one of the indigenous people that used to be forgotten that you get services is way up. The vice president of Ecuador is paralyzed from the waist down and in a wheelchair and has led a movement to bring the disabled in Ecuador far more into the mainstream, and this too has been tremendously successful.

JAY: Okay. If you want to ask Bill a question or make a comment, Tweet it to me, or you can email it to me at contact (at) therealnews (dot) com, or you can Tweet me @PaulJay_TRNN, and we will ask Bill your question and we’ll get him to comment on it next time we talk.