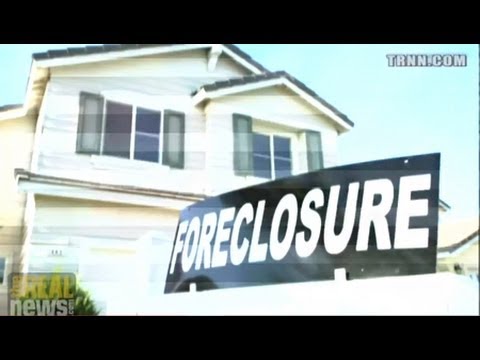 The collapse of the housing bubble and subsequent fallout have been depicted as a black swan event that no one can predict. But according to revelations in the Financial Crisis Inquiry Commission, thousands of home appraisers were warning Washington officials of widespread fraud in their industry seven years before the crash.

Now joining us for this latest installment of The Black Financial and Fraud Report is Bill Black. He’s an associate professor of economics and law at the University of Missouri-Kansas City. He’s a white-collar criminologist and former financial regulator, author of the book The Best Way to Rob a Bank Is to Own One. He’s a regular contributor to The Real News.

NOOR: So, Bill, you recently said the following two sentences from the Financial Crisis Inquiry Commission explain the entire housing crash. From 2000 to 2007, appraisers ultimately delivered to Washington officials a petition signed by 11,000 appraisers. It charged that lenders were pressuring appraisers to place artificially high prices on properties. According to the petition, lenders were blacklisting honest appraisers and instead assigning business only to appraisers who would hit the desired price targets. Bill, I want to ask you: the housing bubble has often been depicted as a consequence of investor frenzy and crowd psychology, and thus no one group or institution is responsible for rising prices. What is your response?

BLACK: Well, there is a group that is responsible, and it is the fraudulent lenders. And the way they did it had basically two barrels. The first barrel was appraisal fraud, and the second was liars loans. And we know that it was overwhelmingly lenders who put the lies in liars loans.

This particular–it’s a two-piece article that I did on the appraisers–it was quite humorous, because the very day I put the first article in, I was on a radio interview with a representative of the 100 largest financial institutions, and he started the whole thing out by saying, gosh, nobody could have predicted this one, and then what you just said, it was just people going sort of crazy, and you had a bubble, who could thunk it type of thing.

But what we can tell from the Financial Crisis Inquiry Commission is that well before 2000–it takes time to generate a profession, to create a petition, to get thousands of signatures on it, but certainly by 2000 they had made public–and, you know, this wasn’t hidden. Their whole point was to make it public and to eventually walk it to Washington around the power centers and tell people, look, there is widespread appraisal fraud, and it’s coming from the lenders, and here’s how they do it. If we don’t inflate the values to make the loan look like it’s a good loan, they put us on a blacklist and they never use us again. And, by the way, they also tended to stiff them on the price, you know, never pay the fee to the honest appraisers as well.

Now, if you step back and think about this, this is immensely revealing, because only lenders can create widescale appraisal fraud. And second, no honest lender would ever inflate an appraisal. That’s for an obvious reason. The appraisal is your great protection. Right? Home lending is secured lending, and the security property is the house. So if the house isn’t worth as much as the loan, you don’t have a very good security. So honest lenders would, if anything, be very conservative about valuing homes.

When you find this kind of fraud, you know there’s an underlying mortgage fraud. And we’ve talked about that many times with the viewers, and that’s the good old fraud recipe. Step one, grow like crazy; two, by making really crappy loans, but at a premium yield. Well, if you’re going to make really crappy loans, you need to inflate the appraisals, often, to make them look like they’re good. Third ingredient is extreme leverage. That just means a whole lot of debt. And the fourth is not setting aside any reserves. And as we’ve emphasized, that creates a sure thing, where the firm is guaranteed to report record profits in the near term.

And we’ve explained that if a bunch of firms do this–and hundreds of them did (that’s what the the appraisers tell us as well)–then you’re going to hyperinflate a bubble. If you hyperinflate a bubble, then you can keep this fraud scheme going a very long time, ’cause when bad loans are about to default, you simply refinance them. And again, the inflated appraisals make that very easy.

So not only were there warnings; there were warnings from ultracredible people, the appraisers, that explain exactly how it had happened and were made public in 2000, the year 2000, when there was plenty of time to deal with it. In other words, the warning came well before Enron’s collapse. This came a crisis before this one, where we could have easily stopped it.

I have an article as well, the second piece, that discusses an article in 2009 that shows the reaction of the regulators, the FBI to these warnings. It doesn’t talk about the appraiser warning directly, unfortunately, but it has other things that flow from the appraisers’ warning. And here are the two key takeaways. The regulators did nothing effective. Imagine that as a regulator. First, it’s kind of a hint that they’re called liars loans, and second, the appraisers come to you and give you ironclad evidence that there’s widescale fraud by the lenders, and you do not act.

But in some ways even more insane is the FBI reaction. It’s an anonymous official, unfortunately, because the FBI official insisted on it. But again, he’s speaking in 2009. And he says, no, no, of course we didn’t look at that stuff, because that’s just a regulatory matter. Right? So you bring evidence that you could introduce in court–which we did introduce in court back in the savings and loan debacle–to convict CEOs of lenders of these frauds. And the FBI has become so weak, because it gets no good guidance from the regulators, that it says, well, so what? I mean, why would we investigate? And so the article also makes clear that the FBI never investigated the lender–as opposed to the individual appraiser–never investigated the lender when it found these fraudulent appraisals. They just assumed that if you are a banker, you couldn’t be a crook. And that, of course, runs contrary to everything we know as effective regulators, everything we know as white-collar criminologists, everything we know as sentient adults, and everything we know from the history of banking.

So this is the crisis that could have easily been stopped if people had simply paid attention to the appraisers. And by people, I mean the public sector actors that I talked about, but, of course, all of the private sector actors as well. If the credit rating agencies had said, hmm, maybe we should give AAA ratings to loans that we know are pervasively fraudulent, then you wouldn’t have had this crisis as well. If the investment banks had said, you know, maybe we shouldn’t buy loans that are pervasively fraudulent and then turn around and repackage them as derivatives, then there would have been no crisis. Again, this is one of the most easily avoidable crises that we have ever suffered, and it is the largest financial crisis that we suffered in 75 years.

NOOR: And, Bill, I want to end with another question. What does this tell us about the historical record, that people can still get on the radio today and still claim that this was a black swan event and that there was no way to avoid it happening?