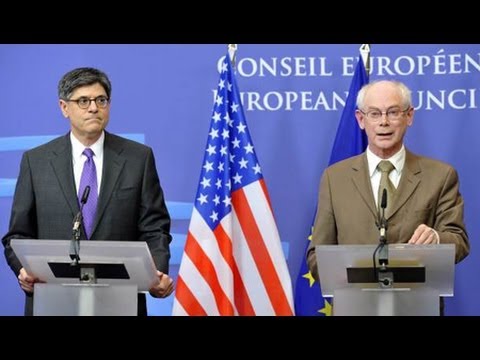 PAUL JAY, SENIOR EDITOR, TRNN: Welcome to The Real News Network. I’m Paul Jay. And welcome to an edition of The Black Financial and Fraud Report with Bill Black, who now joins us.

Bill is an associate professor of economics and law at the University of Missouri-Kansas City, a white-collar criminologist, and a former financial regulator, author of the book The Best Way to Rob a Bank Is to Own One.

JAY: So President Obama delivered his budget. What’s your take?

BLACK: Oh. Well, to really appreciate the full insanity, you have to go back one day to Tuesday, April 9, where President Obama–the same president, you might note–sent our Treasury secretary, the intrepid Jacob Lew, to Europe. And his mission was to convince the Europeans, stop doing this insane austerity, because you’re throwing Europe back into not simply a recession but Great Depression levels of unemployment.

So good thing to do, right, because austerity in Europe has in fact been insane.

And so the finance minister of Germany, one Wolfgang Schauble, famously said to Jacob Lew, no one in Europe believes that austerity has any problem in terms of reducing growth. Now, of course, he didn’t use the word austerity, because austerity is a word that causes tens of millions of Europeans to go into the streets and protest. So they have a euphemism for this.

Anyway, Jacob Lew’s unconvincing on European leadership, no surprise. But part of the reason Jacob Lew is of course a terrible spokesperson against austerity is he’s one of the leading proponents of austerity. And I have a column explaining how when he was head of OMB under Obama, he produced all of this insane explanation for proposed budget that was going to inflict austerity on the United States, saying austerity was great for growth–in other words, the same insanity of Wolfgang Schauble. And Jacob Lew was also one of the leading people in the Obama administration pushing for the grand betrayal, which, in addition to being obscene on multiple levels, is an act of austerity as well. So they want to cut Social Security and Medicare and Medicaid and all kinds of social programs and increase taxes, and all of this while they’re simultaneously telling the Europeans, don’t do this; it’s producing a disaster.

JAY: Well, wouldn’t President Obama argue that the cuts to Social Security are further out? And in the shorter term he is increasing spending some. They have–you know, they’re adding program–he wants to have this national kindergarten program available to all. There is a program, $260 million in funding for science and technology, $100 million in funding for something called Promised Neighborhoods, $850 million for Race to the Top. I mean, there is some spending going on. So, I mean, isn’t that–.

That’s not how economies work. Those may be good programs, but you still have this small little thing called a recession, where you have inadequate demand, and if you adopt austerity in it, just as he went and sent Jacob Lew to warn the Europeans, you produce a disaster.

And so what you’re talking about–all of those programs, right, they all added up to a few billion dollars in the context of where we’re producing much greater overall austerity, so they’re going to be swamped by the austerity. And all of these things net produce a dramatically weakened recovery. And you’ve seen it in the job numbers, where essentially the entire reduction in unemployment can be explained by people leaving the workforce because they’re so discouraged.