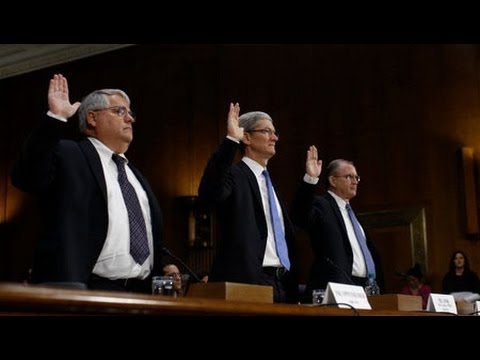 PAUL JAY, SENIOR EDITOR, TRNN: Welcome to The Real News Network. I’m Paul Jay in Baltimore. And welcome to this week’s edition of The Black Financial and Fraud Report with Bill Black, who now joins us from Kansas City, Missouri.

Bill is an associate professor of economics and law at the University of Missouri-Kansas City. And he’s the author of the book The Best Way to Rob a Bank Is to Own One.

JAY: So I guess you’ve been following the Apple tax cases or issue.

BLACK: Yeah. So Senator Levin continues to do virtually the only real investigation being done in the United States of the elite entities. And he has summarized this as Apple achieving the holy grail of tax evasion, which is that Apple has succeeded in creating the stateless corporation that makes literally tens of billions of dollars and pays taxes to absolutely no one. And at the hearing that was just conducted, it turned into a love fest for Apple instead of a crackdown on this behavior, with even Levin holding up his iPhone and giving them a free advertisement about what a great product it was and how he loved them. And then Ron Paul attacked the Senate for how dare you criticize Apple for evading taxes.

JAY: Right. And so what was it that Apple said that won them over? I mean, why bother to have them come testify if it’s going to turn into this love fest?

BLACK: Well, what they said was it’s all your fault and we had nothing to do with it. And, of course, that’s completely untrue, because it is the corporate lobbyists that have created this tax. And so they ended up with this really wonderful example of chutzpah, which is if you get criticized for paying virtually no taxes, your proposal is: let’s reduce U.S. tax rates so that they’re virtually nonexistent. And this is called repatriation, when you bring these profits home.

Now, these profits are really home, but they’re not home in the United States in a taxable fashion. So they would bring them home in a taxable fashion, but only if, they said, the tax rate for this kind of corporate income tax was reduced to single digits. And we did this before at the behest of the largest U.S. corporations, and there was a study done, and it found that when they brought these sums back for taxable purposes under a special repatriation legislation, 92 percent of the money went to corporate buy-backs of stock. Now, that’s designed to increase the stock value so that it will increase the value of the senior officers’ bonuses that are largely paid in stocks and to dividends and to direct executive compensation. And the same study found that there was no increase in jobs from all of this.

So it’s a really wonderfully illustrative thing that even at its best–and Senator Levin is the best and will be retiring, so it’s going to get much worse in the coming years–even at their best, they still are unwilling to take on industry. And industry is so completely divorced from any concept of shame that when they’re criticized, they push for even lower tax rates and even greater evasion. So it was a real tour de force, and the testimony of Apple’s CEO is being praised in all kinds of business publications as an illustration of how you should do it.

JAY: So the point here is that we will either park our money in Ireland and pay no tax or we’ll bring it home if you give us what amounts to almost no tax.

BLACK: Right, except that the money isn’t actually in Ireland. This is all a fiction. There’s a good report in The New York Times that the money is overwhelmingly in U.S. and European banks. And mostly the Apple money, in fact overwhelmingly the Apple money is in the United States. So it’s just a matter of–and Apple can use it and does use it, but they don’t have to pay taxes, because, you know–and Leona Helmsley got it right years ago. You know, taxes, that’s just something for little people. It’s not for the most powerful corporations in the world. And there’s a new study out as well in Europe that says that Europe has about half of the money in tax havens in the world and that that amount of money is roughly USD 12 trillion. Now, that’s three-quarters or more of the U.S. GDP.

BLACK: And not just taxes. These are people who are also taking their gains from other crimes, including murder in the case of a number of the drug cartels, and then laundering the money and having it safe in these European havens. And, of course, the rest of the world is about as large. And let’s not forget the United States is a significant portion of that. We don’t like to think of it, but places like Miami and Delaware act very much like tax havens.

JAY: Go back to the Apple case. How do they get the money into their U.S. bank accounts and then don’t have to pay tax on it? And how do they call it–claim that it’s in Ireland if it’s sitting here?

BLACK: Okay. So here the series of things. First, Ireland deliberately became a tax haven as a strategy about 20-plus years ago when it reduced its corporate tax rate to half the regular corporate tax rate in Europe. So that’s the beginning of the story. And a lot of U.S. corporations in particular go to Ireland.

Now, the second part of the story is a key scam which is not being treated as unlawful, even though it should be treated as unlawful and people should be punished for felonies for doing it. And this goes by the arcane name of transfer pricing. And what transfer pricing means is I jiggle the accounting to make it appear that the vast bulk of the earnings occurred in the nation with the lowest tax rate, which of course is back to Ireland. Now, this is easier in the context of high-tech companies, because the earnings, of course, you know, not that much of the cost is attributable to the glass and the electronics; it’s mostly the marketing and the technology, the intellectual property. And so you assign virtually all the profits to the intellectual property component.

JAY: And then you assign the rights to the intellectual property to your shell in Ireland.

BLACK: That’s correct. You create a shell, except that the shell isn’t really in Ireland, necessarily. It’s of course actually run out of the United States. But to the Irish, they’re told that that is a U.S. entity, and the Irish corporate tax is not assessed on earnings of U.S. entities that are not located in Ireland.

And so, to back it all up, Apple to begin with had these immensely valuable intellectual property rights that it could have sold for hundreds of billions of dollars, and it simply assigned these rights to the shell company for nothing. Now, you’re not supposed to be able to do that in normal corporate life. That would be considered a sham transaction. And it’s really only in the tax context where governments are so weak that they allow this kind of sham transaction that has no economic substance to be treated as if it were real. So that’s the recipe altogether.

And then there’s a factual controversy. The Senate, on the basis of an interview of a former Apple guy who was heavily involved in the taxes, says in its report that Ireland cut a special deal with Apple, or at least structured its tax law to be specially beneficial to Apple. And the Irish government has denied this vehemently, saying that we make zero special deals on taxation.

And, of course, all of this allowed Apple’s CEO to come in front of Congress and say, we don’t do no stinking tax gimmicks, whereupon the expert witness types, university professors, said that they virtually fell of the seat. It’s again the chutzpah of claiming something that is entirely a tax scam and a gimmick is an entity that does none of those gimmicks.

And then I leave you with The Wall Street Journal, which of course is priceless. First it criticizes the Senate: how dare you attack Apple. And then it says, now, what we should be doing is reducing the corporate tax rate to zero. And then–this is in the same two sentences. And then the Treasury, it says, of the United States could sit back and get wealthy on all the additional revenues it would get with a zero tax rate.

JAY: And, excuse me, where is the line between those two dots? Where is the revenue supposed to come from?

BLACK: Well, I don’t know. If you charge zero times a big enough number, I always thought it was still zero. [crosstalk]

JAY: Well, maybe they would argue that you’d wind up being able to tax the executives, whose compensation would be even higher as a result of all this.

BLACK: Oh, no. They would shelter that as well.

But no, I mean, there is no–you’re looking for reasoning, and I told you it was the Wall Street Journal editorial [inaud.]

Irish Left Set to Win General Election, But Still Shut Out of Governing?