U.S. banks say the 2001 Patriot Act prevents them from doing business with banks in Uruguay that provide services for newly legalized pot sales. The politics in all of it is 'rank hypocrisy,' says economist Bill Black

U.S. banks say the 2001 Patriot Act prevents them from doing business with banks in Uruguay that provide services for newly legalized pot sales. The politics in all of it is 'rank hypocrisy,' says economist Bill Black 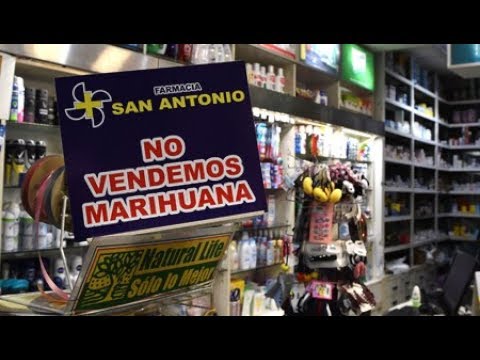 Sharmini Peries: It’s The Real News Network. I’m Sharmini Peries coming to you from Baltimore. Last month, Uruguay became the first country in the world to legalize marijuana for recreational use. Many in Latin America welcomed the move, arguing that it would drive many drug traffickers out of business and reduce crime. Former president Pepe Mujica is often quoted as saying, “Worse than drug addiction is drug trafficking.”

However, this month Uruguayan pharmacies, which are allowed to sell marijuana in limited amounts, discovered that U.S. banking system is more powerful than the Uruguay’s legislature. As reported by the New York Times, the Patriot Act prohibits financial institutions from engaging in businesses that profit from controlled substances such as marijuana. The purpose was to prohibit money laundering and drug trafficking. However, now Uruguayan pharmacies are thinking of not participating in the legalized use of marijuana because of the U.S. Patriot Act.

Joining us now to discuss this is Bill Black. Bill is a white-collar criminologist, associate professor of economics and law at the University of Missouri-Kansas City. He’s the author of The Best Way to Rob a Bank Is to Own One. Thanks for joining us, Bill.

Sharmini Peries: Bill, how is it that marijuana-selling pharmacies in Uruguay could be affected by the 2001 Patriot Act of the U.S.?

Bill Black: Well, patriotism is the last refuge of the scoundrel, as we famously know, and it was the first refuge after 9/11. It’s a typical overreaction to a crisis in which they, they being Congress, simply assumed that if you were involved with a drug that money laundering and illegality must be present. But of course if you legalize it, that wouldn’t be true. Obviously, the same thing would have been true for alcohol during prohibition.

Uruguay, to its credit, and I’m now wearing my criminology hat, my econ hat, and my law hat, all these hats, say these are really stupid laws against marijuana. Uruguay is the global leader in actually legalizing at the national level. Canada may well follow. But of course, various states in the United States have followed since the passage of the Patriot Act.

None of these sales implicate the concerns that led to the legislation. None of them involve money laundering. None of them involve funding terrorism and such, so it doesn’t make any sense. Now, to their credit, the banking regulators and prosecutors in the United States, in the context of states like Colorado that have taken steps in legalization, have indicated that they’re not going to prosecute banks because they provide loans, or deposit accounts, or checking accounts to legal businesses that, under Colorado law, are lawfully selling marijuana, for example.

Sharmini Peries: Could the banks not do the same when it comes to Uruguayan pharmacies? That’s one question. Then the second question is doesn’t Uruguay have their own banks? Can the pharmacies not just deal with their own banks in the country?

Bill Black: Let me take the second question first. Yes, they could. The problem is that Uruguayan banks deal with the United States banks. The U.S. banks can’t deal with them under the Patriot Act unless they get, back to your first question, an exception similar to what we’re providing for banks’ transactions in states like Colorado.

Now, that makes perfect sense, but a lot of these exceptions were, of course, made under the Obama Administration. The Trump Administration has an outright predilection: “If Obama was for it, no matter how sensible it might be, we’re against it.” We know that Attorney General Sessions has said that he … It completely demonizes marijuana despite all the scientific evidence, despite the fact that it does substantially less harm than alcohol. He presumably would oppose it.

Now, simultaneously, by the way, this is not the only way we use our banking system to restrict what typically are real abuses. Money laundering really is an abuse. Funding terror really is an abuse. We had a broader program, Operation Choke Point, that used the banks and said, “You’ve got to stop funding these really awful enterprises that are harming the world.”

Well, guess what. The Trump Administration and conservative Republicans are introducing legislation to forbid that at the same time they’re taking the opposite tack with Uruguay and would like to take an opposite tack with places like the state of Colorado as well. The politics in all of this is: A) rank hypocrisy; and B) maybe very bad for Uruguay. That might be a signal of what they will potentially do to states like Colorado. Although, I must say it’s likely to be very unpopular even with Trump’s base if he takes those actions against states like Colorado.

Sharmini Peries: Right. What is a Latin American country to do? As you know, many Latin American countries want to take this path and legalize recreational marijuana. They actually feel that this is a solution to the problems that they have in the country in terms of drug trafficking. Also, recently at Mercosur, and some of the other trade bodies in Latin America, they all want to move ahead with this, but the U.S. is the one stopping them from being able to do this. What can they do?

Bill Black: Well, they could, of course, quote Trump back to Trump. On the campaign trail, Trump said that legalization at the U.S. level should be left to the states, and that if they wanted to legalize marijuana the way Colorado had done, that was fine with him. Latin American should be quoting Trump back to Trump and indicating this is something that’s going to produce better relationships. Indeed the pressure, of course, on Trump and trade at that juncture becomes, “Hey, we should be facilitating the ability of Colorado to export to other foreign nations, grass as well. That would be good for our balance of trade.” See if that works on Trump.

Sharmini Peries: Just how dependent is the global banking system on U.S. bank and, thereby, U.S. setting the rules in terms of governing other countries and their laws?

Bill Black: Almost completely. By the way, this does show up again in real money laundering and real sanctions that really relate to terror, which obviously none of this does in the context of Uruguay. Standard Chartered, for example, a very large British bank, very active in the Middle East, and Asia, and Africa, famously the U.S. compliance guy warned his more senior counterpart in London that what Standard Chartered was doing was very dangerous under U.S. sanction laws, likely to be illegal and get the bank into serious trouble. This was actual financing of terrorism. The famous reply, which we can’t say in full, from the UK, “Who the (silence) do you Americans think you are telling us how to run our banks?”

This is, in fact, a pretty broad pattern. New York is so dominant in commercial banking that even if you were a Uruguayan bank, you’re going to have to move money through New York, and through the Federal Reserve system, and the SWIFT system, and that means that we do have unusual leverage as the United States. Historically, we’ve wanted to use that leverage. Again, if you’re doing that for sensible reasons, it’s probably good for the world. This is obviously a stupid reason. As we’ve admitted in the context of states like Colorado, it makes no sense in terms of the purposes of the Patriot Act to be going after Uruguay in these circumstances. None at all.

Sharmini Peries: All right. Then there are other countries that have become victims of this kind of U.S. dominance in the banking industry, countries like Iran, and Russia, and recently Venezuela, who’ve all been subject to some sort of sanctions under the U.S. and banking; in Iran’s case, where they’ve actually seized some of their assets. Are there any ideas or efforts to get around this kind of dominance?

Bill Black: Sure. Certainly China, for example, and Russia, one of the things that they suggest is, “If your banks come here, we’re not going to have any messy requirements that get in the way of good, old money laundering or financing terror.”

Yeah, I mean all across the world tax havens exist to evade U.S. restrictions. By the way, they, too, are vulnerable and the fact that we have never cracked down as fully on the tax havens, using the economic leverage and financial leverage we’ve just been discussing, tells you that, in particular, the Bush Administration did not want to crack down. It viewed tax evasion as a good thing that acted to create a powerful incentive to reduce corporate taxes everywhere.

As you know, President Trump has said his next big initiative is what he called “tax reform.” Obviously, reform is the most abused word in Washington, but they want very heavily reductions in corporate income tax. Therefore they are not, in truth, hostile to tax evasion through these offshore centers. By the way, not just offshore, but Delaware.

Sharmini Peries: Very, very interesting, and very close by. I thank you so much for joining us today, Bill.