Bill Black, former financial regulator says banning Muslims is unconstitutional, we can not discriminate based on religion in this country

Bill Black, former financial regulator says banning Muslims is unconstitutional, we can not discriminate based on religion in this country 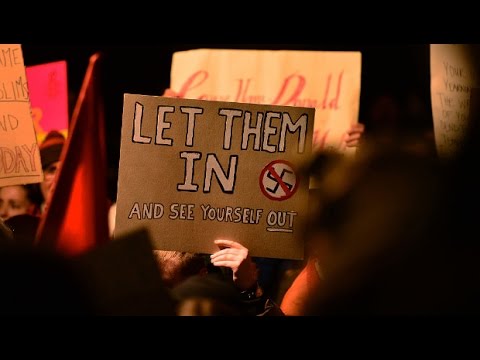 Two travel bans up, two travel bans down. The Trump administration is in regroup mode yet again, after a federal judge late last month struck down the President’s Executive Order restricting travel to the U.S., from citizens of mostly Muslim majority countries. In fact, Trump himself disparaged the 9th circuit court again, in a series of tweets on Wednesday morning. And his Attorney General, Jeff Sessions, even took the time to disparage the State of Hawaii, because of this judge’s ruling.

Joining us today to discuss this is Bill Black. Bill is an Associate Professor of Economics and Law at the University of Missouri at Kansas City. He’s a white-collar criminologist, and a former financial regulator. Also author of the book titled, “The Best Way to Rob a Bank is to Own One”. And he is a regular contributor here on The Real news.

So, Bill Black, before we come to you, I wanted to play the comments A.G. Sessions made on the Mark Levine Show, where he disparaged the State of Hawaii, much to the chagrin of natives there. Let’s take a listen.

JEFF SESSIONS: I really am amazed that a judge sitting on an island in the Pacific, can issue an order that stops the President of the United States from, what appears to be, clearly his statutory and constitutional power.

KIM BROWN: So, Bill Black, Jeff Sessions claims that he was only making a joke. That he knows that Hawaii has been a state since the 1950s, but his comments still not sitting well, not only from Hawaiians but most of the people at large who still take quite an issue with Donald Trump’s very targeted Executive Order, banning certain Muslims from travelling to the United States. What are your thoughts?

BILL BLACK: Well, it wasn’t a joke, it was an insult. And it was a stupid insult that reflected Sessions’ entire life, which is one of immense bigotry. And he got caught at it, and it’s just one of the reasons that it’s preposterous that he would be the Attorney General of the United States of America. So, the Trump loss on the Muslim travel ban is another self-inflicted wound, in which the primary evidence used to strike it down, was delivered repeatedly by then candidate Donald Trump, followed by President Donald Trump.

Followed by his chief security advisor, not on the payroll, Giuliani, who said, “Hey, I told the President that what he was going to do was unconstitutional. So, he said, “Well take out whatever words we need to take out, so it’s constitutional.” So, this is just treating the constitution as a game. That if I take out the magic words that reveal what I really intend too clearly, I can do anything that for purely unconstitutional purposes.

So, the primary thing that the district court judges, not just in Hawaii, but also in Maryland cited, were the words of Donald Trump, in which he said, “Yes it’s Muslims. The problem is Muslims. I’m going after Muslims,” right? And as even the district court judge in Eastern District of Virginia, was ruled in favor of Trump’s second travel ban, said, the judge that ruled in Trump’s favor said his logic, he says, “Well, I’m no longer faced with a facially unconstitutional Executive Order.” Right?

So, the first executive order was on its face, discriminatory. Now they’ve created a false face. And yes, I know they continued to say things that make clear their unconstitutional intent. But I’m going to say that it’s now sufficiently remote, that we can ignore it. And the other judges said, no.

KIM BROWN: Well, Bill Black, explain that. So, I have a couple of questions for you. First, what is the difference in the language between Trump’s first executive order that was challenged, and subsequently defeated in the courts, and the second executive order, which he has resubmitted, hoping that it passes the constitutional muster? What changes did he actually make?

BILL BLACK: Okay, so people will recall, the United States has this thing called the First Amendment. And it says we don’t discriminate on the basis of religion. And we don’t have established religion. So, Trump makes it absolutely clear that it was against Muslims. That’s facially unconstitutional. Right?

But on top of that, the first executive order had this special provision for Christians. So, we had this bad stuff from these nations, which just happen to be overwhelmingly Muslim nations, and we had a special carve out for Christians. And you know, as I said, even the supporter, the judge in the Eastern District of Virginia who eventually rules in favor of Trump says, “That was facially discriminatory.” Right?

So, that should kill it anyway. But on top of that, you have Trump saying, yes, that’s exactly what I intend. The problem is Muslims, right? So, that’s unconstitutional. And as I said, the other two judges say, when it comes to the second travel ban, where they’ve gotten rid of the Christianity stuff, and they say, well look, we still have a president who’s made it clear he intends this to be a Muslim ban. And he has carved it out so that it is only nations that are overwhelmingly Muslim.

And so, it’s still unconstitutional, whereas the Eastern District of Virginia judge, they said, says well, now those statements are somehow remote.

KIM BROWN: Well, Bill, so in Donald Trump’s series of tweets — his, some reason daily morning tweets, that he bestows on the rest of us around 6:30 every day — he goes on to talk about how he disparages the 9th circuit. And he says that he’s going to see us… see you in Supreme Court.

What’s the likelihood that this could actually reach the highest court? And how many bites of the apple is Donald Trump going to take, at trying to pass this travel ban?

BILL BLACK: Well, the people have to remember that what we have at this juncture, we had it go up to the 9th circuit on the first travel ban. And the 9th circuit says this is unconstitutional, and ruled against it. Now there’s a nasty split on the 9th circuit, where conservatives are doing remarkable, you know, sort of name calling of other members who form the majority of the 9th circuit.

And Trump, as you will recall, said the equivalent of, see you in the Supreme Court. And then it becomes apparent again that they had done horrible lawyering. So, when you go to the Giuliani’s of the world, you don’t get good product. And when you got to the Sessions of the world you don’t get good legal product. So, they scrapped the appeal. They said, if we go up on this record, we’ll probably lose. Let’s re-do it.

They’ve lost again, but it’s a harder case at this time, and these are only district court opinions. So, the administration can appeal this. It has this ability in a much more conservative 4th circuit, where the odds are better that they would get a decision to their benefit. And now there’s a Supreme Court with a majority of conservatives. So, you know, this travel ban on Muslims may yet become law, and it could become law fairly quickly.

It doesn’t seem at this juncture that the Trump administration is eagerly seeking to expedite these cases because, you know, the word out of the White House is that they’re in backbiting, as to who screwed up within the administration. And, of course, the answer is the President, and the Attorney General, and that’s not an acceptable answer.

KIM BROWN: Indeed. Well, we have been speaking today with Bill Black. He’s an Associate Professor of Economics and Law at the University of Missouri at Kansas City, talking about the reaction from Attorney General Jeff Sessions, and the Trump administration at large, about their travel ban.

The Executive Order Donald Trump signed, aimed at keeping Muslims from coming to the United States. However, that has been rebuked somewhat, again, by a federal court. We will see how this case ends up playing out.

Bill Black, as usual, we appreciate you joining us today. Thank you.

KIM BROWN: And thank you for watching and supporting The Real News Network.

How Trump and Netanyahu Undermine Freedom of Speech