The Savings and Loan Crisis Demonstrates the Importance of Glass-Steagall

Bill Black: When remembering recently passed away Charles Keating,a key architect of the S&L Crisis, we are reminded of the importance of the Glass- Steagall Act of 1933

Bill Black: When remembering recently passed away Charles Keating,a key architect of the S&L Crisis, we are reminded of the importance of the Glass- Steagall Act of 1933 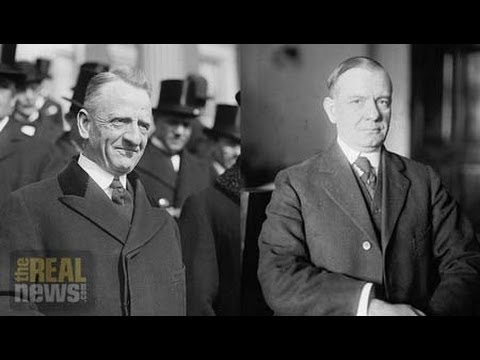 We’re now joined by Bill Black. He’s an associate professor of economics and law at the University of Missouri-Kansas City. He’s a white-collar criminologist, former financial regulator, author of the book The Best Way to Rob a Bank Is to Own One. And he’s a regular contributor to The Real News.

Thanks so much for joining again, Bill.

BLACK: Well, I did a column recently, prompted, of course, by the death of Charles Keating, who was the most infamous frauds, running Lincolns Savings and Loan, in which I talked about the ten lessons we should learn. And then I thought about it some–or realized I’d left out one of the really important lessons, and that was the importance of Glass-Steagall.

So Glass-Steagall is a law that we passed in the Great Depression in 1933, in conjunction with creating federal deposit insurance, that said, look, we’re giving this federal subsidy to the banking operations. It doesn’t make any sense to create unfair competition, where the bank could own a bakery store, for example, and compete against another bakery that didn’t have that federal subsidy, plus those kinds of investments are riskier. And there’s a built-in conflict of interest. If you’re lending to accompany and it gets and trouble, you may be tempted to buy stock in that company to try and keep it from failing and vice versa. And for all these reasons, they separated commerce and banking and said investment banks can own equity interest–in other words, they could own stock or they could own entirely a piece of property or a spa or anything they want–but they don’t get federal deposit insurance. Commercial banks can’t do those things. And that worked brilliantly for 50-plus years.

But one of the proofs of that was the savings and loan debacle, because savings and loans were not subject to the same Glass-Steagall limitations. They could do whatever their status said they could do. And California famously said, you can do as many direct investments as you want. And the direct investment was where you’d have that ownership interest. So you could own real estate, you could own, you know, Wendy’s franchises, you could own windmill farms and anything that you wanted. And that ended disastrously. And one of the leading practitioners of that was Charles Keating. And it ended badly, and proving all of the reasons why Congress was smart enough to pass Glass-Steagall in the first place.

So when Lincoln’s direct investments get into trouble, that’s what they did is they made massive loans not to the troubled property, but to supposed buyers for those property. And, of course, those buyers were just straw men. They weren’t real. But they got real money, and that caused losses to grow massively at Lincoln Savings. But because they supposedly purchased these properties for way above the value on the books, they magically, like an alchemist, transformed base metals into gold, or this case they transformed real losses into supposed massive gains. And those massive gains slowed the takeover of Lincoln Savings, allowing it to become the most expensive failure. But they also helped Charles Keating loot Lincoln Savings. And they were used to try to discredit the regulators of, you know, look, you can criticize these assets, but they turned out to be great.

And even as early as 1986, some members of Congress had figured out this was a bad thing and were trying to, in essence, use Glass-Steagall-like prohibitions on savings and loans. And Keating at that point got Senator Cranston, one of the Keating Five, to secretly put a hold on that legislation and keep it from coming up for any kind of a vote. Well, after the disaster of Lincoln Savings, Congress changed its mind and passed rules that pretty much apply Glass-Steagall to savings and loans. They did it in a convoluted way, but that was essentially the effect. And that again worked very well in savings and loans right up until Congress and the Clinton administration, at the behest of the banks, agreed to get rid of the effective parts of Glass-Steagall. And this was one of the things–not the biggest, but one of the things that contributed to the disaster.