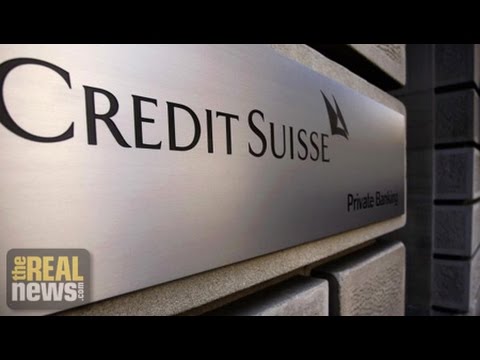 PAUL JAY, SENIOR EDITOR, TRNN: Welcome back to The Real News Network. I’m Paul Jay, and welcome to the Bill Black Report. Bill now joins us from Minneapolis. Bill is an associate professor of economics at the University of Missouri-Kansas City, and the author of The Best Way to Rob a Bank is to Own One. Thanks for joining us again, Bill.

JAY: So two guys that were former bankers for Credit Suisse were told today that they’re not going to go to jail. This comes out of the big scandal that Credit Suisse helped American taxpayers avoid billions of dollars in taxes. The two guys were told–one pays $100,000 fine, another $125,000, five years parole, and the headlines suggest this is, bankers get away with something. What do you think of it all?

JAY: So there were eight people indicted. These two guys made a deal. Six are not going to be showing up in an American court any time soon, it’s expected. There is no extradition treaty between the United States and Switzerland. What do you make of that, in the sense that even in the $2.6 billion fine Credit Suisse paid, none of the executives paid a penny, none of them were charged with anything. The cost of the fine just got sent through to the Credit Suisse shareholders.

BLACK: Yeah, and not even that, since it’s generally tax-deductible in Switzerland, so it really got sent on to the Swiss citizens, in part. It’s business as usual under Attorney General Eric Holder. They have virtually never gone after the individuals as part of the settlement process with, when they’re suing the banks. And of course, they never have a real prosecution against the banks.

In this case, when it was announced in 2014, the settlement with Credit Suisse, Eric Holder actually bragged that he had coordinated–was the phrase he used–with the Securities Exchange Commission, the SEC, and with the New York financial regulators to ensure that there would be no significant economic consequences to Credit Suisse of having confessed to being a felon. And by the way, the press release said, from the Justice Department, that these criminal techniques by Credit Suisse had lasted for more than a century, and that Credit Suisse not only had not cooperated with the U.S. investigation, but it actually destroyed documents, hidden files, tried to encourage employees to perjure themselves, and such.

JAY: The amount of money that’s involved here in terms of tax evasion, they say, is in the billions. You would think if Congress was at all interested in really collecting this kind of money, wouldn’t you pass a law saying you can’t shove your money in banks in countries where there’s no extradition treaties? It’s kind of asking for this to happen.

BLACK: Yes. Now, in mild defense of Congress, the only reason this case went forward at all was because of Congressional investigation by now-former Senator Carl Levin. But yes, the United States could crack down in many different ways on these tax havens, and it was about to do so in cooperation with a bunch of European nations in what’s called the Organization for Economic Cooperation and Development, the OECD. And then President Bush got elected, and one of the first things his transition team did, even before Bush became president, was to signal that the United States would become the leading opponent of the effort to crack down on the tax havens.

So there’s a split between the parties, and I’m sure you’ve noted that the Republicans control the House and the Senate in the United States, so it ain’t going to happen any time soon.

JAY: Now, one of the lawyers for the two former bankers said there’s somewhat, there’s a hypocrisy that these two guys are threatened with jail and forced into this position of having to come cooperate in the prosecution of Credit Suisse, but they end up with fines and they end up on parole, but there’s an amnesty program for American taxpayers. I don’t–did any of the taxpayers, who actually should have been the ones they went after, do any of them suffer repercussions here?

BLACK: Oh yeah, they got a sweet, special deal, too. This amnesty program that you mentioned means that in general you get to avoid all, or virtually all, of the penalties that you would normally have to pay. And those penalties in their context, since many of them have been evading taxes for a good portion of their adult life, would have been far larger than the taxes due. So there was an enormous financial benefit from all of us to the absolute worst elements of society.

JAY; So what should people be demanding to reform this? What kind of laws would actually make some sense?

BLACK: Well, it’s not so much the law, as we could prosecute under the existing law the U.S. taxpayers. And we know who some of them are, and if we used our economic leverage–remember, indirectly, the United States of America is the only reason Switzerland exists anymore as a financial entity. Because its huge banks, Credit Suisse and UBS, were not only serial felons, but were deeply insolvent.

And mind you, we did it again, secretly, through AIG. When AIG paid a whole bunch of not only Goldman Sachs, but foreign banks, including a very large Swiss bank a hundred cents on the dollar when they could have paid far less on the things called the collateral default swaps.

JAY: All right, thanks very much for joining us, Bill.

BLACK: All right, let me tell you one other thing.

BLACK: The fine against Credit Suisse was so pathetic compared to their liability that when it was announced, the price of Credit Suisse stock increased.

JAY: Yeah, that says it all. Thanks very much, Bill.