How the Ecuadorian Economy Grew in a Global Recession 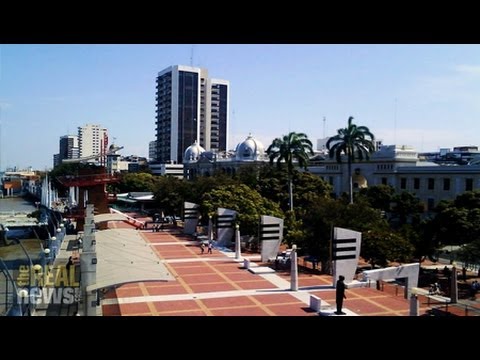 JESSICA DESVARIEUX, TRNN PRODUCER: Welcome to The Real News Network. I’m Jessica Desvarieux in Baltimore. And welcome to this edition of The Bill Black Report.

Now joining us is the man behind the report, Bill Black. Bill Black is the author of the book The Best Way to Rob a Bank Is to Own One. And he also teaches economics and law at the University of Missouri-Kansas City.

DESVARIEUX: So, Bill, I know that you recently returned from Ecuador. Can you just paint a picture for us of what the economic situation is like there down in Quito?

BLACK: Yeah, I just got back on the red-eye about two hours ago. So if I fall asleep during the interview, I hope people will understand.

I gave a talk, primarily, at one of their major universities in Quito, called FLACSO, and it was very well attended. They filled not only the assembly area but the entire overflow area, where they had to pipe in the address.

The talk I gave was about the Ecuadorian economic miracle. And the super-short version of it is that I went back to what American conservative scholars were writing just before President Correa was elected in 2006, and they were emphasizing what a disaster Ecuador was and what a disaster it was almost certainly going to continue to be, that it had no stable government, that its elites–remember, this is an American conservative writing this–that its business elites had no real attachment to democracy, that they worked with the military behind the scenes to remove, unconstitutionally, elected governments, that the debt of Ecuador was crushing, and that there–really, everything that one could predict was that it was likely to get worse, not better.

Well, flash forward. What actually happened when President Correa was elected in 2006 and begins taking office in 2007, well, it gets worse in many ways. Ecuador’s leading trading partner is the United States. We, of course, were slipping into the Great Recession. Oil prices do surge, which is very good for Ecuador because it’s a major oil producer, but then they collapse in the latter half of 2008 as well.

And then I simply went through how he did it, and pointed out that part of what he did was completely consistent with an aspect of the Washington consensus, because the Washington consensus says the quintessential appropriate thing for a government to do is spend heavily on education, health, and infrastructure, ’cause those things not only improve the quality of life; they serve as investments in human and physical capital that allow growth and produce greater stability.

So President Correa is the only president who was able to serve out his term out of something like the last eight presidents of Ecuador. He’s been reelected again.

And I ended by saying, while I’m sure that President Correa and his ruling party were not too happy about this, they’d also met the real test of democracy. And the real test of democracy is: can the opposition win? And they have, in a series of important municipal elections in Ecuador. And when they win, do they win? In other words, are they actually able to take office through a peaceful transition of power? And the answer is yes in both of those things.

So the proof is in the pudding. This economic miracle in Ecuador is made possible also by a social and political coming together of Ecuador that bodes well for the future as well, and that the folks of Ecuador should really be proud of what they’ve accomplished and look forward to the future with some idea that they could actually control their own fates to a greater extent, instead of having to depend on whatever happens in America.

DESVARIEUX: Alright. Bill Black, thank you so much for joining us.