Austerity and the Death of Logic

Bill Black: Both the GOP and the White House refuse to support a bill that ends the sequester, it shows the real intention of the Obama administration

Bill Black: Both the GOP and the White House refuse to support a bill that ends the sequester, it shows the real intention of the Obama administration 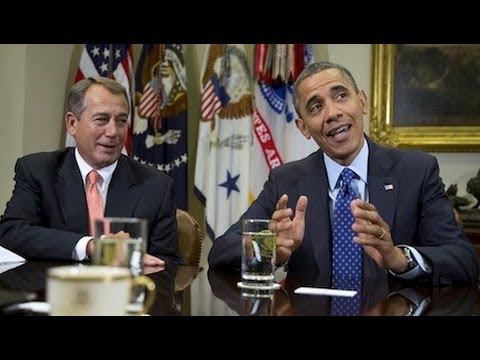 Bill Black is an associate professor of economics and law at the University of Missouriâ€“Kansas City. He’s a white-collar criminologist and former financial regulator. He is the author of The Best Way to Rob a Bank Is to Own One. And he’s a regular contributor to The Real News.

DESVARIEUX: So, Bill, what do you have for us this week?

BLACK: I have report from the absolute silly season. So this is the complete death of logic and sense by pretty much everybody involved who are the serious people in Washington, D.C., who seem determined to screw up our economy royally.

So here, to review the bidding, this is what we’ve got. We have the Republicans, and the Republicans hate everything European. Everything European is as”you know, it’s a laugh line, it’s a derisive line and such, except austerity. So they take the one policy that everybody can see has produced a disaster in Europe, thrown the Eurozone back into recession, and is potentially even going to tear the European Union apart, is going to cause government after government to fall, and they say, that’s the policy we need in the United States, we need to emulate Europe, and with no discussion that maybe that’s insane. So that’s the Republican version of insanity.

Then we have the White House version of insanity. And the White House version of insanity is: austerity badâ€”would cause the United States to go back into recession, and therefore sequester terribleâ€”not only forces us back into recession, but causes us to cut all kinds of great programs. So what do we see out of the White House? We have the Conyers bill. And Representative Conyers has this very intelligent bill. It is the most wonderful thing in Washington, D.C. It is literally one sentence. And the bill says: the sequester is repealed. Right? And they will notâ€”the administration will not support this. And this is what I’ve been talking about. This really is smoking out the true intentions of the White House. And what you’re seeing time after time, now expressly, is that the president wants to cut the safety net, wants to cut Social Security, wants to cut Medicare, wants to cut public programs. Indeed, he wants to cut public programs in comparison to raising taxes at a ratio of two to oneâ€”in other words, $2 of spending cuts for every increase of $1 in taxes.

Meanwhile, we get almost complete silence about the real crisis in America, which is an employment crisis, where we have well over 10 million people who want to work full time, who are able to work full time, but we don’t provide them with any work.

DESVARIEUX: Bill, so how is this playing out in mainstream media? Specifically, MSNBC, some people call it, you know, the right hand of the White House. How are they playing this whole sequestration?

So it is the silly season everywhere you look. And Dean Baker has a spectacular column that people should read that basically says this is because the president simply will not tell the truth to the American people. The truth to the American people is, if anything, the deficit is too small. We’ve been doing one measure of austerity after another since mid 2011. And you can see what’s happened to the recovery in jobs. It has strangled the recovery. It’s time to stop shooting ourself in the foot and above. But right now that’s not where we’re headed.

So, you know, I will channel my mother’s side of the family, the Irish side, and, you know, wish everyone an early St. Patrick’s Day. It is, again, the most important holiday of the year.