Bill Black: Jacob Lew confirmation hearing for Secretary of the Treasuery shows he was picked as a signal that the Geithner policies would survive Geithner, and that they're actually the president's policies

Bill Black: Jacob Lew confirmation hearing for Secretary of the Treasuery shows he was picked as a signal that the Geithner policies would survive Geithner, and that they're actually the president's policies 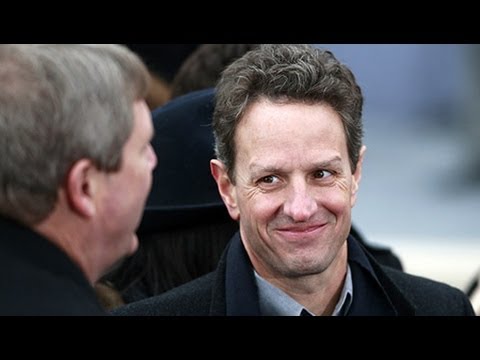 PAUL JAY, SENIOR EDITOR, TRNN: Welcome to The Real News Network. I’m Paul Jay in Baltimore. And welcome to this week’s edition of The Black Financial and Fraud Report with Bill Black, who now joins us from Kansas City, Missouri, where he’s an associate professor of economics and law at the University of Missouriâ€“Kansas City. He’s a white-collar criminologist, a former financial regulator, and author of the book The Best Way to Rob a Bank Is to Own One.

JAY: So what are you working on?

BLACK: So we have the symbol of things are going to stay exactly the same after Tim Geithner leaves. His nominee as Treasury secretary, Jacob Lew, to replace Timothy Geithner had his confirmation hearings begin, and it was overall, for the modern era of hyperpartisanship, a pretty friendly affair. The most difficult questions were about his salary.

Lew used the revolving door to become wealthy. He went and worked for Citicorp. Now, Lew is trained as a lawyer, and he was functioning supposedly in a business role, and his unit lost millions and millions of dollars. And as a result, they took his base salary, which he couldn’t quite remember but thought was probably in the $250,000 to $300,000 range, and gave him roughly a $1Â million bonus for screwing up. And so that is the modern world of finance.

And they then threw him back into the public sector, where he has functioned as the head of OMB and then the president’s chief of staff. And he was one of the guys trying to lead the great betrayal that we’ve talked about, which is, you know, beginning to unravel Social Security, Medicare, and Medicaid.

So nobodyâ€”again, the State of the Union didn’t mention even the concept of holding the bankers accountable, and nothing in the hearing, confirmation hearing, suggested any such interest on the part of any Republican or Democrat either.

So, as I said, Lew was picked as a signal that the Geithner policies would survive Geithner, that they would continue, that they’re actually the president’s policies. And they are what we used to describe as, you know, moderate Republicans, anti-regulation and such.

Indeed, the president in the State of the Union actually blamed regulators for part of the slowness to recover from the recession, saying that they were putting too many requirements on making loans. And so only a couple of years after loosening these requirements produced disaster, we’ve already forgotten those lessons.

JAY: The State of the Union speech, it kind of gave a suggestion that there needed to be some kind of stimulus, for example rebuilding roads and bridges and this and that, and thus hire lots of people. But there’s no suggestion where that money’s supposed to come from, except that it’s a private-public partnership. So I don’t know. Does that mean this will be privately financed, and then they retake it because they charge tolls on these bridges? I mean, did anything come out of theseâ€”at least, the confirmation hearing that suggests how they’re planning to do any of this?

BLACK: No, no. It remains a nonplan, and it’s incoherent.

So, of course, you never hear the word stimulus ever from the administration. They act like it’s a dirty word and they act like it failed instead of being quite successful for the limited amount of stimulus they tried.

They’ve of course been moving towards austerity with the tax increases, in particular the withholding on the payroll tax. And, you know, the economy has slowed since then, and all of his talk was in terms of the macroeconomics to slow it further.

We talked about, you know, no new net spending. So, presumably, these are programs, as you say, a public-private partnership, in which there’s a public subsidy, but the private entity ends up getting an equity stream, profit stream out of it and maybe even owns the asset. That’s very bad public policy and completely unnecessary.

When you still have a relatively weak recovery from a recession, this is precisely when you should be making the public programs and hiring the people and stimulating the economy and improving the infrastructure, which, by the way is exactly what other countriesâ€”I just did a long, long piece on Ecuador, but that’s exactly what they’ve done there, and it helped them get out of their recession within three months, which is a remarkable performance, plus, of course, their infrastructure needs are obviously even more desperate than the United States’. So it’s the classic win-win. Obama sometimes says he’s for it, but never really makes a push for it, because it’s like he always has to apologize for any public role.

JAY: So in confirmation hearings, no surprisesâ€”more of the last four years, in spite of the rhetoric we heard during the State of the Union and the inauguration.