Bill Black: A rise in inflation in emerging markets like Argentina is causing a state of panic over the future health of the global economy

Bill Black: A rise in inflation in emerging markets like Argentina is causing a state of panic over the future health of the global economy 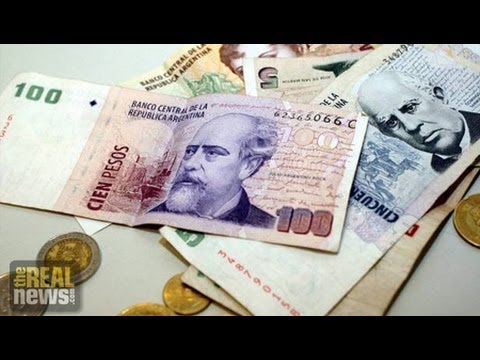 Developing countries like India, China, Brazil, also known as emerging-market economies, have been darlings of global investors for the past few years. But in recent weeks, many emerging market economies, such as South Africa, Turkey, and Argentina, are experiencing sharp declines in their currencies, raising concerns about another global financial crisis.

Now joining us to delve into the details of all of this is Bill Black. He’s associate professor of economics and law at the University of Missouri-Kansas City. He’s also a white-collar criminologist and a former financial regulator. And he’s, of course, a regular contributor to The Real News.

DESVARIEUX: So, Bill, what is happening in these emerging-market economies?

BLACK: Well, the consistent thing is inflation. And so in Turkey and South Africa you have moderate inflation that’s rising, and in Argentina you have the fact that the government of Argentina has basically decided it will be the only one that gets to talk about how much inflation there is, and it’s decided that there’s hardly any inflation, except that everybody in the country knows there’s a whole lot of inflation. So when you lie about it, that makes people even more panicked.

DESVARIEUX: Okay. But can you connect this back to the United States? What role does the Fed play in creating these financial bubbles?

BLACK: Well, it’s not clear that any of these are actually bubbles. The bubbles appear to be in China far more than the three countries that we’ve been talking about. And the United States probably doesn’t have any direct role, except through psychology. But, of course, psychology can be critical in, particularly, international financial markets.

So what’s going on is this whole thing about quantitative easing, which they call QE for short, which the Fed is phasing out–which they call tapering for some reason–in any event, the international markets have convinced themselves that this is going to be some really big deal for them–and not particularly likely that it would have been, but if they think it is, it is. So they were prepared to be upset. And then, when they get specifics and that specific was seeing, as you say, the exchange rate fall very sharply and very quickly in Turkey and in Argentina and in South Africa, and that instantly meant that it was a big issue for their central banks as well–. And that puts you into the role of politics as well: is the central bank going to clamp down on the money supply? And if so, maybe that will reduce inflation, but it probably will very substantially reduce growth in these countries, and if you substantially reduce growth in these countries, of course, that’s a big deal for the unemployed, but it’s also a big deal for the elected leaders.

DESVARIEUX: Bill, I want to talk to you about what other experts are saying about this issue. You have New York Times columnist Paul Krugman. He’s arguing that the Fed’s goal is really to stimulate the domestic economy, and therefore points to international financial deregulation as the main factor behind speculative bubbles in international markets. Why have so many countries come to embrace financial deregulation?

DESVARIEUX: What will the human costs be?

BLACK: Well, it depends on what actually happens. Again, Krugman I don’t think is talking about bubbles in South Africa and in Turkey. Possibly in Argentina. But he’s–certainly everybody’s worried about bubbles in China, and China is a vastly bigger economy.

Meanwhile, you just see these tremendous drops in exchange rates, and if you’re a finance guy or gal, you’re going, well, what happens when you get these tremendous drops in exchange rates? Well, some of the times you get a much bigger crisis and what we call contagion, which is when a crisis in one place spreads through all of those emerging markets, produces what we call a flight to quality, which means you yank your money out of the less developed nations and you bring it back to the United States, so interest rates in those other countries can increase while interest rates in the U.S. fall. And this can be very bad for the less developed sector of the economy.

DESVARIEUX: Alright. We are certainly going to be covering this story heavily here on The Real News.

Bill, always a pleasure having you on.