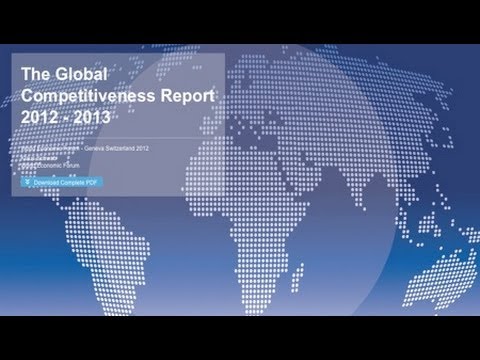 PAUL JAY, SENIOR EDITOR, TRNN: Welcome to The Real News Network. I’m Paul Jay in Baltimore. And welcome to this week’s edition of The Black Financial and Fraud Report with Bill Black.

Bill’s an associate professor of economics and law at the University of Missouriâ€“Kansas City. He’s a white-collar criminologist, a former financial regulator, and the author of the book The Best Way to Rob a Bank Is to Own One. And Bill joins us today from Davos, Switzerland.

What are you doing in Davos, Bill?

So Davos has this annual meeting, the World Economic Forum, that brings the wealthiest corporate heads and some key politicians out as well, and they work together and purportedly make the world betterâ€”and some people are rather dubious about that. Greenpeace, as a counter-Davos event, gives the Public Eye Award to entities that people vote as the worst corporate entities in the world during that relevant time period. And I was brought out in particular for the award to Goldman Sachs, which focused on Goldman Sachs helping Greece lie about the state of its debt so that it could get into the euro and, you know, the disasters that followed from all of that.

But I was asked to talk about more why we have so much fraud, why we have these financial crises, and what role this World Economic Forum plays in actually making the world a worse place instead of what they purport to do, of course, which is make it a better place.

JAY: Yeah. So give us a sense of what you said there.

BLACK: So I researched what in God’s name the World Economic Forum actually does. And it has two primary products. One is this global competitiveness index, and the second is a global risk report. And I discovered that this competitiveness index is really a glorified expanded version of the Washington consensus.

And the Washington consensus, to review a bit on that, was what the IMF and the World Bank and the Bush and Reagan administrations and such agreed should be imposed on Latin America in the context of their debt crisis to ensure that we got repaid, our creditors got repaid. And the central policy of all of that was austerity. And no surprise, the World Economic Forum has been big on pushing austerity in the Eurozone. And we’ve discussed a number of times how that has led to pushing the entire Eurozone into recession in places like Greece, Spain, and Italy, into Great Depression levels of unemployment.

But it turns out that Davos does these indicators, these supposed competitiveness indicators, that also pick up a bunch of the things in the Washington consensus. And in particular they push for deregulation and they push for tying compensation of executives to supposed performance. And it turns out both of those things have been central to creating the criminogenic environments that have produced our crises. So instead of making things better, they’ve actually made things much worse. And it’s particularly nasty because the whole purpose of this competitive index is so you can, whatever country you’re in, take the index score for your country and go to your national legislature and say, we need to weaken regulation, we need to giveâ€”make it easier to fire employees, because we’re not very competitive compared to whatever neighboring nations are or [crosstalk]

JAY: Right. So, to put this in sports terms, this is like international standings of countries in the race to the bottom.

BLACK: Exactly. Designed by business for business to make it easy for business leaders to become ever wealthier at the expense of everyone else. Now, I don’t think they intend to make the world a better place for crime, but that is the unintended consequence of what they’re doingâ€”and, of course, in some cases it’s quite intended by some of the business people that are doing it.

So it also means that this global competitiveness index is ridiculously embarrassing. So I looked at what they rated, places like Ireland, Iceland, Spain, the United Kingdom, in terms of the soundness of their banking system. It has a separate scale for that. And the way they create this is by just taking surveys of business leaders, which is, of course, not a very good scientific approach in any event. But who was top of the charts back in 2006, 2007? Well, none other than Ireland, the United Kingdom, and Spain, and Iceland not all that far behind. And guess who is today absolute rock-bottom the worst country in the world at 144th ranking? That would be Ireland, the one they claim was the third-best banking system in the world at a time when the Irish banks were actually deeply insolvent. Now they say, oops, sorry, it’s really the worst banking system in the world. And the United Kingdom, which they said was the absolute best banking system in the world, well, almost every large bank in England was insolvent. Well, they’re now 97th in the world.

JAY: Right. When you say that this encourages criminal activity, this is because if you tie executive salary compensation to performance, it encourages phony performance. As long as you can make it look on your books like you’ve made money, you get more money. It has no bearing on how sustainable or even how real it is.

BLACK: That’s correct. And it’s another weakness of their survey mechanism. You know, it just says something like, do you, your country, tie pay to performance. Well, yeah, supposedly, but in a way that actually encourages fraud because it’s heavily based on short-term reported results, which are easy to pervert through accounting fraud. And that’s exactly what it meant, and that’s exactly why it got those rankings so bad. I mean, the Irish banks, the United Kingdom banks, the Spanish banks, the Icelandic banks were all reporting record profits so that they could goose their bonuses to their executives under their performance plans.

JAY: Now, is there any sense do you get from theâ€”I don’t know if you had time to spend time talking to people in the official Davos, but do you get any sense that there’s a recognition that this great neoliberal vision they’ve been promotingâ€”obviously for some of their stakeholders it worked very well, ’cause it made them very rich. On the other hand, the global economy’s a complete basket case.

BLACK: No. They, in fact, as recently as 2012 did a publication entitled Rethinking the Financial System. They said actually not a whole lot of need to rethink it, because while fraud is extremely negative when it happens, it’s also extremely rare, and you can simply get rid of it through mechanisms like having audits and good governance. And, of course, they have indexesthat purport to do audit and good governance, and no surprise, they said again that places like Ireland and the United Kingdom and Iceland and Spain had superb controls. And there are simply no success stories whereâ€”.

JAY: And I guess it also works well when the United States, for example, can say what happened simply isn’t fraud, even though I don’t know what else it would be, ’cause it meets every definition, one would think, of fraud in terms of what Goldman and others like them did.

BLACK: Absolutely. In fact, the government, through two different agencies, the federal housing finance administration and the Securities and Exchange Commission, has put in former legal pleadings that Goldman Sachs did engage in acts that constituted fraud against both Fannie Mae and Freddie Mac and their own customers.

JAY: Thanks very much for joining us, Bill.