JP Morgan served as the principal bank for Bernie Madoff, causing losses of $20 billion, yet they will pay only $2.6 billion in settlement charges

JP Morgan served as the principal bank for Bernie Madoff, causing losses of $20 billion, yet they will pay only $2.6 billion in settlement charges 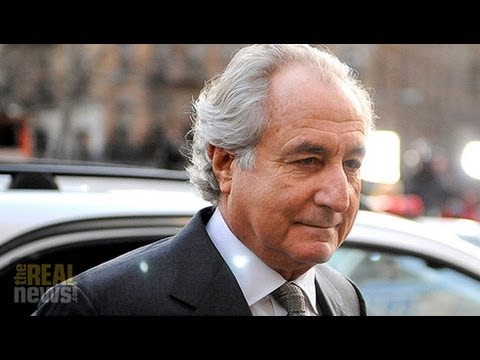 KAYLA RIVARA, TRNN PRODUCER: Welcome to The Real News Network. I’m Kayla Rivara in Baltimore. And welcome to this latest edition of The Black Finance and Fraud Report.

Now joining us is Bill Black. Bill is an associate professor of economics and law at the University of Missouri-Kansas City. He’s a white-collar criminologist and a former financial regulator. He’s also author of the book The Best Way to Rob a Bank Is to Own One. And he’s a regular contributor to The Real News.

Bill Black, thank you so much for joining us.

RIVARA: So right now it looks like JPMorgan is set to pay a possible $2.6 billion in settlements, this time pertaining to the Bernie Madoff situation. Can you give us the latest on this and what it really means for enforcing accountability on Wall Street firms?

BLACK: Yeah. It’s a brand-new year, but it’s the same old JPMorgan and the same old Justice Department. And so we have JPMorgan in what is about the 12th massive fraud scheme, measured by causing losses of well over $100 million. In this case, it helped–contributed to losses of well above $20 billion, though it’s going to be allowed to settle for about $2.5 billion. About $1.7 billion goes to the Justice Department, about $250 million goes to the financial regulator, the Office of the Comptroller of the Currency, and about $500 million goes to the individual civil plaintiffs who say they were defrauded by Bernie Madoff. Now, the Justice Department money will flow through to the victims of the Madoff fraud.

What’s this all about? It’s that JPMorgan Chase knew–first, it served as the principal banker of Madoff. And second, it knew that Madoff had violated a whole series of things that should have led JPMorgan to alert the Justice Department through a criminal referral of likely criminal action. In fact, a JPMorgan executive said that what was going on was almost certainly a Ponzi scheme.

And when the Office of the Comptroller of the Currency, the federal regulator for JPMorgan, finally learned about this stuff and went to JPMorgan to get the information they had so that they could try to put together whether Madoff was engaged in a Ponzi scheme, JPMorgan refused to give the information and the Justice Department refused to enforce the subpoena.

RIVARA: So from here there’s nothing to be expected? Are there going to be any more proceedings, legal proceedings with this? Or is it a closed case?

BLACK: It’s a deferred prosecution agreement, which is a lot of big words for we ain’t going to prosecute you. And officially, two years from now it will all go away and it’ll be as if the Justice Department was never involved.

RIVARA: Well, Bill Black, thank you so much for joining us.