The two-term shuffle and who wins in ’08 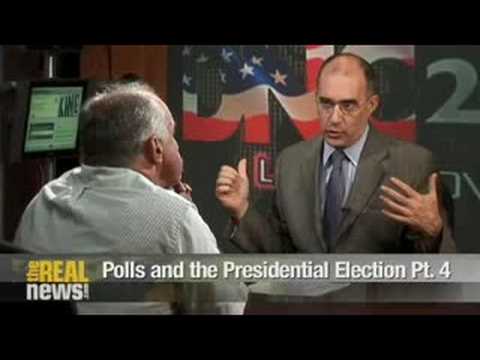 PAUL JAY, SENIOR EDITOR: Welcome back to our series of interviews with Barry Kay on polling and the coming US elections. So, Barry, based on historical experience, based on what we’re seeing now in the polls, who’s going to win the election?

PROF. BARRY KAY, PUBLIC OPINION, WILFRED LAURIER UNIVERSITY: Well, there’s different yardsticks. I will tell you that, indeed, my favorite one suggests that it will be Obama, and that’s based on a pattern that’s been in place, really, during the era of television, since the end of Truman and Roosevelt, that since the election of 1952 we’ve seen a pattern of each party being in for two terms and then being out for two terms. So we saw Eisenhower win two terms. The Democrats—it wasn’t Kennedy for both, but the Democrats for two terms; the Republicans. There’s only been one exception, the election of 1980, to that particular pattern. If Carter had won reelection in 1980, that would have been consistent with the pattern. But without exception, we’ve seen two terms in, two terms out. That would indicate that this year should be a Democratic year, and, frankly, 2012 should be as well; and 2016 and 2020 will be Republican. So not only am I giving you the winner of this election, but elections into the future.

JAY: So what might change that? Or do you think we’re headed towards that direction?

KAY: Well, I think we’re heading to that direction.

JAY: I mean, is there something that could happen in terms of international crisis that would change this?

KAY: Look, it’s interesting, because Barack Obama’s ability to sort of become taken seriously in a year where Hillary Clinton was thought to be the overwhelming favorite for the Democratic Party, what did it within the Democratic constituency, the people who voted in those early caucuses and primaries, was in fact the Vietnam—not the Vietnam War; I’m dating myself—the Iraq War. In fact, now, though, that issue probably is hurting him, that, indeed, I think Obama’s strong card for November is not foreign policy or terrorism, but rather is the economy.

JAY: Now, a lot of people inside, I guess you could say, the more liberal, progressive wing of the Democratic Party are kind of astounded at that, that the Iraq War has been such a disaster, the whole war on terror, in terms of American foreign policy and repercussions thereof has been mostly—many people have called one of the great strategic defeats of American policy in the history of the country. How on earth does that become a plus for McCain and a negative for Obama?

KAY: Because not everybody thinks like the people you’re describing at the moment. Those people were very active in the—.

JAY: But doesn’t the polling show a vast, vast majority of Americans against the Iraq War now?

KAY: Most Americans, even now, would say that the Iraq War was a mistake and America shouldn’t have gotten into it. But replaying history isn’t something that’s on the minds of the swing voter at the moment. We are in Iraq—we being the Americans—for better or worse, and the question is how to extricate ourselves and how to deal with it. But in general, McCain does well on the issue because he is seen to be more experienced and more knowledgeable. The people who supported Obama in the primaries will certainly still support him strongly. The question is now we’re no longer talking about just Democratic primary voters; we’re talking about a broader audience, and among those people, to the extent they’re concerned about international politics, McCain seems to have more credibility. Economics is a very different issue.

JAY: But are we finding a phenomenon something like what happened with Kerry in the last cycle? Kerry for the whole summer before the election barely said a word about Iraq, which one would have thought would have been Bush’s vulnerability. He didn’t start really attacking Bush policy in the Iraq War seriously until, like, about September. But this whole idea that you can’t offend this middle vote that you’re trying to get over, these people that might go Republican and might go Democrat—you’ve got to be the patriot; you have to be the strong military guy; if you critique Iraq policy too strongly, you may look weak—are we getting some of that now with Obama? Like, Obama’s major plank when he started off on this run was, "I was the guy that said no to the Iraq War." And we’re not hearing that now. In fact, he just chose a vice president who previously has said yes to the Iraq War.

KAY: Elections are won in the center, and primaries are won on the fringes left and right.

JAY: Well, they’re won on the center, but they also seem to be lost on the center. I mean, I know you have the cycle of the two, the eight-year terms, but last year Bush should have been extremely vulnerable, and a lot of the critique of Kerry is he lost because he only played to the center.

KAY: Bush has been in the toilet bowl, really, since the summer of 2005. It goes back to Hurricane Katrina and indeed some other events of that year. 2004 he wasn’t doing so badly. And that was why—Kerry lost for a whole bunch of reasons. It was a close election. And within 30,000, 40,000 votes in Ohio going the other way could very well have turned that around. This is different from that. But I’m saying this because there are still plenty of people that feel as you do on the issue. Obama’s strongest issue is the economy. And I think the addition of Biden to the ticket will help somewhat, but elections normally don’t turn on who the vice presidential candidate is. If Obama’s going to win, it’s going to be because people think that the economy is a more important issue than foreign policy.

JAY: But that’s a very easy thing to change with a Republican White House that can have a drama in Georgia, or a drama in Iran, or a drama somewhere else. It’s very easy to get foreign policy back to the front of the—.

KAY: Could be. Without question.

JAY: So what I’m getting at is elections still won on the center, when you have 40—and you’re saying even more than 40—percent of people who have tuned out, who don’t vote.

KAY: Well, those people don’t vote at all, period. But among the people that do vote—.

JAY: But is it because the election campaign’s always directed towards the center?

KAY: That’s the reason election campaigns, in a close election—we’ve had some decisive elections over the years. Well, this one looks like it’s going to be close. But elections, the people that are concerned about winning elections play to the center, frequently less educated, less involved people, because those are the people that tend to be pivotal.

JAY: Just to elaborate this critique a little further, a lot of people are saying is what happens is, when the Democrats play to the center, they lose identity, they lose that they have principles they believe in. And so now you have Obama, who was against oil drilling, now is wavering on the question of oil drilling. You had Obama, which was clearly "I’m against this war"; he’s now talking about residual forces in Iraq. That as you move to the center, you actually lose who you are. And then McCain actually winds up, and before that Bush, and you’ve heard this in polling, I’m sure, at least they’re people that know what they believe in, they have principles, you can define who they are. I mean, is part of this Democratic strategy weakening them? And a lot of people are saying that an election the Democrats could never lose they’re finding a way to lose.

JAY: Well, I’m not talking about Nader, though. I think that’s a separate question. I’m talking about that it’s difficult for people to decide between—if Obama and McCain start looking too closely, too alike, on policy and then it simply comes down to merely personality, then these sort of advertising factors play in much more strongly.

KAY: I’m not unsympathetic to your argument, personally, but I—.

JAY: But what does polling tell us about this?

KAY: Look, in my own personal evolution, I remember I was a supporter of Gene McCarthy back in ’68 and George McGovern in ’72. I learned something from those campaigns. America’s probably never going to elect a candidate that I might personally like; they have to vote for somebody more moderate. If people who are pure enough to suggest that they are prepared to sort of water their wine a little bit, those people are responsible for electing the greater of the two evils, rather than the lesser of the two evils, if we [inaudible]

JAY: No, I’m actually making quite a different argument. The argument I’m making is that it strengthens McCain’s campaign to water down Obama as someone of principle who takes strong stands rather than compromising on every issue.

Dr. Barry Kay is a Professor of Political Science at Wilfrid Laurier University. His research focuses on the topics of elections and public opinion. He is a past member of the Canadian National Election Study team, and recent publications pertain to electoral systems, public opinion polling, and the impact of single-issue interest groups. He has…