Adam Jackson, CEO of Leaders of a Beautiful Struggle and co-chair of the 34-person task force in charge of laying the fund's groundwork, says that letting the community decide where the money goes will ensure it gets to the right places, particularly black-led organizations in Baltimore

Adam Jackson, CEO of Leaders of a Beautiful Struggle and co-chair of the 34-person task force in charge of laying the fund's groundwork, says that letting the community decide where the money goes will ensure it gets to the right places, particularly black-led organizations in Baltimore 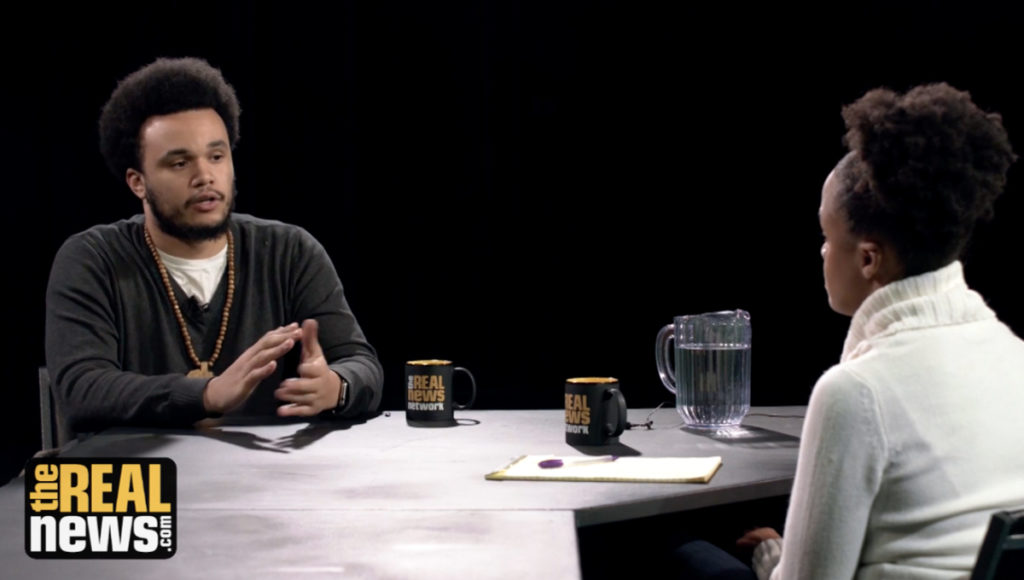 L. SNOWDEN-MCCRAY: Welcome to the Real News Network, I’m Lisa Snowden-McCray, editor-in-chief of the Baltimore Beat, an independent weekly newspaper in Baltimore City. At a time when some Maryland leaders, notably Governor Larry Hogan, are looking to crack down on crime, others are taking a longer view, pushing the idea that the way to stop crime is by focusing on and nurturing the city’s youngest residents. The Baltimore City Council recently approved the $12 million youth fund, even making sure that smaller groups dedicated to working with kids in the city get the money they need to do their jobs. Adam Jackson, CEO of the grassroots think tank Leaders of a Beautiful Struggle, co-chaired a 34-member taskforce aimed at laying the groundwork for the fund. He’s here to talk a little bit more about it. Thanks for being here, Adam.

A. JACKSON: Thank you for having me.

L. SNOWDEN-MCCRAY: Okay, so we know now that it’s been approved. Tell me a little bit … Actually backing up, how you guys got involved with this?

A. JACKSON: So the beginning of this year, in 2017, after the referendum was voted for in the November election, so there were a bunch of meetings convened by different people around the youth fund. So essentially what was happening is that they were a bunch of white corporate nonprofits moving in, trying to make themselves the center of the resources, the center of gravity for the fund. So a lot of our advocacy in general around Baltimore has been criticized as a nonprofit sector in terms of who gets resources and who doesn’t, and traditionally, how they suck up a lot of the air when talking about getting resources from not just the government, but philanthropy.

So part of our intervention in the process was to figure out how to make sure that that money went to smaller, particularly black-led organizations and groups in Baltimore, to make sure that we finance the institutions in our community that are working on behalf of our people.

A. JACKSON: I could speak just for LBS. One of the things that was happening like I mentioned in terms of those early meetings, particularly, there was this nonprofit organization, Strong City Baltimore, that was convening meeting with an outside group called Participatory Budgeting, and a lot of their meetings, they weren’t centered on how to make sure it was racially equitable. It was a nonprofit essentially trying to sell its model around how they do participatory budgeting. So we intervened and criticized the process and actually to the city council president’s credit, they reached out to us directly and asked me to be co-chair of the taskforce, and I accepted the role.

It was in the beginning parts, we were trying to make sure that the taskforce had meaningful community participation. I actually ended up happy with the results because of the actual recommendations that we put out which focus heavily on racial equity and ensuring that smaller organizations got capacity-building resources, so they could build out their programs, not just financing a program here and there, but actually creating more of an ecosystem for organizations for youth in Baltimore, so that to me was the biggest thing that came out of it, was that, those results.

L. SNOWDEN-MCCRAY: So I feel like the more people you invite to the table, the … It’s good, but also it can be a little bit crazy. Being in charge of 34 different adults with different outlooks on life and opinions seems like a gigantic task. How did you guys get work done? How did you get on the same page with everybody, and even have something that you feel like was successful?

A. JACKSON: Me and my co-chair, John Brothers from the T. Rowe Price Foundation, we actually talked about the in the very beginning. Part of the issue was to figure out how we lead it? So one thing I was very clear to him and everyone else about the taskforce is that there needs to be leadership by black people in Baltimore to make sure that this goes the right way, and he agreed to that, so that was the first step. Because me and John worked so well together on the taskforce, it made everything else function.

Also, as you said I was probably one of the younger people, probably the youngest person in the room in a lot of those meetings that we had, and you had a lot of people that run city agencies, and philanthropic groups, and nonprofit organizations. And a lot of them … they didn’t disagree with the fundamental idea round making sure that smaller organizations had resources and that it’s racially equitable, the problem was operationalizing it.

So I think that that energy and spirit was there around wanting to get that done, the problem was that people usually don’t have viable alternatives when you’re talking about actually implementing it. To me that’s what made the work easier down the line, is that once you figure out a way to operationalize it, then putting it into place is fairly simple. But I think a lot of people, they just hadn’t been used to talking about that in a real way. It’s all very theoretical and abstract in the nonprofit sector, but it’s gonna talk about racial equity, but we don’t really know how to put it in place. I think we ended up working well together at the end of the day because people agree fundamentally on the concept, but most of the hard work came when we had to operationalize it.

L. SNOWDEN-MCCRAY: Yeah, ’cause I feel like people are usually creatures of habit, and what you guys are doing in the things I’ve read, and even our conversations off camera, that you’re trying to flip everybody’s brains to think about something a little bit different. One of the things that really made me wanna talk to you is that you’re … In looking to kind of de-center white power and the nonprofit industrial complex, you’re taking people that maybe aren’t trained for this work and you’re educating them so that they’ll be able to do this work and really other work in the future for the city. Can you talk a little bit about that?

A. JACKSON: Yeah, so one of the major differences between this fund and how philanthropy is set up generally, is that usually in philanthropy you have the program officers who decide where money goes, and a portfolio, and that’s usually millions of dollars or hundreds of thousands of dollars. These people are mostly making arbitrary decisions about who gets money and who does not. In many ways that inculcates the philanthropic sector from accountability because then they can point fingers to one another at each other’s organizations and say “Well this person does that,” or whatever.

So part of the difference, like you said, in terms of flipping that, we’re putting residents at the center of how money is decided — or allocated, rather –because we recommended from the taskforce that the city instead have a new nonprofit intermediate organization that is controlled and accountable to by Baltimore residents and that we have an assembly that will replace those program officers, or what we think of program officers. Instead of paying somebody $100,000 a year to decide where money goes, you instead can compensate city residents, have them be in a group setting and look at requested proposals and decide where money goes in their community, so that’s dramatically different than what happens now. It’s a very small group of people who decide where millions and millions of dollars go in Baltimore every year.

The issue is because we don’t see it as an industry, we just think that that’s just benign, that it’s just by magic that that happens, but in reality a lot of these philanthropic and nonprofit groups are making money off of the backs of black people and off the oppression of black people. And they know they’re not accountable to us because there’s just nothing designed in terms of infrastructure to make sure that they’re accountable to black people in a majority-black city. So part of the goal and objective is to not only have input, but to put us at the center of deciding where resources go.

Besides that, also focusing on capacity building, because a lot of the time, you can have a black organization that works with several hundred students every year, or young people, but they can’t get any money to build out their actual institution. They’ll get programming money, they’ll get large swaths of students for their programs, but when we talk about their accounting, their legal infrastructure, some of the very bare bones things that a lot of white organizations have the ability to get because they had the resources to do it, black people don’t have those same access to resources.

So the capacity building piece is gonna be revolutionary, I believe, because we’re not just talking about programs for kids every year, we’re talking about people being able to build and scale up their institutions so they can actually go out and receive more money or get larger contracts, or do more business. As opposed to right now, it’s a very small group of … It’s a small pot of dollars that you can go after, and a lot of times just for programs. So having residents at the center of it, and the piece about institution building, where you talking about through a racial equity framework, those are the things I think that make it revolutionary in terms of where public dollars go.

L. SNOWDEN-MCCRAY: Thank you Adam. I’m Lisa Snowden-McCray of the Baltimore Beat, and you’re watching the Real News Network. Join us for part two, when we talk about what’s next for the Baltimore City Youth Fund.