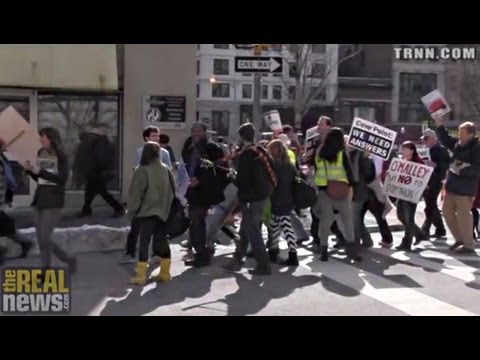 There is a fracking boom happening across the United States, and the U.S. is now one of the leading producers of natural gas in the entire world.

We reached out to the company behind the plan, Dominion Resources. They say the plan will be safe, bring badly needed money and jobs into the community, and is the cleanest way to extract natural gas from the environment.

PAM FAGGERT, CHIEF ENVIRONMENTAL OFFICER, DOMINION ENERGY: There’s really been an extensive amount of work to ensure that this facility will be protective of the environment after it’s built. The facility itself is designed to minimize the emissions and the environmental impact. In addition, we’ll be using processed gas.

NOOR: We’re here to talk to the protesters and get their response to what Dominion Resources said about this facility.

Why it’s important for me to be here is, as an environmental engineer, one thing we have to understand is that the actions that we take have effects on the environment. And the effects on the environment also affect us as human beings as well. So we have to understand the effect of every single action that we’re taking, especially in regards to the environment. So such things like fracking, for example, though, while it’s economical and there’s benefits to it, though, at the same time, it’s polluting our water, it’s polluting our air. That’s definitely something that we have to take the costs into consideration.

It’s dirty energy. If you factor in all the piping, the fracking, the putting it on tankers to Asia, the liquifaction, liquifying, if you take all that energy intensity together and calculate it, it’s worse than coal in terms of impacts on climate change.

HEATHER MIZEUR, MARYLAND STATE DELEGATE, DISTRICT 20: My name is Delegate Heather Mizeur. I’m a member of the Maryland General Assembly from Montgomery County, and I’m a candidate, Democratic candidate for governor of Maryland.

There is no way that we start moving forward on this and not ratchet up the pressure to do fracking in Maryland. And even if we were to say no in Maryland, we would become an international sacrifice zone for having all of the infrastructure necessary to travel that gas from where it is being fracked to the extraction facility. This is a bad deal for Maryland.

NOOR: And so, you know, supporters also point to the fact this is going to bring in tens of millions of dollars of revenue for Calvert County every year, and it’s going to bring good-paying union, local union jobs to the–which is needed all across Maryland, all across the country.

MIZEUR: Of course it is. My father was a United Auto worker for 32 years. I have a very strong connection to the labor movement. I believe in project labor agreements and putting people to work rebuilding our schools and working on a range of projects, building our infrastructure related to offshore wind.

If Dominion were to invest the same $3.8 billion in our offshore wind projects, we would create as many or more jobs than what is being proposed.

NOOR: Where does the political fight stand right now, and what are the chances that this will be stopped?

TIDWELL: Well, no one thought the tar sands pipeline would be stopped, much less delayed by three years. It seemed to be a done deal. The White House was behind it. And it’s been delayed and may never be built.

We think the same thing’s going to happen with Cove Point. We’re moving the dial. The public’s responding, getting involved. People get this issue and they’re mobilizing. And I think the politicians are going to follow.

NOOR: The debate in Maryland continues to rage whether to build this natural gas processing and shipping facility in Cove Point, Maryland.

Reporting from Baltimore, this is Jaisal Noor for The Real News.