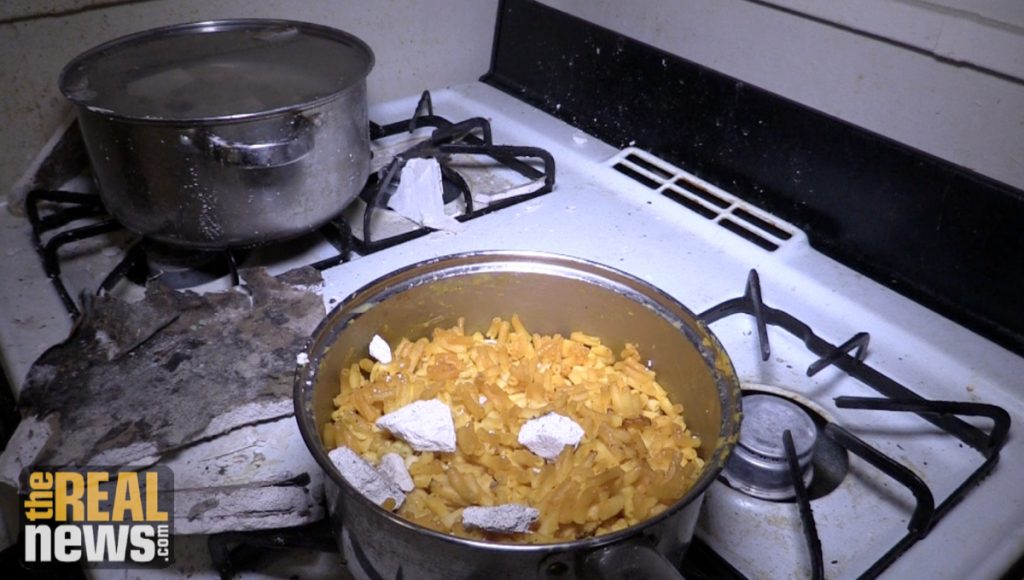 TAYA GRAHAM: As The Real News continues to cover the plight of residents who live in Baltimore public housing, the challenges of simply surviving day to day couldn’t be more stark.

ROXANNE: You know, and these places are so, so bad. You know, the rodents, the bed bugs, the smells, the pipes. Everything is wrong with these places.

TAYA GRAHAM: Particularly the story of Tanetta Wilson. The long-time resident of Perkins Homes bravely shared her story of being forced to give sex to pay for repairs.

TANETTA WILSON: He just stated that we can clear the bill up if you perform a sexual act with me.

TAYA GRAHAM: A tale of abuse that went viral, but since then, things have only gotten worse. Over the weekend, a piece of ceiling collapsed on Tanetta as she prepared dinner for her family. A traumatic event which was the result of deteriorating conditions in her apartment, and another example of what women in city-run housing must endure. So Tanetta, tell me what happened to you last night.

TANETTA WILSON: Well, yesterday I was in the kitchen cooking my dinner, and I heard the water in the ceiling just bubbling. The water just started coming down and the sheetrock started falling down on top of me and my food, inside my stove. I can’t even turn the stove on because it’s a horrible smell now. I haven’t even tried to cut it on to see if it actually works. I just left it alone.

TAYA GRAHAM: When the plaster in the ceiling fell down, what happened to you?

TAYA GRAHAM: Now, didn’t you actually have to go to the emergency room last night?

TANETTA WILSON: They did check my eyes and they removed some of the sheetrock from my eyes. They also checked my head for injuries. They stated that I had a concussion and they prescribed some medication, Motrin for me, and gave me antibiotics for my eye.

TAYA GRAHAM: When you came home from the emergency room, how did you feel?

TANETTA WILSON: I was nauseous, I was pretty sore. I just wanted to take a shower and get all the debris off of me.

TAYA GRAHAM: Now, you said that the leak from the ceiling actually might be coming from your bathroom?

TANETTA WILSON: It could be coming from the toilet area, I’m not sure, but when I turn the shower on, water leaks as well. When I flush the toilet, water leaks, so I don’t know exactly where it’s coming from.

TAYA GRAHAM: Have you reported this leak to the management for your building before?

TANETTA WILSON: Yes, when I reported it to them before, they actually moved me and my children out into a hotel and came in and fixed the bathroom area and moved us back in here, but we still continue to have the problem.

TAYA GRAHAM: Tanetta, what are your next steps? What can you do next to get some kind of help?

TANETTA WILSON: My next step, I’m unsure. I’m really unsure. I no longer want to live in public housing because of the maintenance issues. They don’t fix anything when you call them, and I don’t believe they’re qualified to do the jobs that they’re being paid to do. They want this property. This property is very valuable. It’s a tourist attraction as well, and we are low income. We can’t afford to shop in these stores that they’re putting up around us, so their means of putting us in the county and allowing other people that have the means, or rich people that can spend the money here, let them live here and keep the revenue going for the city.