Safe consumption sites have been used around the world for decades, and advocates hope they could help Baltimore decrease its overdose death rate--one of the highest in the nation.

Safe consumption sites have been used around the world for decades, and advocates hope they could help Baltimore decrease its overdose death rate--one of the highest in the nation. 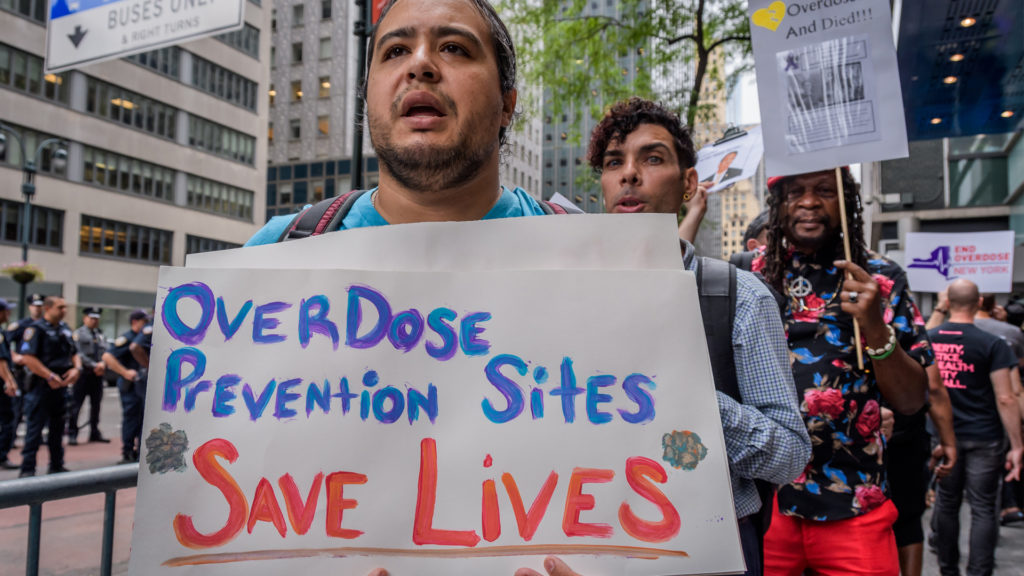 JAISAL NOOR: Baltimore has one of the highest overdose death rates in the country. Twice as many lives are lost in Baltimore to overdose and to homicide. Emboldened by a recent federal court ruling, officials in parts of the United States are proposing sanctioning safe consumption sites to help save lives.

KELLY: Well, I think the overdose prevention sites are very good because they keep you from being alone when you’re using.

JAISAL NOOR: the effort in Baltimore has been spearheaded by council president Brandon Scott.

BRANDON SCOTT: Since 2015, there’s been 3,500 fatal overdoses in Baltimore. That outweighs the number of people that we lost to even gun violence in Baltimore city. This is about us re-humanizing people and understanding that our brothers and sisters, our mothers and sons who are struggling with addiction are human, and that they deserve to be treated fairly and they deserve to get the help that they need.

JAISAL NOOR: This effort builds on the work that activists in the field of harm reduction had been doing for years.

JAISAL NOOR: Rajani Gudlavalleti is the Community Organizing Manager at Baltimore Harm Reduction Coalition. She says, “Informal safe consumption sites have existed in Baltimore for years. Despite the heavy handed tactics employed in the war on drugs.”

JAISAL NOOR: Europe and Canada have used legal safe consumption sites for years with dramatic results, and studies have shown they’ve helped reduce overdose deaths, promote cessation, and help get users into treatment. Baltimore was one of the first cities to adopt needle exchange services, and harm reduction advocates say the potential to save lives by giving people a safe place to go is the next step in battling what has been called the opioid epidemic or overdose crisis.

Journalist Brandon Soderberg has detailed the potential as well as the challenges put forth by Council President Brandon Scott to establish safe consumption sites, or as Baltimore officials have been calling them, overdose prevention sites, for Filter Magazine, a harm reduction nonprofit.

Basically the argument was that this falls under the same concerns as a crack house or a rave, because it’s the place we’re facilitating and enabling people to do drugs, therefore it’s illegal, and it’s particularly illegal under the statute. What a federal judge decided was that this was not the same as those places because it is facilitating people doing drugs safely, and its express intent is to help people do drugs safely, or to get off of drugs.

JAISAL NOOR: Safe injection sites have existed for years around the world. What’s the track record been and how does that fit with this narrative about, you have to be tough on crime, treat this as a moral issue and the idea that you’re putting people in danger by having safe consumption?

BRANDON SODERBERG: Yeah. So safe consumption sites, again, they’ve existed since I believe at least the ’80’s in Europe and other places. They’re this classic idea where most of the world’s way ahead of us on this and the drug war, the United States hasn’t had one. The first one in North America was Insight in Vancouver that opened in 2003, and the track record with these places is incredibly good on terms of not having people die, not having any fatal overdoses. So when people overdose at these sites, there are medical professionals or other people there that can help them not die from that overdose through Naloxone, and even just plain old CPR.

A metaphor that Russell Maynard, who’s a person who works through Insight in Vancouver, provided to me was, that they’re extensively lifeguards, and he says that in a really modest way, you want to think this is really super complicated. Yeah, but it’s just having people there to watch and observe and help people if they’re overdosing, drowning in this metaphor and help them from drowning, you stop them from dying. You can’t stop someone from drowning if you’re not there to help them.

BRANDON SODERBERG: The local paper here, The Baltimore Sun, generally wrote about the same issue that I did for Filter. Filter is partially a nonprofit harm reduction publication that part of their job is to provide strong and informed coverage about drugs and the drug war, and also counter these narratives. It’s bigger than the Baltimore Sun, but that article that the Sun did about the same issue fell into a lot of the problems you see. We’ve really been moving away from calling people who use drugs, addicts. You shouldn’t assume someone who uses drugs is an addict.

Also certain drug users have specific definitions of what addiction is. There’s that concern. Even for me, I don’t like the word addict, but I’ve always thought that calling someone or calling myself as a former drug user or user was okay. Why it might be okay for me, it’s not the publicly understood stigmatizing language. If you hang out with people who use drugs, the word junkie is used sometimes proudly. But the word junkie has a very different meaning if you’re not in that community, or if you’re some crappy politician talking about how we need to close these places down. So that stigmatizing language.

And then you have just a lot of assumptions about drugs that go back to that same drug war propaganda. I think reporters, and community members too, get caught up in just associating the presence of drugs and the presence of people that use drugs with crime, as if those things can’t be extracted.