The city has used just 2% of their allotted funds to help residents experiencing sewage backups. Baltimore City Council held an investigative hearing to grill the Department of Public Works.

The city has used just 2% of their allotted funds to help residents experiencing sewage backups. Baltimore City Council held an investigative hearing to grill the Department of Public Works. 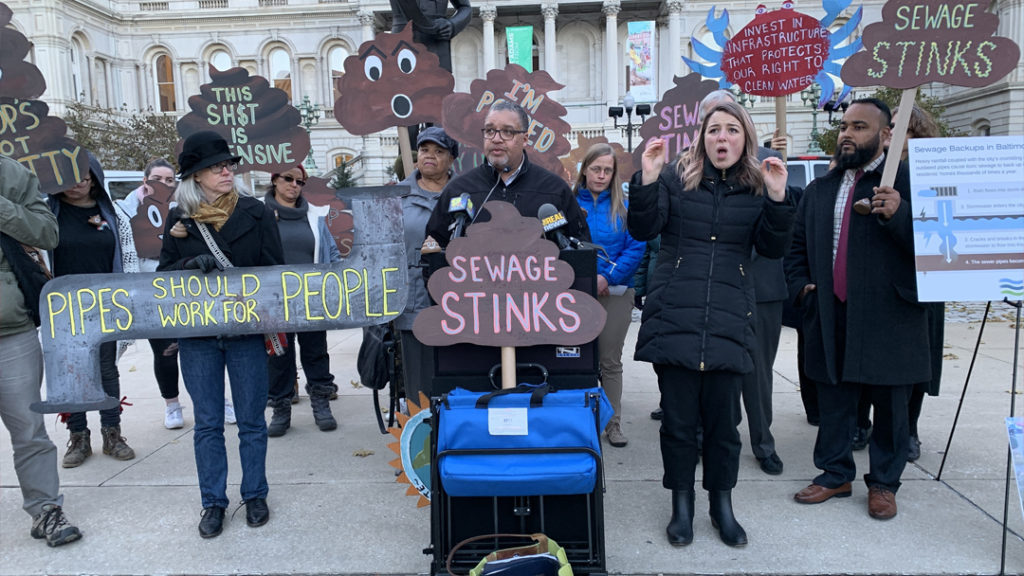 NATAZSA BOCK-SINGLETON: We had to take kids down into basements and clean up human shit.

DHARNA NOOR: It’s The Real News. I’m Dharna Noor in Baltimore where officials and advocates have been digging into some serious shit. On Wednesday, City Council’s Land Use Committee held an investigative hearing on the city’s reimbursement program for basement sewage backups. Councilman Kris Burnett sponsored the resolution to have the hearing.

KRIS BURNETT: This is a public health crisis that residents in the city of Baltimore had been impacted by for literally decades, the issue of wastewater backups into their home.

DHARNA NOOR: When it rains in Baltimore, sewage flows into streams and into the Harbor. The city is closing sewage outfalls into waterways to comply with the Federal Consent Decree, but that’s putting increased pressure on the pipes. So, increasingly, wastewater is flowing into drainpipes and into people’s homes.

NATAZSA BOCK-SINGLETON: We never had any sewer backup problems until late 2017, 2018, and DPW decided to close off those outfalls. We had people in there, kids going down and volunteering to clean it up. When you look at who you can get to volunteer, you’re taking teens, you’re taking students, you’re taking Boys and Girl Scouts. And again, thankfully because Councilman Burnett had all of that information available for us, we had them all protected, but we had to take kids down into basements and clean up human shit.

DHARNA NOOR: Last April, as part of the Consent Decree, the city created an expedited reimbursement program for residents experiencing these backups. But advocates say it’s got some big problems.

DHARNA NOOR: From April 2018 to March 2019, over 4500 people reported backups, but fewer than 80 submitted applications for reimbursement, and of those, only 10 were accepted. That means of the $2 million that DPW could’ve put into reimbursing residents, they’ve spent under 15,000 and the State Council wanted to know why.

KRIS BURNETT: What happened to the other $1,985,000 set aside each year for the reimbursement program? They’re sitting in an account year to year.

DPW SPOKESPERSON: Correct. And look, I get your frustration. We have to properly spend and protect those ratepayer funds, and we pay them out when we can determine and verify that there is a capacity-related event that qualifies for the system.

KRIS BURNETT: It seems like there’s something missing that we’re not being told.

DHARNA NOOR: It seems that many people don’t know about the reimbursement program at all.

LEON PINKETT: At some point, you should be the ones going, “There’s something wrong with this; that we know we’ve got over almost 5,000 backups and we only have a hundred applications. What’s going on?”

DHARNA NOOR: DPW says they plan to do more to spread the word.

YOLANDA WINKLER: And make sure this information gets in the hands of those individuals who are having backups or who have not had a backup but could possibly be subject to one.

DHARNA NOOR: And the city could go beyond reimbursing residents. At the hearing, officials heard from a lawyer from Cincinnati. Over Skype, he explained that in his city, if residents call and say they have a backup, their city will send someone out to clean it up within four hours. This issue isn’t anything new. Councilwoman Mary Pat Clarke had experienced with it in the 1960s.

DHARNA NOOR: Advocates say they hope this hearing helps the city put an end to this decades old problem.

JENNIFER KUNZE: It’s an extraordinarily discouraging, disheartening problem. People should not be having to go through this, and people shouldn’t have to come out for hearings over and over for multiple years to try to have the city provide a program that’s adequate to the severity of this problem. So please make this the last time that people have to come out to a hearing and not see this problem resolved adequately.

URUJ SHEIKH: Hey everyone. My name is Uruj Sheikh and I’m the development campaign manager at The Real News Network. If we’re going to stand up to the corporate elites, then we need your help to make people powered media. And that’s why I’m asking you to please donate to The Real News Network. And while you’re at it, hit the subscribe button. Thanks so much.