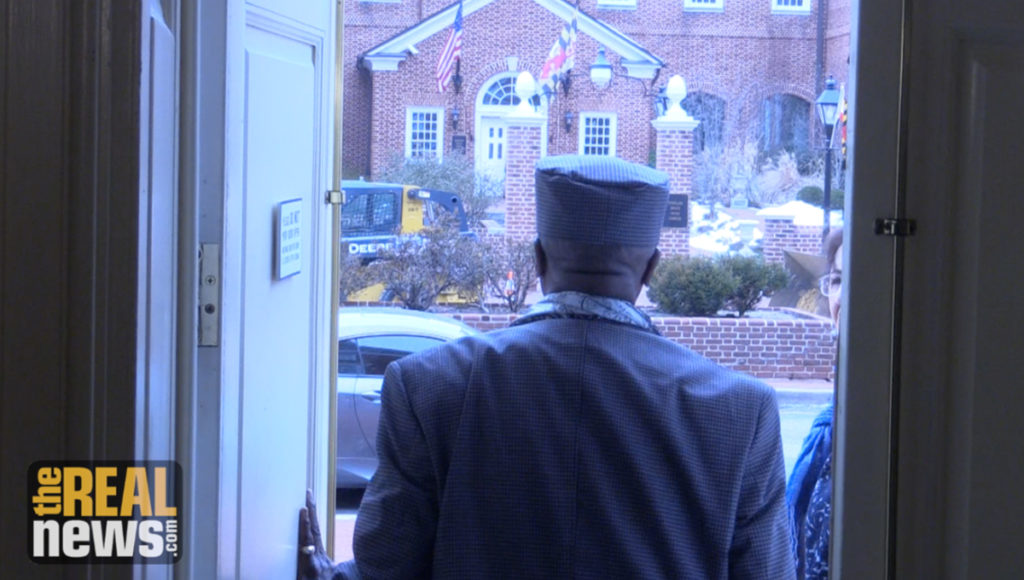 TAYA GRAHAM: This is Taya Graham reporting for The Real News Network in Annapolis, Maryland. Allegations of corruption are still flying as advocates work to remove the influence of the bail bonds industry from politics entirely.

TAYA GRAHAM: It was last year that The Real News covered this protest at a swanky restaurant in Annapolis. There, as the bail bonds industry wined and dined the delegates inside, activists called for change.

TAYA GRAHAM: The concerns that night were straight forward. The bail industry makes money by keeping people incarcerated, particularly African Americans, and that money finds its way into the pockets of politicians.

Protester: There’s other ways to handle our prison population and our offenders and things without being as unjust as we are.

TAYA GRAHAM: A vicious cycle of jailing the poor to enrich not just the bail industry but major corporations that fund it and legislators.

TAYA GRAHAM: And now recent indictments by the FBI show just how true that is. According to charges handed down by a federal grand jury, prosecutors allege State Senator Nathaniel Oaks accepted bribes from a bail bonds lobbyist seeking to turn back reform.

STEPHEN JANIS: Senator Oaks, hi. Stephen Janis from The Real News. I just want to get your sense of-

STEPHEN JANIS: You won’t talk about …

TAYA GRAHAM: So we confronted Oaks at the statehouse today, and he left the building to avoid answering our questions. The bail bonds industry has given Maryland politicians hundreds of thousands of dollars according to Common Cause Maryland. Many, like Senate Judiciary Chairman Bobby Zirkin, are in key positions to keep the industry afloat.

J. BEVAN-DANGEL: The giving patterns that we saw certainly prove some truisms that we’ve always felt were happening in Annapolis but now we have some numbers to back it up, number one being that your committee chairs are the ones that benefit the most from the industries that they oversee. Zirkin, the Senate Committee chair, 13 … 11 percent, sorry, 11 percent of his donations in the last election cycle came from this industry.

Speaker 8: Last week we heard news about a senator who has been caught by the FBI accepting bribes from the bail industry.

TAYA GRAHAM: They called for legislators to disengage from the bail bonds industry and return any donations as well as block any new efforts to turn back reform.

LAWRENCE GRANDPRE: I mean, everyone has their First Amendment right. A lobbyist can come up to you and say whatever they want. Do you listen? Do you go to the dinner, or do you invite them in? Bail bonds is different. No one should have their freedom determined by whether they have money or not, and that’s how the bail bondsmen eat so they have a proclivity to lie.

TAYA GRAHAM: Demands that some legislators say they will follow.

STEPHEN JANIS: A group of advocates that say “Hey, because of the bribes, scandal, surrounding the bail industry and just that bail is bad in general for the African American community,” are calling for the legislature not to engage with the bail industry this year. How do you feel about that?

NATHANIEL MCFADDIN: Again, the advocates have a point. They represent many of the constituents that allowed me to be here. I lean very, very closely to the viewpoint that they present so anything that moves this ball forward, we’re gonna do that.

BEN JEALOUS: What the bail industry does is it profits off of the perpetuation of debtors’ prisons. We believe we’ve evolved beyond it but if you actually go to a jail, you spend time there, you figure out there’s lots of folks there who literally have just lost their job because they could not afford to pay $1,000 or even sometimes a few hundred dollars.

TAYA GRAHAM: But for many who gathered on the first day of the legislative session, the battle over bail reform is just beginning.

NICOLE HANSEN: These accounts of bribery makes my job as an advocate very, very hard because I work diligently to help restore folks’ confidence in government.

TAYA GRAHAM: An ongoing effort to fight the influence of money on an unequal system of justice that leads to profiting off poverty through courts, cops, and corrupt politicians.

DIANA MORRIS: So we really hope that legislators will step up and not be involved with the bail bondsmen lobby. It’s been shown now to be corrupt, it has a very narrow interest, and it really does not meet the interests of the public. And it’s costly.

TAYA GRAHAM: This is Taya Graham and Stephen Janis for The Real News Network in Annapolis, Maryland.