Bilal Ahmed of Souciant.com says accusations of religious degeneracy and charges of heresy are at the heart of the executions, for they advance and protect the national narrative of Wahhabism

Bilal Ahmed of Souciant.com says accusations of religious degeneracy and charges of heresy are at the heart of the executions, for they advance and protect the national narrative of Wahhabism 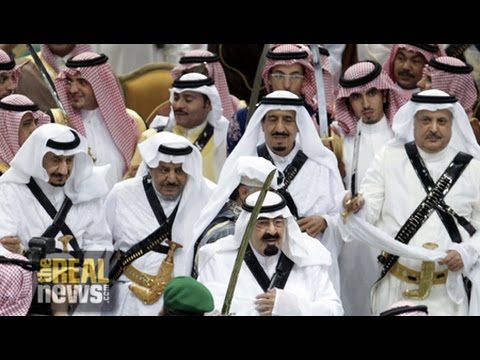 The execution of 47 people in Saudi Arabia last week continues to spawn much outrage for its brutality. Even the editorial board of the New York Times took aim at the Saudis, with an editorial titled Saudi Arabia’s Barbaric Executions. And protests against the Saudi execution of the cleric Nimr al-Nimr continue throughout the world this week. The brutality of these type of executions and other forms of punishment, such as public floggings of women and beheadings, it is important to understand their purpose, says our next guest.

In Souciant.com, Bilal Ahmed wrote: lashes and beheadings are visceral and [glory] rituals. They are visibly bloody and continue largely because of the theatrical effect. King Salman wants reformists like Nimr or al-Qaeda, drug smugglers, bloggers, and accused witches to all be instinctively linked with religious weaknesses and moral degeneracy, as if they are threats to the religious Sunni citizen. Now with us to discuss all of this is Bilal Ahmed. Thank you so much for joining us, Bilal.

BILAL AHMED: Thanks for having me.

PERIES: So Bilal, what did you mean by that paragraph?

AHMED: Well, what I meant is that Saudi Arabia, since the beginning of the Arab Spring, has attempted to jostle itself in a reactive position, and that’s in order to stymie efforts by grassroots activists and by protesters, by civil society organizations and by their international allies, to press for democracy within Saudi Arabia and to press for democracy in other countries in the region that will endanger its investments and endanger its strategic interests. That’s true for the other Gulf monarchies. And this execution plays a role in setting the standards for a national narrative that will support that.

AHMED: Well, it supports that because it gives the ideal model of the citizen, which is this ideal Sunni religious citizen that is productive on the labor market in Saudi Arabia, it gives this ideal model of the citizen a list of people to hate for their moral degeneracy. It reinforces their degeneracy by giving imagery of them being executed, because the executions and the bloody way in which the executions take place reinforce the national narrative of them as degenerates. And then from there it simply presses them to play their role in the machine that is the national functioning of Saudi Arabia without a democratic government, and simply presses on them this vicious rhetoric of an underclass. And that’s really the point, here, that these various segments of the population that have superficially no relation to each other are unified in the fact that they are being seen as an underclass. And they are also being seen in some respects as threats to the governing structure itself.

PERIES: So in essence, if you support these people that are calling for greater democracy and a freer society and so on, you yourself is associating with this underclass and degeneracy of your true faith. And that is useful for the national narrative because?

AHMED: It’s useful for the national narrative because it creates a situation where even if you’re a more reformist figure, or even if you are simply working in a civil society organization, you have now been now been associated with other elements of this underclass, such as drug smugglers and such as members of these terrorist outfits. And as a result, the national narrative is allied against you as equivalent to those other elements of the underclass. So you’re also privy to the same violence as them, and you’re also discredited in much the same manner as them.

PERIES: Now, Bilal, this works, perhaps, in order to keep the house of Saud and the royals intact, and those who are immediately in their circle of the ruling class, and retain their status in the country. But this is not working out very well for them in the national and international scene. Explain that.

AHMED: Well, I’m not actually sure that it’s not working very well for them. I think that the plan is actually going relatively smoothly, all things considered. We have to remember that the Gulf monarchies did not seem stable in the slightest during the heyday of the Arab Spring several years ago. They have now survived a rather large torrent of popular protests, and also backed regional allies like General Sisi in Egypt. So their position is arguably stronger than it was several years ago, even if it is still shaky.

But there are international trends that are allied against them, and those are trends that they can’t really control. So you have these attempts to entrench the monarchy in order for to maintain its hold on power. But you don’t have a guarantee that any of those strategies are going to work, because the oil market has now turned against Saudi oil production. And geopolitical trends have now turned against Saudi Arabia being the sole projection, apart from the state of Israel, of American strategic interests.

PERIES: Now, Bilal, you also indicated that the domestic situation, economic situation, austerity measures with the falling oil prices, that the Saudi state is no longer able to provide for the population the way they have in the past, and that somehow these executions and so on is a distraction from mismanagement and inability to provide locally. Give us an indication of how that is transpiring in the country.

AHMED: Well, I think it is partially a distraction. I think that the purpose of the executions first of all was to do what I said before, by establishing an underclass rhetoric around these reformist figures. But it was also to galvanize domestic and regional sectarianism. And the Saudi royal family has always benefited from this rhetoric of sectarianism. It benefits from it in the sense of it being the de facto representative in sectarian rhetoric of the Sunni Muslim world. And it’s very much been supported in its role by the United States and by the United Kingdom and other western powers since the ’50s. So this shouldn’t come as much of a surprise.

So the sectarian rhetoric kicks in, which shores up domestic loyalty, both to the state and to the monarchy, and also provides a convenient scapegoat in not just the state of Iran, but also for projections of the state of Iran in Saudi Arabia itself. And that would be the country Shia minority. And that is where we should be most concerned, because it is very clear that the state of Saudi Arabia is now willing to potentially sacrifice large elements of its Shia minority in order to retain its hold on power by galvanizing an increasingly dangerous sectarian rhetoric.

And there’s often a discourse about Saudi Arabia being as bad as it could possibly be. But that doesn’t take into account the many intricacies of the state itself. And this is actually a posturing that in my opinion has been somewhat unprecedented. They have not moved, that is, the royal family, the royal family has not moved this explicitly against the Shia population before, even though their behaviors have been restricted and they do live under a situation without equal rights. But this is something new.

PERIES: And explain the relationship between the two communities, in terms of the Shia and Sunni communities in Saudi Arabia. And historically, has there been a relationship that has been more congenial?

AHMED: To be Sunni and to be Shia means something radically different now than it did before the modern era began. And that’s accelerated very much into the 20th century. As far as the recent relationship goes, we have to examine the effect of Chicago school economics and neoliberalism, and these types of market-driven state policies that everywhere have selected for some form of majoritarian or xenophobic or hypernationalist sort of political formation. And that the closest way you can see that happening in Saudi Arabia is through anti-Shia rhetoric, and an anti-Shia politics, and an anti-Sufi politics. And a politics that’s basically centered around a militant Sunni Islam that is amenable to the concerns of the marketplace. And that’s my point.

PERIES: And Bilal, the recent changes in the royal family and the leadership of the Saudi government, what does that have to do with the current state of things and the desire, more emboldened desire, to ascend to be the regional dominant power in the Middle East?

AHMED: Well, it is important that King Salman is still relatively new and is still charting his course. I think what he’s attempting to do in a very bold move, you have to give it to him, he’s attempting to, one, refigure the entire basis of the Saudi Arabian economy, and also reassert its role as a regional leader by crushing these democratic revolts and by projecting its interests in neighboring states. And he’s attempting to do both these things at once in order to prove both himself as a ruler, but also prove the continued need for the royal family at the head of Saudi Arabia, if not the existence of Saudi Arabia itself. Because all those things are in question right now.

PERIES: And Bilal, you said something very important. Democratic revolt, what signs are there of that?

AHMED: Well, there have been signs for several years within Saudi Arabia that there is a genuine desire to push for a more substantive democracy. There were protest efforts during the initial wave of revolts in 2011 and 2012. these were met with severe crackdowns.

PERIES: Along with other countries in the Arab Spring.

AHMED: Along with other Arab Spring countries. And there were further attempts to push for popular protest in Saudi Arabia since then. They’ve all been met by severe police crackdowns, in order to prevent any sort of fire from spreading.

However, it does seem that the monarchy recognizes that its existing state of affairs, when it comes to its social compact with its citizens, has to change. One is because it just simply can’t afford it anymore as a result of oil being this low for this long, thanks to American shale hydraulic fracking practices. But another is the fact that it simply recognizes that it needs to surrender some democratic representation.

So you may have heard, this is to your viewers, your viewers may have heard that there were recent elections, and that there were women candidates in some of these elections. This is very much a part of the Saudi Arabia state’s reaction to the Arab Spring. And that’s a point I want to make very clear. Saudi Arabia recognizes that it has to change in the face of growing challenges, and it is attempting to do that. And King Salman is attempting to stake his legacy on his capacity to make Saudi Arabia do that. And it’s an open question whether or not it will work.

PERIES: Well, Bilal, I look forward to unpacking some of those measures in the coming days with you. Thank you so much for joining us today.

Bilal Zenab Ahmed is the associate editor of Souciant.com. He is also a PhD candidate at SOAS, University of London.