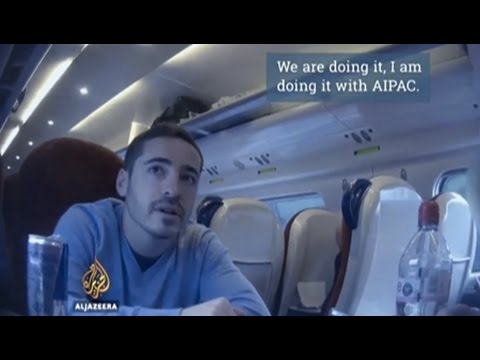 A recently released video from Al Jazeera shows an Israeli diplomat and an aide to a conservative member of the U.K. Parliament discussing plans to take down British politicians deemed hostile to the interests of the State of Israel. Let’s have a quick listen:

SHAI MASOT: Can I give you some MPs that I would suggest you would take down?

MARIA STRIZZOLO: Well, you know… if you look hard enough, I’m sure that there is something that they’re trying to hide. (laughs)

SHAI MASOT: Yeah. I have some MPs.

SHAI MASOT: No, she knows which MPs I want to take down…

MARIA STRIZZOLO: You still want to…?

MARIA STRIZZOLO: You still want to go for it?

SHAI MASOT: No, he’s doing a lot of problems.

MARIA STRIZZOLO: I thought we had, you know, neutralized him just a little bit, no?

SHARMINI PERIES: This video, filmed in October of last year, is a part of a wider, four-part investigation, by Al Jazeera into the Israel lobby in the U.K., which shall be aired over the next few days. The British aide, Maria Strizzolo, at first dismissed the video as “tongue-in-cheek”, but ultimately resigned on Sunday once the footage was posted online.

A Foreign Office spokesperson told Reuters on Sunday that the U.K. has strong relations with Israel, and, “We consider the matter closed as far as this video is concerned.” The Labour Party spokesperson called for an immediate inquiry into the matter, and went on to say, “It is simply not good enough for the Foreign Office to say that the matter is closed. This is a national security issue,” they said. The sentiment was echoed by Foreign Affairs spokesperson for the Scottish Nationalist Party, Alexander Salmond.

Joining us to speak about the Al Jazeera video, and investigation, and the British policy towards Israel and Palestine, is Asa Winstanley. Asa is an investigative journalist, and associate editor at The Electronic Intifada. Thanks for joining us today.

ASA WINSTANLEY: Great to be with you.

SHARMINI PERIES: So, Asa, let’s start with exactly what was revealed in that clip we just saw, and what the investigation Al Jazeera is engaged in. And what’s coming out over the next few days.

ASA WINSTANLEY: Okay, so, an Israeli Embassy agent by the name of Shai Masot was caught on camera by an undercover reporter working for the Al Jazeera investigations unit, discussing with a British civil servant of how to “take down” the Deputy Foreign Minister, Alan Duncan.

Now, Alan Duncan is deemed by Israel to be critical. And he’s not that critical. He’s critical of settlements. He said that what Israel is doing in the West Bank to Palestinians is unjustifiable, so he’s not some sort of radical. This is a conservative government minister – you know, he’s second in the Foreign Office to Boris Johnson, the Foreign Minister.

But here we’ve got someone who presents himself, and who was presented by the embassy as a diplomat. “Senior Political Officer” was his title on his business card, according to The Guardian, and he was presented in that way amongst pro-Israel activists — and amongst pro-Palestinian activists, as well — as someone who was a political person. And yet, we’ve got him here acting in a way to undermine democratic processes in British democracy.

So, questions are going to continue to be asked about this. I think that the British government is not going to be able to hold this line of, “The matter is closed,” and, “We have a good relationship with Israel.” The Israeli Embassy are trying to distance themselves from him. But so far, there hasn’t been any reprimand, despite what the spin doctors are claiming. What that Embassy statement yesterday said was that, after these revelations — they didn’t name him, but it’s clearly referring to Shai Masot — saying that his term of employment will shortly be coming to an end. You know, if it was the agent of any other government, particularly, say, if it was an agent from the Russian Embassy doing a similar sort of thing, you could bet he’d be out of here on the first plane.

SHARMINI PERIES: Asa, this is seriously coming across as if the Israeli government is interfering in the U.K. elections and parliamentarians and their democratic process here. Not unlike what the U.S. is accusing Russia of doing when it comes to the 2016 presidential elections here. Compare the two, and what does Israel have to do with all of this?

ASA WINSTANLEY: Well, I haven’t looked closely at the American intelligence report that was released about supposed Russian interference in the U.S. elections. But from what I’m seen of it, it looks pretty thin to me.

By contrast, there’s pretty clear… I mean, there’s totally clear evidence of Israeli interference in British, not elections, but democratic processes, certainly. Infiltrating itself within the main political parties. Throwing up flak, sabotaging government ministers. These are high levels of government we’re talking about here. Government ministers deemed to be even mildly critical of Israel, putting them on a so-called hit list to get rid of them, to neutralize them.

These are all their words. To try and even… there’s even talk in one of the tapes of engineering, “A little scandal, maybe”. This is what the civil servant who’s in contact with this Israeli Embassy agent proposes, you know, against Alan Duncan. Just something that would, sort of, get him out of the way, and mean that he was not so much a barrier to their policies. These are all things they were hoping for.

SHARMINI PERIES: All right. What do you think Al Jazeera’s objectives were in doing this?

ASA WINSTANLEY: Well, I think Al Jazeera has, over the years, done quite a few investigative reports into Palestine and Israel. The Investigative Unit on the Al Jazeera English side has done things like The Palestine Papers, the assassination of Yasser Arafat, and who was behind it, you know, that Israel was behind it and that there was evidence that he was poisoned and so forth. And throughout all… I know from hearing from those journalists, that throughout all those things, they came under immense flak and attacks from the Israel lobby.

And a lot of journalists who’ve tried to cover Palestine and the Israeli influence within Western democracies always come across time and time again — and it’s the same old accusations all the time — people are falsely accused of being anti-Semites, and this is something that Al Jazeera has encountered, as well. So, they clearly decided to investigate the Israel lobby itself.

SHARMINI PERIES: So Asa, tell us more about what’s coming in the Al Jazeera investigation, in their four-part series.

ASA WINSTANLEY: So, Al Jazeera will be airing this four-part series starting on Sunday, the coming Sunday, for four days in a row. My understanding is that a lot of the focus in the documentary is actually going to be on the Labour Party. Every mainstream political party, in the U.K. have what are called Friends of Israel groups.

These are essentially lobbying organizations which press within the political parties for the interests of Israel. They say it openly, and they do it openly. The issues around it are, the problematic issues of the coming out – so far from what we’ve seen, from the extracts of the documentaries that have been released so far — that these groups are not open about the funding and assistance, and that they receive from the Israeli Embassy. They present themselves as almost grassroots organizations, especially in the case of the Labour Friends of Israel. They say, “No, you know, we just happen to be supporters of Israel within the Labour Party.”

So, what we see here is going beyond… this is moving into the realms of astroturfing. These are not genuine groups of supporters. These are organizations which are set up to sabotage Palestine solidarity in the U.K.

SHARMINI PERIES: Right. Some of the things that are going to be unraveled over the next few programs of Al Jazeera are already out there in terms of the press. How is the U.K. government responding to it? How is the Labour Party responding to it so far?

ASA WINSTANLEY: The response from the government has been sort of, hope it goes away, basically. What they’ve said is, following an apology from Mark Regev, the ambassador to Alan Duncan, they consider the matter closed. So that’s their position.

But there’ve been a lot of senior Conservatives who’ve gone on the record in the press and saying that this is an outrage. Alan Duncan himself hasn’t commented. But Crispin Blunt, another Conservative -– I believe he’s a junior minister –- who is named in the transcripts and in the undercover footage as being a target on that, what they call “the hit list” of MPs that they wanted to get rid of, in their terms, has come out in saying, “There needs to be an investigation.”

The Opposition Labour Party spokesperson, Emily Thornberry, has called for an immediate investigation into, in so many words, a version of British democratic process. And the Scottish National Party has gone even further. And as well as an investigation has called for Masot to be expelled immediately. And I think it will be difficult for the government to hold this line when more of the revelations come out.

In The Mail on Sunday, which is an extremely right-wing, Conservative newspaper, they led yesterday, a big exposé on this, because they were one of their media organizations given the preview of this documentary. And alongside their investigative piece into it, brought in some of the transcripts, they’ve published an op-ed piece by a former minister in David Cameron, the last Conservative Prime Minister’s, government. He says, and I quote, “British foreign policy is in hock to Israeli influence at the heart of our politics, and those in authority have ignored what is going on.”

And it’s bizarre because you can see he’s not named in the article, and there’s this sort of silhouette thing going on here. So he’s sort of afraid, in a way, that he would be the victim of a smear campaign if he came out in the open and said all this. I mean, I think it shows an unhealthy dynamic.

SHARMINI PERIES: All right. Asa, I thank you so much for joining us today. There’s so much more to discuss in terms of the differences with the different parties of the U.K. and their reaction to Israel/Palestine. But let’s save it for another time. Thanks for joining us.

ASA WINSTANLEY: Thanks for having me.

Asa Winstanly is an Investigative Journalist and Associate Editor at The Electronic Intifada.