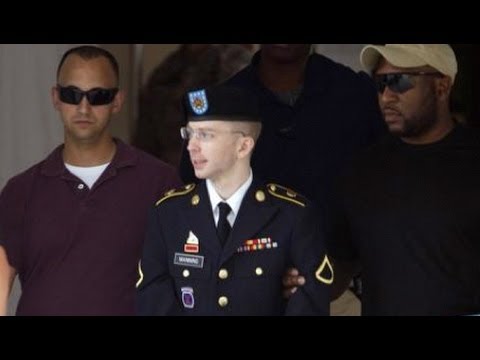 ANN WRIGHT, FMR. U.S. ARMY COLONEL AND STATE DEPARTMENT OFFICIAL: Well, as a retired Army officer, I spent 29 years in the military. I’ve been a part of court-martials before.

I am very distressed about the length of time that Bradley Manning will be serving. I believe that being a whistleblower, even in the military, is appropriate, that it is the responsibility and duty of men and women in our military to blow the whistle when they see that our government and our military are participating, conducting illegal and criminal acts. And that’s what Bradley Manning has done. He’s been a whistleblower for the truth. And I believe the military should look at that and take a lesson from it and prosecute those who actually committed the criminal acts and not Bradley Manning. So I’m very distressed about the length of time that he will be serving, and I hope that we’ll be able to, through citizen activism, put pressure on our government to pardon him.

The original number of years that Bradley could have served apparently was 90 years. The prosecution asked for 60 years.

You know, we don’t know what the government witnesses had said about the harm done to the United States. We have no idea about it, because, again, it’s part of the secrecy of America, and we have not a clue about all of that. And I think that 35 years is a very severe sentence for what he did, which was reveal criminal acts committed by the United States. I think we need to be prosecuting other people who actually committed those criminal acts.

Well, Bradley Manning’s court-martial follows in the line of the draconian war against whistleblowers under the Obama administration, where we have six people who have been charged with espionage for revealing the things that were going on in the government that they felt needed to be cleaned up, that the government was breaking its own regulations by what it was doing. The Obama administration has really come down hard on whistleblowers trying to stop all leaking.

And it’s a part of our life and culture that if we see something that’s wrong, we should be saying something. As the government tells of, if you see something, say something, well, particularly if the government itself is doing something wrong. And that’s what these whistleblowers have been doing, Bradley Manning, who in his own testimony said the reason that he downloaded those materials was because they exposed what the government was doing that he felt was wrong. And when you really look at the acts that were exposed, there are a lot of crimes that were exposed by the download of those documents and giving them to WikiLeaks and then the publication of them through major newspapers throughout the world.

The other whistleblower that perhaps xeroxed and gave to the public the most documents other than Bradley Manning was Daniel Ellsberg. And his case was essentially thrown out of court. He never served a day in jail, because of government malfeasance of government officials breaking into his psychiatrist’s office and stealing records.

The severity of this case, it is the most severe whistleblower sentence that we’ve seen to date, and it is given to have a chilling effect on all others who might be thinking about exposing government malfeasance, government misuse of its own power and resources. So it’s–the sentence, even though it’s not a 60-year sentence, the 35-year sentence is certainly one that the government intends to chill other potential whistleblowers.

Well, it is a very emotional day for all of us. We’ve been with Bradley Manning really for the three years since he exposed the materials through WikiLeaks. And to get to know him through the court revelations and through his lawyer, I think a lot of us feel like we know this kid pretty well, this young man pretty well, and to see him kind of as a friend, because we all are supporting whistleblowers of all kinds.

I myself resigned from the government ten years ago in opposition to the war in Iraq. Although I don’t consider myself a whistleblower, I did in my letter of resignation have a lot of supposition about the lies that we were being told about the war in Iraq.

And for this young man to have gone ahead and knowing full well that he would be in big trouble for what he was doing, for him to go ahead and reveal all these things and then go to prison for them, you know, it’s a day that we all have to look into our own consciences of what can we do to make our world a better place. And some people are willing to risk going to jail to do that, and Bradley Manning is one of them.