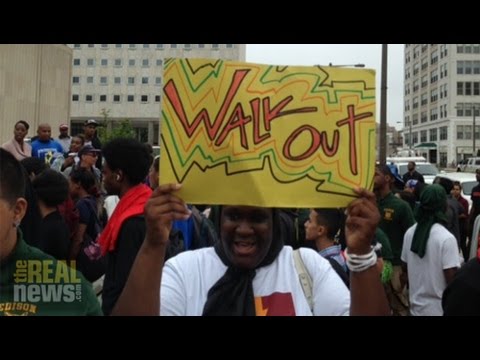 We turn now for a look at the City of Philadelphia’s embattled school system. It’s faced rounds of school closings, layoffs, and cutbacks in recent years. Now the School Reform Commission, the body that controls the school district, has made the unilateral decision to cancel its contract with the Philadelphia Federation of Teachers, forcing union members to contribute to their health care benefits.

Now joining us to discuss this is Anissa Weinraub from Philadelphia. She’s a high school teacher and member of the Caucus of Working Educators, a social justice caucus within the Philadelphia Teachers Union.

ANISSA WEINRAUB, PUBLIC SCHOOL TEACHER, PHILADEPHIA: Hi. Thanks for having me.

NOOR: So start off by just giving us your response to what the School Reform Commission is saying. They’re saying that everyone has to pay, everyone is going to have to chip in because of all the cutbacks that the school district is facing and that the teachers have to do their parts too. Give us your response.

WEINRAUB: Sure. So what we saw on Monday was a real kind of stab at democracy when the School Reform Commission had a last-minute meeting at 9:30 in the morning that lasted all of 17 minutes, in which they unilaterally imposed these changes on us, on the teachers union. So we have been in good-faith negotiations for the last 21 months, kind of working at a status quo on our contracts, and health care was on the table. So instead of continuing with these negotiations and making an actual mutual decision with our members, with our 15,000 person union and the school district, instead they unilaterally imposed.

And so how are they framing it, like you said? They’re saying, we all have to pitch in and do our fair share. And that is the kind of language of the moment, which is this austerity language, which is basically saying, you know, there’s not enough funds, so we have to all pitch in and give back.

However, as a working educator myself and a resident in Philadelphia, I know that that is just a complete coverup of real political decisions that have happened over the course of the last two years, five years, ten years, but specifically within this Corbett administration, where our governor has cut over $1 billion to public education.

And so we’ve started to face this kind of financial crisis because of decisions, political decisions that he made to prioritize things other than public education. So we see those kind of cuts from the state. We’ve seen major revenue that isn’t coming in from the city through major downtown developers’ tax abatements, through our elite private medical and educational institutions not paying their fair share of taxes. And so, to put this on the workers and the school who are working every day with our kids and to say that we as workers are a revenue source for our schools is just–it’s ridiculous. And so we as the working educators did not cause this financial crisis, and neither will we be a revenue source to fund our schools. We’re looking for a full funding formula that would create sustainable funding for our schools.

NOOR: And as you mentioned, these kind of cutbacks that have been happening for years. Every time it happens, there seems to be a outpouring of opposition from the students and the teachers in the community in Philadelphia. There was just a walkout today, where hundreds of students walked out in solidarity with the teachers. What can you tell us about that?

WEINRAUB: Well, we saw it go on social media last night that our young people understand and they can put things together where they see that they love their teachers and that they want to keep high-quality teachers in their lives. So they’re going to stand in solidarity with us, their teachers, and say–and they understand that we need to keep our morale up and we need to be treated as the professionals that we are and not have this kind of underhanded, [insulting (?)] policies being made by the /əˌsoʊsiəˈdɛnsə/.

So this morning we saw hundreds of students walk out of their schools and stand out in front of their schools, two notable schools, one which is just a block away from where I work, in which they had, like, a marching band outside and they were saying–you know, they were like, will you stand with our teachers? Our teachers are important to us. And then another school across town that really was saying education is the most important thing for them and that their teachers are a part of it.

NOOR: And what is the response of the teachers and community going to be long-term to fight not only this move by the School Reform Commission, but this whole austerity policy that’s been happening in Philadelphia for over a decade now?

WEINRAUB: Yeah. So, technically, at this moment, because what the School Reform Commission did is illegal–to impose on our contract in this way when we’re under negotiations. So what they did is illegal. So I know that as a union we’re taking it to the courts. So that’s going to be happening.

But I think at the same time we as union members are all really–we’ve seen, as you mentioned, the kinds of corporate neoliberal reform that have been passed down here in Philadelphia–major school closings, huge layoffs of thousands of our colleagues. And so we’ve seen all these reforms be put in, and we recognize that now we’ve kind of reached the tipping point. And so we understand that these corporate reforms and this kind of full-scale move towards privatizing our schools isn’t good for our kids, isn’t good for reaching their academic and social and emotional needs, and we know it’s not good for our communities, because it’s very destabilizing. So I think what we’ve seen is that now more than ever, teachers, with our students and their parents and the community members, are absolutely coming together to say public education is important, our young people have a right to it, and it’s a failure in the deepest way of the leaders at our city and our state level, and we’re working on an electoral strategy to get folks out and get people who prioritize our young people in. So absolutely we’ve reached a tipping point in Philadelphia.

NOOR: Well, we know in a lot of ways that Philadelphia has been the ground zero for these type of neoliberal reforms and cutbacks. So we’ll certainly keep following this story. Thank you so much for joining us.

Anissa Weinraub is a 9th-year high school teacher in the Philadelphia public schools. She is a founder of the Teacher Action Group Philadelphia, as well as a steering committee member of the Caucus of Working Educators, a social justice caucus within the Philadelphia Federation of Teachers. She believes that the tipping point has been reached…