Anti-fracking activists have joined the local community in Lancashire for a 'rolling resistance' month of direct action protests, after the UK government overruled the local government's ban on fracking

Anti-fracking activists have joined the local community in Lancashire for a 'rolling resistance' month of direct action protests, after the UK government overruled the local government's ban on fracking 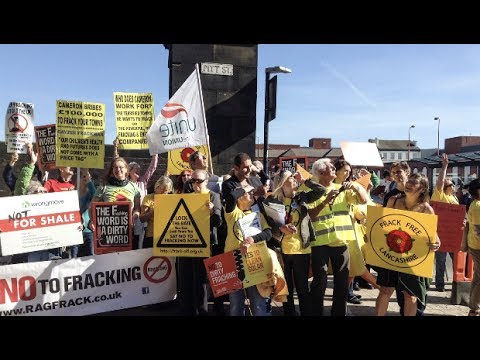 SHARMINI PERIES: It’s The Real News Network. I’m Sharmini Peries coming to you from Baltimore. Anti-fracking campaigners in northwest of England are on a rolling resistance campaign. There are a series of actions that are taking place at the first designated fracking site in the UK at Preston New Road in Lancashire. Local residents say, “They have been left with no choice following the UK government’s decision to overrule the local government’s ban on fracking.” Non-violent direct actions are being organized by Reclaim the Power, a direct action network fighting for social, environmental, and economic justice. Joining us today to discuss the nature of the struggle is Anna Vickerstaf. Anna is a climate activist based in Leeds UK. She’s a part of the national direct action group, Reclaim the Power. Thanks for joining us Anna.

ANNA VICKERSTAF: Thanks for having me.

SHARMINI PERIES: Anna, this is a real struggle of people versus corporation, a struggle that is facilitated by the state on behalf of the corporation. A struggle like this was going on in the first people’s at Standing Rock in North Dakota and I understand some of them are with you there today, Friday. Now, this kind of fight back is a local government’s decision to ban fracking has been overruled by the national, federal state of the UK. Give us a sense of what the struggle is about, and what has actually taken place, and what these protestors are about.

ANNA VICKERSTAF: Yeah, absolutely. Yeah. I’m up here in Lancashire in the northwest of the UK at the moment. The local community here are absolutely amazing and they have resisted the fracking industry for the past six years. The local and county councils, it’s like the local governments, rejected applications from the corporations to frack here based on concerns about health, concerns about noise pollution, the industrialization of the landscape, and also climate concerns. Then the central UK government overturned that decision in October, which has meant that people from across this place for the first time ever are stepping up to take direct action. They’ve set up protection camps and they’re having to literally put their bodies on the line to show that this decision wasn’t theirs and that this … Their government has ignored their voices, it’s ignored democracy, and it’s violating what these local communities want in the kind of way of facilitating and protecting corporate greed and a short term solution. It’s not even a solution to the energy crisis.

SHARMINI PERIES: Anna, I understand that there are representatives from Standing Rock with you there. Give us a sense of what’s happening with them and what this collaboration is all about.

ANNA VICKERSTAF: Yeah. As I said, the local communities here have absolutely been leading the resistance for the past six years. When work started to develop the site in January, the local communities were the first people to do direct actions. They were the first people to do kind of blockades in the road and to do lock-ons. Reclaim the Power as a network looks to take national climate activists and experienced campaigners to support those frontline struggles, bringing in skills, bringing in creativity, and bringing in extra bodies to support that and show that, at least local struggle is reflected in a national opposition for fracking, and a national rejection of fossil fuels, and demand for renewables. Yeah, as you said today, we also had a visitor from Standing Rock who’s come to speak with us, to share solidarity, and to share support, and stories from their experiences in America, and to stand with us and say that, “We’re doing the right thing and we’re going to win this fight. It’s just going to be a long fight.”

SHARMINI PERIES: Why has there been such an immense opposition to fracking in the UK? What are the concerns that people are having on the ground?

ANNA VICKERSTAF: There’s a huge opposition to fracking in the UK for a variety of reasons. There’s a whole list that you could choose from. For some local people it’s very much about noise pollution, about air pollution, about industrialization of the landscape. It has concerns about public health, concerns about contamination of the water. For me and for lots of people that are here, it’s very much about the impacts of climate change. We know that fracking is unnecessary. It’s not a necessary industry to pursue. Also, that any attempts to create a fracking industry in the UK would completely dismiss any hope we have of sticking to the Paris Agreement and staying below 1.5 degrees. It’s also massively going to exacerbate climate change in a way that effects climate justice. That means that people around the world who are having the least impact on global warming are going to be the most effected in terms of flooding, and displacement, and they’ll be even more climate refugees if we allow this industry to go ahead.

SHARMINI PERIES: All right. Now, back in April we interviewed Kevin Blow and he’s with the network of police, monitors, net poll, and he told us the real news here, that the police have been intensifying their pressure on anti-fracking campaigners. We saw some footage that was very intense. Police officers pushing back campaigners, protesters, and the struggle was very tense. Give us a sense of whether that kind of friction still exists and has it eased up or is it continuing?

ANNA VICKERSTAF: Over the last few weeks we’ve seen an increased presence of police at the site. They’re police from different forces around the UK that have come together to increase the numbers. The policing at the site’s gone up to 24 hours. What we’ve experienced as a group, and as campaigners, and so have the local community, is violence from security of the site and then inaction from police to follow through on what it is the security’s been doing. On occasions, the police have been violent to local campaigners, but we’ve found that for the majority it’s actually the violence from the security of the company and police in action, even when they’ve been there to witness what’s been going on.

SHARMINI PERIES: All right. Anna, tell us what your plans are now with this kind of intensity, police presence, growing momentum on the part of the protestors. What can we expect over the next few weeks and months?

ANNA VICKERSTAF: Over the next month, Reclaim the Power will be here with the local communities. More and more people from across the UK are gathering. We refuse to be intimidated by security and police violence. We will not let that undermine the fact that people around the UK and the communities here are fundamentally against fracking. We won’t be intimidated and over the next two weeks you can expect lots more resistance in the terms of creative, disruptive actions, and also family-friendly mass demos where people can come together and celebrate the love they have for each other, the love they have for the UK, and make sure that we’re demanding a safer, fairer future for everyone.

SHARMINI PERIES: All right. Anna, I thank you so much for joining us. We’ll be following this resistance that you are organizing and we’ll make sure that at The Real News, we’re one of the few outlets that will be with you along the way. Thank you so much.

Anna Vickerstaff is a climate activist based in Leeds, UK. She is part of national direct action group Reclaim the Power, which uses creative, non-violent resistance to support communities battling fossil fuel extraction and fight for social, economic and climate justice.