Historian Yuval Noah Harari's work shows how to interpret the COVID-19 crisis as part of the global struggle between liberal elites and the rising populist right.

Historian Yuval Noah Harari's work shows how to interpret the COVID-19 crisis as part of the global struggle between liberal elites and the rising populist right. 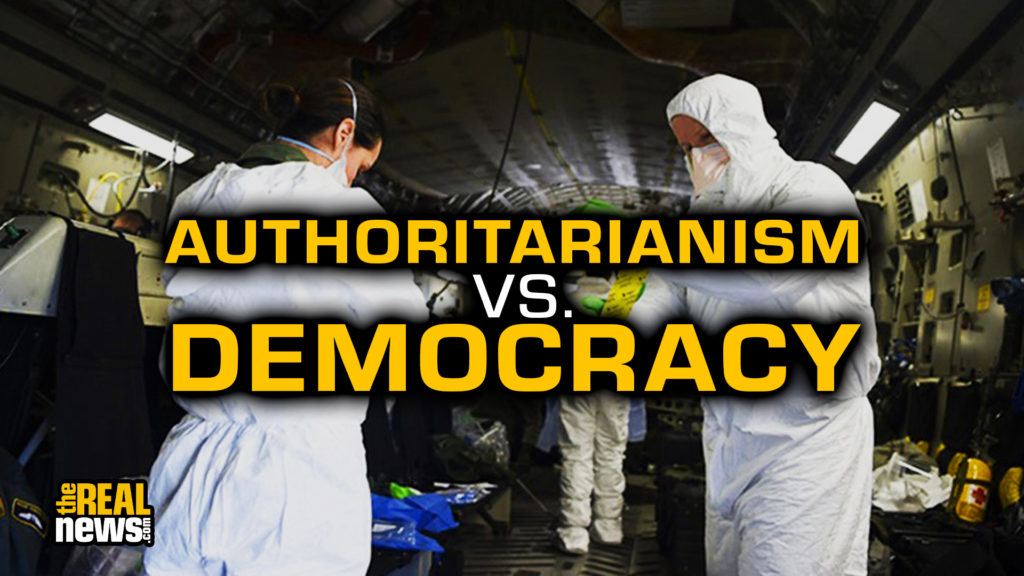 Taya Graham: The COVID-19 pandemic is, among other things, a political crisis. Governments enjoy more power during emergencies than in any other time, because people agree to surrender some of their rights and liberties in exchange for a sense that someone is taking charge and providing them safety from the disaster.

Donald Trump: Unleash the full power of the federal government that this effort today I am officially declaring a national emergency. Two very big words. Yeah, no, I don’t take responsibility at all because we were given a set of circumstances and we were given rules, regulations and specifications from a different time, wasn’t meant for this kind of an event with the kind of numbers that we’re talking about.

Taya Graham: The work of historian Yuval Noah Harari looks for major themes that summarize all of humanity’s history and help predict its future. His popularity in the media is currently soaring, in part because of his predictive statements he made in his book, Homo Deus: A Brief History of Tomorrow, about the effect a pandemic could have on the social fabric. He said this in an interview with The WorldPost.

Yuval Noah Hara…: Today, you have hundreds of millions of people around the world who have no healthcare at all, or almost no health care, and they don’t have a doctor to diagnose a disease and to recommend treatment and so forth. Within a very short time, you can have a much better AI doctor on your smart phone somewhere in a village in Colombia or in Congo, than the president of the U.S. has today from human doctors. I think the big battle in this regard, in the 21st century, will be between privacy and health, and health will win. Most people will be willing to give up the privacy in exchange for much better healthcare based on 24 hours monitoring of what’s happening inside their bodies.

Taya Graham: Yuval Noah Harari uses these interviews to issue a warning, echoing the famous Benjamin Franklin quote about trading liberty for security. He warns that to fight the coronavirus pandemic or to manage any emergency, there is a democratic path and an authoritarian path. And if people allow their governments to take the authoritarian path, it won’t be easy to go back.

Yuval Noah Hara…: That’s the danger, it could last long after this emergency because there is always a new emergency on the horizon. New surveillance technologies that are now deployed just to deal with this coronavirus outbreak, when it’s over, some governments may say yes, but there is a second wave of corona coming, so we have be prepared, and there is Ebola and there is also regular flu. Why not protect people against that too, with this new surveillance system? So the tendency would be to prolong it indefinitely, and in this way the coronavirus epidemic could be a watershed event in the history of surveillance. It’s the moment when mass systems of surveillance are established.

Taya Graham: Harari is not impartial. He identifies himself clearly with a certain political group. Although he is Israeli, he glorifies the leadership of the United States during the economic crisis of 2008 and the Ebola crisis of 2014th, both responses under a Democratic president. It’s not surprising that both Barack Obama and Hillary Clinton are big fans of Harari’s work.

Barack Obama: The other book that I really enjoyed, a book by an Israeli author, Yuval Harari, called Sapiens, and it’s a sweeping history of the human race from 40,000 feet. And part of what makes it so interesting and provocative is that because it’s such a condensed sweeping history, it talks about some core things that and allowed us to build this extraordinary civilization that we take for granted, but weren’t a given, and gives you a sense of perspective.

Yuval Noah Hara…: There is no global leadership. United States, which served as the global leader during the Ebola epidemic of 2014 and during the 2008 financial crisis, it’s basically abdicated its job as global leader. He made very clear to the world that the U.S. is no longer leader of the world, it cares basically just about itself.

Taya Graham: At the heart of Harari’s philosophy is the idea that humanity’s power over nature stems from the ability of humans to cooperate better than any other species on earth, certainly better than viruses. And that cooperation can be based on any unifying idea, like a religious faith or common interest. His theory can apply to political ideology and the global struggle between an increasingly disgraced liberal elite and right wing populous movements. Harari’s definition of liberalism is essentially the cooperation around a belief in science and truth. Scientists drew the conclusion that terrible sacrifices must be made in order to prevent a climate catastrophe. For people, generally liberals, who accepted the importance of that data, it meant cooperating with each other for immediate, drastic change. But not everyone prioritizes the data. People chose to abandon science and that’s when we saw the rise of populist right-wing governments in places like Brazil, Britain, Hungary, India, and the United States. Here is what Harari told the BBC.

Yuval Noah Hara…: Your trust in your government is very important. If you live in a country where, for years, for decades, the government has abused the trust of the citizens, then this is the payday. This is when the citizens don’t believe the government and maybe they shouldn’t. And it’s the same also on the global level. We need today, leaders on a global level, and if for years we have been eroding trust internationally, then today is payday. Today, we need this trust and it’s gone.

Taya Graham: And truth is in short supply in countries with right wing populous governments. Under Harari’s theory, liberalism holds a high standard for facts and data. Ideologies without that standard have an advantage in that they can use misinformation to persuade people to act a certain way, or argue for increased government powers without having to acknowledge a set of objective facts. But spreading misinformation in a pandemic has immediate consequences. William Wan and Aaron Blake wrote in The Washington Post how misinformation forces scientists to incorporate intentional false reporting of COVID-19 infections, or concealing the true data in their models of the spread of the novel coronavirus. University of Washington professor, Carl T. Bergstrom, warned that misinformation affects people’s behavior in a way that makes it more difficult to control the spread of the disease. Dylan Rodriguez, professor at Riverside University, spoke to the real news about how misinformation on COVID-19 fuels racism.

Dylan Rodriguez: So when thinking about these particular forms of anti-Asian racism, that of course the White House is amplifying on a daily basis through press conferences, through Twitter and everything else, what we, I think, have to understand is that these particular forms of racism are actually constitutive. They are foundational to every day normalized white supremacists, thought racist, thought and culture in the U.S., including and especially in the halls of the federal government and the White House.

Taya Graham: Harari knows that COVID-19 isn’t going to destroy the human race, but it is laying waste to the already weakened bastions of democracy, human rights and privacy that Progressives have fought for. He describes under the skin surveillance, a dystopia in which governments track not only what people write and say, but also how they feel. His dystopia is rapidly becoming reality, as certain countries, first among them, Israel, established surveillance of their population’s vital signs.

Yuval Noah Hara…: We are talking about a system of monitoring an entire population all the time, for biometric signals, allegedly in order to protect people from future epidemics. But this can also form the basis of an extreme totalitarian regime. When technology’s not terministic, you can build very different societies with the same technology, just as you could use trains and electricity and radio to build communist dictatorships or fascist regimes or liberal democracies in the 20th century.

Yuval Noah Hara…: So, also in the 21st century, you can use AI in biotechnology to build paradise or hell, it’s up to us.

The pandemic is reshaping our sex lives. Is cybersex our future?

Terror in trailer jail: every single prisoner infected with COVID-19