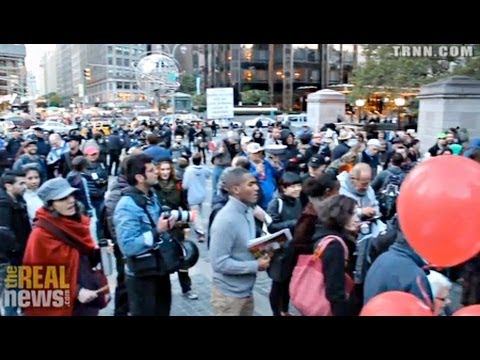 JN: IN NEW YORK CITY, OCCUPY ACTIVISTS GATHERED AT COLUMBUS CIRCLE, A POPULAR TOURIST DESTINATION LOCATED AT THE SOUTH WEST CORNER OF CENTRAL PARK AND IN ONE OF THE WEALTHIEST ZIPCODES IN THE COUNTRY. PARTICIPANTS HELD GENERAL ASSEMBLIES TO DISCUSS INCREASING ECONOMIC INEQUALITY DUE TO FORECLOSURES AND RISING STUDENT AND CONSUMER DEBT

Take Back the Land Movement

â€œWhat we have in this country is a value system called the American Dream, and so many of us have bought into this American Dream. And we are stifled by it. Banks take control of this country, and get us in a situation where we pay pay pay, and get nothing back in return. Government is cutting services, cutting monies, and we are suffering because of it.â€

JN: ACTIVISTS ALSO CREATED A GIANT BOULDER MADE OUT OF CLOTH AND FILLED WITH INFLATED BALLOONS. DOMINIC RYAN SAID IT SYMBOLIZES THE CRUSHING LEVEL OF DEBT MANY FACE

â€œThis boulder is intended to remind people of the Greek myth of Sisyphus, who was doomed to an eternity in hell forced to push a boulder up the mountain, and once he gets to the top it falls back down and he has to push it up again. So our debts that will never be able to pay off its like that burden. So if you look closely at the boulder, weâ€™ve had people write all over it, theyâ€™ll write how much they owe, how long they think its going to take for them to pay it off their debt, if they think they are going to be able to, for many cases its forever, or just a message to their bank or their creditors its sort of a group therapy, people can look at it and see they are not alone, this isnâ€™t just a individual problem this is a problem that is systemic.â€

JN: DEMONSTRATORS IN NEW YORKâ€™S PROTEST, LIKE OTHERS IN CITIES AROUND THE WORLD, BROUGHT POTS, PANS AND UTENSILS WHICH THEY USED TO MAKE NOISE AND DRAW ATTENTION TO THEIR DEMANDS. OUTSIDE THE LUXURY APARTMENTS LOCATED AT 15 CENTRAL PARK WEST, PROTESTERS TARGETED GOLDMAN SACHS CEO LLOYD BLANKFEIN.

JN: BLANKFEIN DID NOT MAKE AN APPEARANCE, BUT ACTIVISTS CARRIED OUT A MIC CHECK TO EMPHASIZE THE ROLE BLANKFEIN AND GOLDMAN SACHS PLAYED IN THE ECONOMIC CRISIS OF 2008 BY SELLING CONSUMERS RISKY MORTGAGE ASSETS, BETTING AGAINST THEM, AND THEN PROFITING WHEN THE MARKET COLLAPSED.

MIC CHECK: â€œIt all blew up in 2008, but instead of going to jail, Goldman got bailed out. The government gave them 12 billion in TARP money and a sham investigationâ€

â€œThe significance today, of the global noise day, is how global it is,â€

JN: MARINA SITRIN IS A SCHOLAR AND ACTIVIST WHOâ€™S STUDIED AND TAKEN PART IN MOVEMENTS FIGHTING FOR ECONOMIC JUSTICE ACROSS THE WORLD.

â€œThis has been taking place throughout all of Europe, in Latin America, and also I think significant is this tactic of and banging pots and pans, la caserola, it actually comes from Argentina post economic crisis when the whole economy bottomed out in 2001. And that banging of pots and pans moved to Spain with the Democracia Real, the 15M movement. It then moved to Quebec with the students movement and its moving throughout the US and today all around the world, so we see how actually global we really are, even in the tactics weâ€™re choosing.â€

JN: SOME, INCLUDING LOUIS MAZZEI, JOINED TO GAIN SUPPORT FOR A PLANNED PROTEST AT TODAYâ€™S PRESIDENTIAL DEBATE, WHICH IS BEING HELD IN LONG ISLAND.

â€œMy comrades in Long Island, and Occupy Wall Street, we put together something we call Occupy the Debate, weâ€™re going to march as close as we can get around Hofstra University, and this is something we are doing because we believe weâ€™re misrepresented if weâ€™re represented at all. So we donâ€™t support any political parties and weâ€™re there to protest the fact that our voices arenâ€™t heard.â€

JN: ACTIVISTS CONTINUED MARCHING AND BANGING POTS AND PANS AT VARIOUS TARGETS IN THE CITY THROUGHOUT THE NIGHT.

REPORTING FOR FSRN AND THE REAL NEWS, THIS IS JAISAL NOOR IN NEW YORK