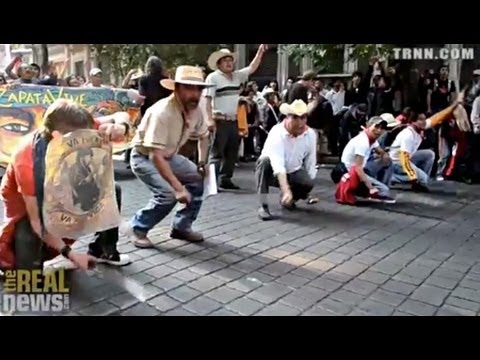 ANDALUSIA KNOLL, TRNN PRODUCER: In 2001, the Mexican government wanted to build an international airport on communal land in San Salvador Atenco, a farming community outside Mexico City. The people of the town resisted this privatization plan and were successful in preventing their displacement from their land.

But this victory came with the heavy price of government repression. In 2006, against the People’s Front in Defense of the Land, who led the resistance. Seven years later, hundreds of people gathered to protest on the anniversary of the police operation.

CESAR DE VALLE RAMIREZ, PEOPLE’S FRONT IN DEFENSE OF THE LAND (SUBTITLED TRANSL.): This day we commemorate the seven years since the repression and the incursion of the federal police into our communities in San Salvador Atenco. For us this day is important especially concerning solidarity.

KNOLL: When flower vendors in the neighboring town of Texcoco were prohibited from selling their wares in a public plaza, they reached out to the People’s Front in Defense of the Land to join them in protest. Enrique Peña Nieto, former governor of Mexico State and current president of Mexico, ordered thousands of local state and federal police to enter the town and break up the protest. During the police operation, officers killed two unarmed students, sexually tortured over 40 women, arrested hundreds of protesters, and incarcerated the supposed leaders for four years. Cesar de Valle was incarcerated for close to two years, and his father, Ignacio de Valle, was sentenced to 113 years but freed after four.

DE VALLE RAMIREZ: After four years our comrades were freed. But even though they are free, there is still not justice. Who will return Alberto Cortes to his family? Who will return Alexis Benhumea to his family, who was also killed on May 4 by a tear gas canister? Who will bring back tranquility to all the families, or the absence of their family members while they were prisoners, their sons, their brothers, their husbands, their friends? Who? There has to be justice for our compañeras who were raped. Who has brought justice to this? Who was the intellectual author of all of this? It was Enrique Peña Nieto, who is now our president.

KNOLL: Recently, the International Commission on Human Rights in D.C. heard the case of the women who were sexually tortured while being transferred to the prison following their arrest at the protest in Atenco. Claudio Hernández says they reject the, quote, friendly solution that the government offered in response to their demand for justice at the international courts.

CLAUDIA HERNÁNDEZ, DEFENDANT IN SEXUAL TORTURE CASE (SUBTITLED TRANSL.): For us a friendly solution is not a possibility. I can’t even imagine it. They accused us of being liars and said we were kidnappers and that we participated in organized crime and that we had violated the whole community. We will not allow this to be forgotten. Most importantly, we fight so this will never be repeated, so what happened to us never happens again. There is now evidence on an international level that here in Mexico they violate human rights and that this is systematic. The policy of the state is to repress all social movements.

Eva Palma is the wife of Kuy Kuykendall, who was severely injured after being struck in the head by a projectile during the protest. Palma says the government responds to people’s dissent in Atenco and the recent inauguration. It’s standard behavior for the PRI, the party that has ruled Mexico for over 70 years.

EVA PALMA, WIFE OF KUY KUYKENDALL (SUBTITLED TRANSL.): We know that the history of the PRI (Institutional Revolutionary Party) is a history of repression. Since ’68 [student massacre] and before, there has always been repression on behalf of the PRI Party. Peña Nieto is just a puppet who takes orders from the International Monetary Fund. This is how he started his six-year term. Just imagine what we’re expecting in the future. When he was inaugurated, the people didn’t have the freedom to say that they weren’t in agreement, because there was so much repression. We started off badly with this assassin. What can I say to you? The projectile that they fired at my husband left him completely handicapped. He can’t talk, he doesn’t recognize people; he can only move half of his body.

KNOLL: While demanding justice for all who suffered violence at the hands of the police, protesters also emphasized their struggle to defend their communal farmland in San Salvador Atenco. Twelve years after they successfully blocked construction of the airport, the government has announced that they want to build a, quote, future city that would include the originally proposed airport in the same territory.

Hortensia Ramos has been organizing against the projet, and says that they as an indigenous and campesino rural farmer community want development and progress, but not at the expense of their land.

HORTENSIA RAMOS, PEOPLE’S FRONT IN DEFENSE OF THE LAND (SUBTITLED TRANSL.): The “future city” signifies the dispossession of our communities. This will delineate a strip, creating a belt of poverty, with one side full of ostentatious buildings, with well-constructed apartments, Santa-Fe style, a university, and green areas. Right on the other side will be the dispossessed communities from basic services and, most importantly, potable water, and yanked from our roots.

KNOLL: In the coming months, the Inter-American Commission on Human Rights will make a decision on the case of the women sexually tortured in Atenco. The People’s Front in Defense of the Land, along with their allies, say they will continue to fight against the future city and dispossession of their community resources.

Andalusia Knoll is a multimedia journalist and educator hailing from NYC, residing in Mexico City where she reports about immigration and Mexican social movements. She is a frequent contributor to Free Speech Radio News, Toward Freedom, and her work has been featured on Democracy Now! teleSUR truthout and various independent media outlets.