Journalist Amber Stearns says Pence has close ties to Koch brothers-backed ALEC, enjoys popularity among Christian evangelical voters and Tea Party types, and is a friend of the coal industry

Journalist Amber Stearns says Pence has close ties to Koch brothers-backed ALEC, enjoys popularity among Christian evangelical voters and Tea Party types, and is a friend of the coal industry 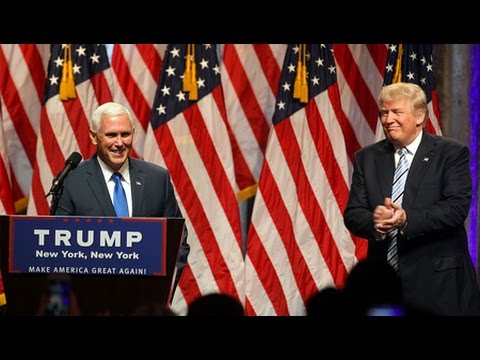 Governor Mike Pence, Donald Trump’s choice for Vice President, and running mate. But who is he and what is he leaving behind in Indiana?

To discuss the new Vice Presidential pick, I’m joined by Amber Stearns. She’s the Journalist and News Editor at Nuvo, an alternative weekly newspaper serving central Indiana. Thank you so much for joining us Amber.

AMBER STEARNS: Thank you for having me.

PERIES: So Amber, give us a rundown. Who is he? And your current sitting governor and now Vice Presidential candidate for Donald Trump.

STEARNS: Well he is an Indiana native. Born and raised here in Indiana. Went to college here in Indiana and he best describes himself. He calls himself a Christian first then a conservative, then a Republican. And when you look at his Congressional record as well as the issues that he’s championed as governor here in Indiana, the Christian conservative really comes through. He started tackling social issues right off the bat even though his predecessor former Governor Mitch Daniels whose now President of Purdue University, shied away from all of the social issues saying we had better things to worry about in Indiana. Mike Pence picked up the flag of social issues and has carried it for the last 3 years at least and it didn’t look like he was going to stop until suddenly he became Donald Trump’s Vice Presidential pick.

PERIES: And who supports him politically thus far as governor not to mention who’s going to be supporting him in the run up to Vice President.

STEARNS: He is very strong among the Evangelical Christian voting population. That was one of the things that struck me as why he made sense for being Donald Trump’s Vice Presidential pick because he could really secure that part of the base that Trump had been kind of weak in. Here in Indiana in our primary he actually endorsed Ted Cruz. He didn’t say anything negative about Donald Trump at all.

He said he had met with all of the presidential nominees and he had spoke very highly of all three at the time because John Kasich technically was still in the race even though he didn’t have a snowball’s chance. But he never said anything negative about Donald Trump. But the fact that he endorsed Ted Cruz really showed where his thinking and his alignment was.

He’s very strong among the Evangelical Christians. Here in Indiana we have a strong population. That’s a very broad base. And the Tea Party, he’s never officially associated himself with the Tea Party but he’s always spoken complimentary of their positions, of the things that they champion. So even though he doesn’t call himself a Tea Party Republican, he does lean toward that base. So he pulls in that group as well.

PERIES: Now before Indiana he served in Washington and he was closely affiliated with ALEC which is the Koch Brothers funded initiative. Tell us more about his prior record here.

STEARNS: His connection to ALEC is actually very strong. In fact, he had considered or at least that was the rumor–he had considered jumping into the fray for the Republican primary for president. He didn’t have his eyes set on the White House but he had a few problems here at home. In the process of setting that up he actually had allowed, shall we say, a few of his personal staffers to become staffers with Koch industries along with ALEC.

ALEC is having their annual conference here in Indiana in just a couple of weeks and he was scheduled to give at least one if not two speeches during their conference here. He’s been noted to attend various functions for ALEC/ He’s been noted to be good friends with the Koch brothers. So the fact that he also brings in that faction as well again made it no surprise that he was the Vice Presidential pick.

PERIES: Now early on there was some rumors that the Koch brothers would rather support Hillary Clinton that Donald Trump. Does this change that configuration?

STEARNS: I think it gives them something to think about and I think that the Trump campaign is hopefully that securing Mike Pence as a Vice Presidential pick will bring in that group back into the fold. Mike Pence has been called a Republican’s Republican. He is 100% a diehard as far as the party’s concerned. So I think there’s that hope that he will bring in the Koch brothers, he will bring in others like the Bushes for instance, that have been anti-Donald Trump for so long because he is really aligned himself with those groups and those people. So it’s possible.

PERIES: And as you just said he’s a model conservative and he has a record of wanting to slash taxes and has been unilaterally or some–others have benefited from the kinds of moves that he’s made while governing. Give us some examples of what that has been like?

STEARNS: It’s very interesting because he was handed Indiana by the previous governor pretty secure. Mitch Daniels was known as a [bean curd]. He was a numbers guy and budget director for Ronald Reagan. So he really kind of led the states through the recession, cut budgets in every department you could possibly imagine. From education, to transportation, infrastructure, you name it their budgets were minimized. Mike Pence continued that to help build his reputation of cutting taxes, cutting government spending here locally, again so he could build that resume of executive power. And it seemed to do well for the first year. Indiana was able to turn its economy around.

He’s brought in several jobs over the last couple of years but the caveat to that is that they’re low paying jobs. Indiana’s net value, as it were, has not increased. It’s kind of been stagnant since the recession because the jobs that have been brought in, haven’t been high paying jobs. But–and then on the flipside, some of the areas that he cut, it’s been criticized that they were cut too much.

We’ve had some infrastructure problems. Bridges that had been slated for repair were actually put on the backburner in order to accommodate those cuts and then we had a bridge collapse and causing major artery that connects Indianapolis to Chicago had to shut down in order for that bridge to be repaired. So then the state legislature had to quickly fix those types of things. So it’s been kind of a double edge sword where’ he’s been kind of able to show that he’s been able to stabilize Indiana’s economy but there’s been some side effects to that.

PERIES: And finally Amber, now Pence is publicly known as an adamant climate change denier. Is this reflected in policy in Indiana and what can we look forward to in terms of his Vice Presidency?

STEARN: It is very much reflective in his governorship. Let me tell you that he is a friend of coal. He was one of the governors who signed a letter requesting President Obama to reconsider the EPA’s Clean Power Plan. We’ve had a lot activity as far as protest and people really trying to get the legislature’s attention for more solar power support, for more cleaner energy to have some of our coal plants shut down. It was just a matter of–it was a matter of economics and slightly politics.

But the last remaining urban coal burning power plant here in Indianapolis–Indianapolis Power and Lights suddenly shifted and closed that down and went to natural gas. But Governor Pence was one who did not want that to happen. Indiana has not as large of a coal industry as say Virginia,–West Virginia. But substantial to the point where he has been very pro coal. It’s been rumored hat climate change is a dirty word in his administration so you won’t necessarily hear it from the state house. That hasn’t been proven but I’m trying to prove it.

PEREIS: And one last question to you given the situation across the country, across the nation, and what’s going on in terms of police-community relations, give us a sense of how he has stood on race relations in the state of Indiana.

STEARNS: Not very well. That has been one social issue he has been relatively silent in. Now he did just days probably hours, maybe 48-72 hours prior to his announcement as announcement to his Vice Presidential pick, he went on a neighborhood walk through our capital city’s most challenged urban areas where there’s been high crime and things of that nature. Our police department has a fairly good reputation so we haven’t had any instances of that nature in a while.

But he did go on a walk with a neighborhood group that has been vigilant in trying to keep crime down. He has never done that in the history of his congressional career. He’s never done that in the history of him being governor of 3 years. But suddenly that happened right before the announcement. Again, something that’s suspect because it wasn’t anything he had in his [wheelhouse].

PERIES: Amber I thank you so much for joining us and I know this is going to be a very important issue in the next couple of days as the Republican Convention is rolling out all of their I guess the dog and pony show at the RNC. And we’ll be back to discuss Governor Pence with you once again. Thanks for joining us today.

STEARNS: Thank you for having me.