Mr. Shallal says at the local level is where you can make a change. It's very hard to expect change on the national level.

Mr. Shallal says at the local level is where you can make a change. It's very hard to expect change on the national level. 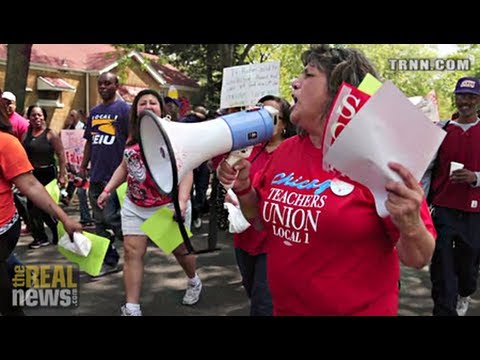 PAUL JAY, SENIOR EDITOR, TRNN: Welcome back to The Real News Network. I’m Paul Jay in Baltimore. And we’re continuing Reality Asserts Itself with Andy Shallal, the owner of Busboys and Poets in D.C.

JAY: So one more time, Andy runs this Busboys and Poets in D.C. It has–it’s the hub of all kinds of progressive politics, a very successful chain of restaurants, I think up to seven in a short while.

Andy’s running for mayor of D.C. And we’ve established a couple of ground rules which–he’s not allowed to critique anyone else running for mayor. He can only talk about his vision, because we don’t know if we’re going to get to interview any of the other candidates, although we have invited them.

But in this episode I’m going to ask sort of the basic question: why did you want to run for mayor? Because it’s a sort of be careful what you wish for proposition here. You can run and raise issues and make sure these things get into the campaign. But you’re doing more than that. You seem to want to win this. But if you win this without some real support on city council, and, even more importantly, if you don’t have, like, a movement behind you that if you’re going to really take on issues like, you know, deep, chronic poverty and how to change that, you’re going to go up against some seriously entrenched interests in D.C. who–. And, I mean, the reason these things aren’t solved isn’t ’cause people don’t know what the policy is to solve it, really. You know, people are not interested. Their interests are in real estate speculation or kinds of other things, or, as we talked about in the last episode, people make a lot of money out of chronic poverty in various ways, from prisons to other things. So if you actually won, what could you do?

SHALLAL: Well, first of all, we live in a fairly progressive city. I mean, D.C. is–you know, relatively speaking, is pretty progressive. And there is a movement, there is a real progressive movement that’s waiting to be sparked.

And I think oftentimes people don’t go out and vote, they don’t get involved in the political process, because they feel like, eh, it’s really not my place to do that, it’s a black city, I’m not involved in some of the issues. Some of the white people that come and move to the city are progressive, they work for NGOs, they’re trying to change the world, but they don’t think they can do it through government, so they do it outside of government. I think they want to get involved but they don’t know how, they don’t know the path to get there. They’re looking for somebody that can actually lead that path and be able to show them a way that we can actually involve government in decision-making process.

Government is important. For someone that’s always been on the outside, I see how important government can be to make a change.

JAY: Same thing: cities are all about real estate. If you start dealing with chronic poverty, then you start dealing with real estate speculation. You–I don’t know if it’s too late in D.C., but the process of gentrification–and essentially what we’re seeing in Baltimore amounts to ethnic cleansing. You know, this makes a lot of money for some people. So you’ve got to take on the–it’s not about we’re just going to have good ideas and everyone’s going to say, rally round the mayor. It’s going to be a war.

SHALLAL: Well, I think it’s a process. And you can’t change it overnight, for sure, but you can certainly make some inroads. I think the city’s primed for change, it’s primed for accountability. The school system has created that kind of shakeup that needs to be paid attention to.

JAY: But would you not eliminate testing as a way to hold teachers accountable? ‘Cause that seems to be one [crosstalk]

SHALLAL: I think it’s one matrix, it’s one element of what teaching should look like. Testing should be there to guide, not to punish. So that’s how I see testing as a possibility.

So I think there is–you’re right. There is a lot of entrenched interests, no question. There’s a lot of people that have benefited from the status quo, no question.

But what we haven’t harnessed, I think, is people power. A lot of times, this is the sleeping giant in every community, really, is people oftentimes get turned off by the politics, and rather than getting out to–you know, with pitchforks to city hall, they kind of leave things alone and kind of stay aside. They want a reason to bring those pitchforks out and come out to city hall and make a difference.

I also believe that D.C. is fairly manageable. It’s 600,000 people. It’s a relatively small city. But it packs a big punch. It’s a city that is noticeable. It’s not like Vegas. What happens in Vegas stays in Vegas. What happens in D.C. has a ripple effect. It goes through the region, it affects the entire country, and sometimes the entire world. And we really have not focused on the power of D.C. as a hub, as an incubator for great ideas.

JAY: Now, I know you’ve been active in both last presidential elections. I know you’ve had criticisms of President Obama. But you’ve on the whole–especially during election times, you have defended him. When it comes to education policy, people that are critical of this high-speed testing and such have been very critical of President Obama. I mean, you look at the Chicago teachers and others in the more militant areas of teachers unions and such have been fighting for a different kind of education. You know, it’s–President Obama essentially carried on President Bush’s education policies, more or less.

JAY: And not only education policies, but with–.

SHALLAL: Unfortunately, I think there’s a lot of truth in that. And Arne Duncan has been to D.C. several times, and to the D.C. public schools, and talks about how our school system’s doing great. It’s really hard when he has such a big megaphone to be able to, you know, snuff that out and say, wait a minute, let’s look deeper, let’s look at other things Yes, in some areas, schools are doing better, but it’s really been a problem because we’re not focusing on the people that need it the most.

SHALLAL: I think, you know, what’s taught me in this process in running for office–and this is my first foray of running for office–is hope is eternal. People do not give up on hope. I think we as human beings are just wired that way. We always think that there’s a possibility of something better around the corner.

JAY: Okay. But you’re giving me a thesis on hope, and I asked you about President Obama.

SHALLAL: President Obama is a thesis on hope. But, yes, I think it’s important to have inspirational leaders.

What’s happened over the past few years in D.C.–D.C. is not that old. We got Home Rule in 1973. You know. What’s happened in that time is it’s become–rather than a city for the people, it’s really become a city for developers. And that’s been problematic, because developers don’t always have the interests of the people that they’re helping or they’re developing for.

JAY: Okay. When it comes to President Obama, you are–certainly have learned to be a politician. But–.

SHALLAL: You know, Obama’s way out there in the stratosphere. I’m not really as concerned about President Obama as I am–. You know, politics is local. You’ve got to get involved locally. So at the local level is where you can make a change. It’s very hard to expect change on the national level.

JAY: Yeah, I agree with that.

JAY: I agree with that.

Okay. We’re going to–when you’re either mayor or not, we’ll pick this up again.

JAY: Okay. Thanks for joining us.

SHALLAL: Thank you very much, Paul.

JAY: And thank you for joining us on Reality Asserts Itself on The Real News Network.

Andy Shallal is a 2014 candidate for mayor in D.C. He is the owner of the Busboys and Poets restaurant chain, a hub for progressive politics and culture in the nation’s capital. In 2003, he founded Iraqi Americans for Peaceful Alternatives in opposition to the invasion of Iraq and has been involved in the peace…