Dr. Alan Robock responds to EPA administrator Scott Pruitt's comments on carbon dioxide and explains CO2's role in the warming of the atmosphere

Dr. Alan Robock responds to EPA administrator Scott Pruitt's comments on carbon dioxide and explains CO2's role in the warming of the atmosphere 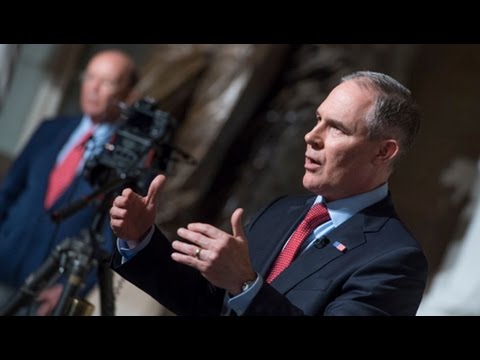 In a move that shocked, and angered many around the world, Trump’s EPA head Scott Pruitt, took aim at the scientific consensus over what’s causing climate change. Recently telling CNBC that carbon dioxide is not a main contributor. Here’s what he said.

SCOTT PRUITT: No, I… No, I think that measuring with precision, human activity on the climate is something very challenging to do, and there’s tremendous disagreement about the degree of impact. So, no, I would not agree that it’s a primary contributor to the global warming, that we see.

SCOTT PRUITT: But we don’t know that yet.

JAISAL NOOR: Now joining us to discuss this, is Dr. Alan Robock. He’s a Distinguished Professor of Climate Science, in the Department of Environmental Sciences at Rutgers University. Thanks so much for joining us.

JAISAL NOOR: So, we want to get into the science of this, but first, your response to Pruitt. He has deep ties to the fossil fuel industry, and he’s been a fierce opponent of environmental regulation, as the Oklahoma Attorney General.

ALAN ROBOCK: Well, he’s absolutely wrong. He’s not a scientist, like I am and like all my colleagues are. We’ve known that carbon dioxide traps energy, that it’s a greenhouse gas, for a hundred years. And we’ve been able to measure that precisely, and we’ve been able to measure its effect on climate change. And most of the warming of the last 50 years is caused by the additional carbon dioxide, and a few other greenhouse gases, that humans have put into the atmosphere. There’s no other way to explain the warming that we’ve seen.

JAISAL NOOR: We wanted to start with the basic chemistry. Talk about what carbon dioxide is, and what about the chemical structure of the molecule that makes it heat trapping, or in other words, a greenhouse gas?

ALAN ROBOCK: Carbon dioxide is a carbon atom, and two oxygen atoms, and they’re in a row. When heat energy hits them, they start vibrating, and they can vibrate like this, they can move around, and they wiggle up and down. This vibration that is induced by their absorbing the energy from the heat, makes them move around faster, and they bounce into all the other molecules in the atmosphere –- mainly nitrogen and oxygen –- and warm them up. Then they can emit heat energy by slowing down their vibrations, and some of that emission goes out to outer space, and some of it comes back down to Earth.

That additional emission from carbon dioxide is what traps the heat, is what increases the amount of energy at the surface.

When you warm the climate by trapping more heat with carbon dioxide, that puts more water in the atmosphere, and that makes it even warmer still. That’s called a positive feedback. The relative humidity stays the same, but the amount of water; the absolute humidity goes up, because the temperature is warmer.

This is very well understood, and it’s not controversial at all. There’s no question about that.

JAISAL NOOR: Can you talk about how it’s produced naturally, and why it’s a by-product of fossil fuel consumption?

ALAN ROBOCK: Well, fossil fuel is coal, and oil, and natural gas. And those are called hydrocarbons. They’re mainly made up of hydrogen and carbon. When you burn them, you mix oxygen with them, and that produces water –- H2O –- and carbon dioxide — CO2. These two gases are the result of combustions. Every time you drive your car, every time you turn on gas to cook your food, it puts CO2 and water vapor into the atmosphere.

JAISAL NOOR: What role does it play…? Sorry, go ahead.

ALAN ROBOCK: To further answer your question, you asked about the natural cycle. Of course, when it’s spring now in the northern hemisphere — and so all the flowers you’re seeing outside, all the leaves, all the food that’s about to be grown — is carbon. It’s being taken out of the atmosphere by photosynthesis, and that’s driving down the concentration of CO2.

In the fall, when these things decay, the CO2 goes up, so there’s a seasonal cycle. And the seasonal cycle of the carbon, puts about 100 petagrams of carbon into the atmosphere every year, and takes 100 out. Humans put about 9 in per year. So, we have 109 going in, but only about 104 comes out, so about 5 petagrams every year stays in the atmosphere. It’s not taken up by the ocean. It’s not taken up by more vegetation, and that’s what’s causing global warming.

JAISAL NOOR: Pruitt also talked about how CO2 levels are measured. Can you explain this to us as well?

ALAN ROBOCK: Well, we have chemical reactions. We suck the CO2 in, the air in, and we measure its concentration. And this is well-known chemistry. It’s been done for a long, long time, and as I said, it’s been done at Mauna Loa for more than 50 years. And so, it’s very precise, and there are three other baseline observatories that the U.S. government operates, one in Point Barrow, Alaska, one in Guam, and one at the South Pole. And they’ve been measuring it, and then we take flask samples and take them to laboratories and measure them.

This is all very well known. There’s no controversy about it at all.

JAISAL NOOR: And finally, you know, by challenging this, the consensus, Pruitt is able to justify removing some of the regulations that were enacted under the Obama administration. What impact could this have for the future of the planet?

ALAN ROBOCK: Now, there’s three fundamental questions about this. One is, how will the climate change, if we continue to put greenhouse gases in? The other is, how will it affect us? And the third is, what we should do about it.

As a scientist I can answer the first two. Clearly, putting more greenhouse gases in causes global warming. How it will affect us, there are winners and losers. There are people that are now doing shipping through the Arctic Ocean. They’re winners. There are people that continue to sell fossil fuels. They are continuing to make a profit. Most of the impacts, however, are negative, averaged over the planet. Sea level is rising and there’ll be stronger storms. There’ll be more floods and droughts, and there’ll be impacts on our food and water supply.

What we should do about it is a value judgment. As a scientist, I can’t tell you what to do about it. Everybody makes their own decision, based on their own values, based on their own investments, and so forth. And so, there are people that continue to make a lot of money with business as usual. Continuing to sell products that dump CO2 into the atmosphere, using it as a sewer, and not paying any sewer charges. And they make money from it. So, they want to continue doing that –- so the people that sell you coal, and oil, and natural gas.

JAISAL NOOR: All right. Dr. Alan Robock, thank you so much for joining us.

Dr. Alan Robock is a distinguished professor of meteorology in the Department of Environmental Sciences at Rutgers University. He’s an editor of Review of Geophysics, the most widely read journal in the field. He was also in the faculty at the University of Maryland, where he served as a professor and state climatologist of Maryland…