Are the Deaths of These Black Men in Police Custody Really Accidents?

A TRNN investigation looks at several cases of African-American men who died in police custody that were ruled accidents or due to natural causes, but outside experts argued were in fact the result of an aggressive police tactic

A TRNN investigation looks at several cases of African-American men who died in police custody that were ruled accidents or due to natural causes, but outside experts argued were in fact the result of an aggressive police tactic 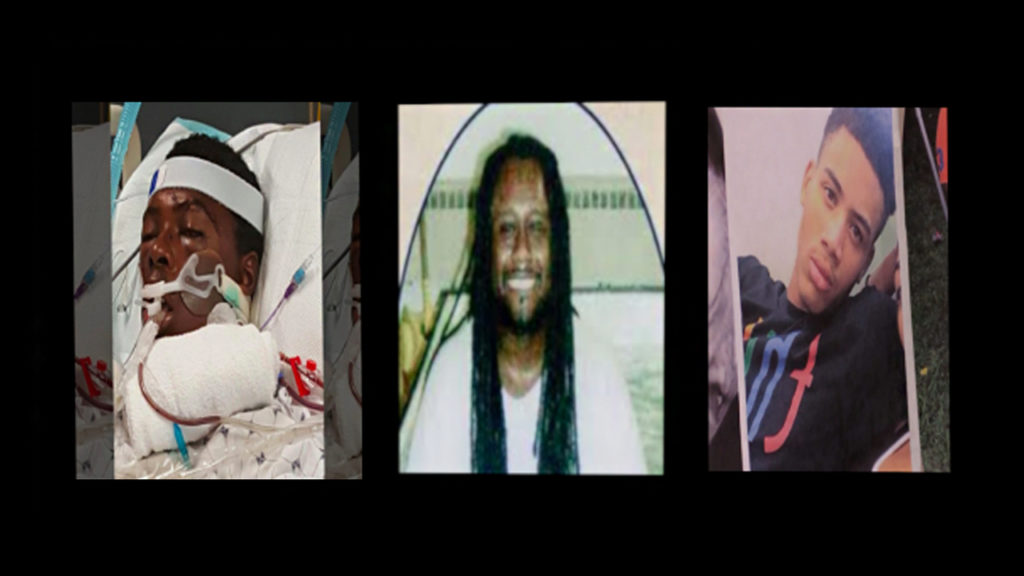 TAWANDA JONES: Did not take any autopsy pictures. How convenient. One would ask, why wouldn’t you take pictures of an autopsy?

TAYA GRAHAM: Her name is Tawanda Jones, and she has been battling Baltimore’s law enforcement-industrial complex for years. Her brother Tyrone West was killed during a stop by police in 2013. Since then she has protested every Wednesday to seek justice.

TAWANDA JONES: The Medical Examiner’s Office took a 154 days, right, literally, and they took that long. My family stood out protesting. That’s how Wednesdays were born, because of the lack of information, the lack of transparency. That’s how we started West Wednesday.

TAYA GRAHAM: The police who killed her brother were never charged. Jones and her family believe that a prolonged beatdown by officers was responsible for his death. But the Maryland state medical examiner ruled it the result of dehydration and an underlying heart condition, which is why Jones was holding yet another protest outside the Medical Examiner’s Office in West Baltimore to call attention to the process that she says is biased towards police.

TAWANDA JONES: Nobody holds them accountable. It is up to us as citizens to demand accountability, to demand that they be investigated.

TAYA GRAHAM: Because she consulted her own pathologist, and even exhumed his body, which led outside experts to conclude he died from something called positional asphyxiation. And while the city settled with Jones’s family for $1 million, she declined to participate so that she could continue to protest.

TAWANDA JONES: And my attorneys, they went and got their own doctor, their own forensic person, and his name was Dr. Manion. He concluded that my brother was murdered. Second person, reliable source, concluded-

TAYA GRAHAM: Was it positional asphyxiation?

TAYA GRAHAM: But West’s death is not the only case where the Medical Examiner’s Office has ruled a police death accidental despite evidence to the contrary. Tawon Boyd called Baltimore County Police in 2015. Officers said he was behaving erratically, so they took him to the ground with brute force. His lawyer, A. Dwight Pettit, a Real News board member, says Boyd’s injuries were extensive and unnecessary.

DWIGHT PETTIT: When the police came he walked outside. He was–they claimed that he got loud. There’s no evidence whatsoever of any aggression, any type of threat to the police officers. When they wanted him to put him–to handcuff him–he refused. They threw him down. And you see the pictures of his face. They beat him tremendously.

TAYA GRAHAM: And an autopsy found multiple instances of blunt force trauma. But again, the state medical examiner ruled the cause of his demise an accident. And again, an outside expert disagreed, ruling instead that the cause was positional asphyxiation.

TAYA GRAHAM: Positional asphyxiation, sometimes called traumatic asphyxation or riot crush, occurs when downward pressure is applied to a person on the ground–something that occurred in both Boyd and West’s case.

Which brings us to the case of Anton Black. Anton was chased, tasered, and forced to the ground by two officers and a civilian. The chase began, police say, after a white woman called 911 and said that Anton had kidnapped a 12-year-old boy. But this surveillance video obtained by The Real News shows Anton walking with the boy just before he was stopped by police–evidence his family says belies the allegations that prompted his stop.

After Anton was chased, one of the officers laid his body across him. Forensic expert Cyril Wecht says that this was a critical moment, and why his death should have been ruled positional asphyxiation.

CYRIL WECHT: How convenient that he should have died from that defect at the time that he is being restrained in a position that has been barred, banned, and prohibited from various national police agencies throughout the country and elsewhere in the world. This is a classical case of poitional asphyxiation in which somebody is placed face down, and then someone leans on his back, presses down on his back, and he’s tasered, after several minutes, and then he goes limp. That’s a classical case of positional asphyxiation.

TAYA GRAHAM: But again, the state medical examiner ruled his death an accident, and again used an underlying heart condition to justify the decision. Wecht called the ruling irresponsible.

CYRIL WECHT: I strongly disagree with the final diagnosis that the cause of death was a coronary artery anatomical aberration. That defect had been present in Mr. Black’s life his entire life and had not produced any problems, to my knowledge, from reading the report.

TAYA GRAHAM: We asked the state medical examiner’s office for comment, but they declined.

The Maryland State Medical Examiner’s Office differs from similar agencies in other states, where the chief is elected–a lack of scrutiny that Jones says prompts her to continue her protest outside the Medical Examiner’s Office, a presence she vows to continue on the behalf of the men who died, and to shine a light on a little-known agency that plays an outsized role in police accountability.

TAWANDA JONES: We should be the ones that select them in, and if they’re not doing something right, get them out.

A. Dwight Pettit has been practicing law since 1970, when he began his career as a trial attorney for the Small Business Administration under President Richard Nixon. During his time with the SBA, he litigated the landmark case Pettit v. United States, which established precedent for back pay awards in discrimination cases. Pettit left the SBA…