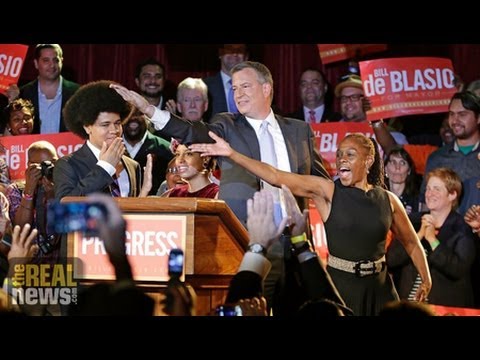 Tuesday is election day in many cities across the country. By the time you’re watching this story, Bill de Blasio will likely will have won New York City’s mayoral elections. Recent polls had him leading Republican opponent Joe Lhota by a wide margin. De Blasio, who replaced three-term Mayor Michael Bloomberg, ran a campaign focused on addressing income inequality, reining in developers, taxing the rich to fund pre-K, and limiting the privately run but publicly funded charter schools that proliferated under Bloomberg. While he’s been embraced by many for his stances, some have questioned whether de Blasio truly has progressive credentials.

Now joining us to discuss this is Ari Paul. He’s an independent journalist covering politics and labor. He’s written for The Guardian, Dissent, American Prospect, Boston Review, among many other outlets.

Thank you so much for joining us, Ari.

ALI PAUL, INDEPENDENT JOURNALIST: Thank you for having me.

NOOR: So, Ari, Bill de Blasio, who will likely be the next mayor of New York City, he’s–some have considered him the champion of Occupy Wall Street. Critics alike have called him the Occupy candidate for mayor of New York City. But critics also compare him to Obama, in the sense that people expect or hope that he has much more progressive stances than he’s even indicated. What’s your take on who’ps likely the next mayoral candidate, Bill de Blasio?

PAUL: Well, I think it’s beyond question that he is to the left of the previous mayor and the mayor before that, Rudy Giuliani. So by comparison, he comes in as a liberal. And I think a lot of people are right to see that.

But I think there is a tendency, especially among progressives, that when they get behind a candidate, they sort of see the election as an end into itself and so that after the candidate is elected, they sort of wash their hands of it and move on, when in fact if progressives choose to do that, Bill de Blasio will probably be greatly influenced by a lot of the campaign donors and backers that he had over this last year and even before that.

For example, he received a lot of backing from Bruce Ratner, who is best known in Brooklyn, where Bill de Blasio is from, for abusing eminent domain to take away private property from regular middle-income homeowners to build a new basketball stadium in Central Brooklyn that came with a bunch of promises for affordable housing that, you know, never came to fruition. He also backed other real estate deals in Brooklyn Heights that were opposed by his own constituents.

And even in this time where you see a lot of, as you mentioned, conservative critics sort of lambasting him for being a class warrior, he’s done a lot to sort of tell them he’s not actually going to be that much of a class warrior. In fact, he said to one of the big real estate groups, the Association for a Better New York, that he would run, that he would rule as a pro-business or a fiscal conservative. He even sat down with a bunch of CEOs from the financial corporations, including the head of Goldman Sachs, as reported by The New York Times, to say that Wall Street is our hometown industry and that he would work to support it, so that even though he would support some liberal reforms, he’s going to work in their favor as well.

NOOR: And what do we really know about Bill de Blasio? He is the public advocate. He served on the City Council. But talk about some of his background.

PAUL: Yeah. I mean, coming from the public advocate position, he has a lot–it comes with a great luxury. It’s a position where he’s able to get in the news a lot, make a lot of statements, but doesn’t have a lot of responsibility or power, so he doesn’t–he was able to kind of talk the talk but not really walk the walk.

By contrast, he ran during–as you might remember, during the Democratic primary he ran against another progressive, John Liu, who was comptroller, who had much more power as the city’s top fiduciary, which gained him a lot more criticism from the right and from the business community. As City Council person, Bill de Blasio didn’t champion a lot of progressive causes, but he was also very good about back channeling with the Bloomberg administration, striking deals with Bloomberg’s chief ally in the City Council, Christine Quinn. So he was very adept at playing both sides. He wasn’t as much the, you know, loyal oppositionist as people like John Liu were.

PAUL: Well, like in elections in most other parts of the country, it has a lot to do with money. And they give to all sorts of campaigns in a bundle money from other donors to candidates. So they are in a very good position to say to de Blasio down the road, we may to you and now we are calling in our favors. And I think that unless there is a sustained push from progressives, from labor unions, from community groups, teacher and student and schools activists, they’re really going to have his ear. It is true that real estate but also the financial sector, draw a lot of water in this town, and they can say, they can say to him, we could make life very difficult for you four years from now.

NOOR: And on the issue of crime, obviously, Mayor Bloomberg, he endorsed stop-and-frisk. He expanded it to hundreds of thousands of stops every year. What’s de Blasio’s take on it, especially in light of the fact that the ruling against stop-and-frisk was recently overturned by an appeals court just a few weeks ago?

PAUL: Yeah, this is actually a pretty difficult position for de Blasio, considering when he was running, he was always very careful with his words. He said that he wanted to reform stop-and-frisk. And that actually raised a lot of eyebrows from a lot of people who had been complaining about stop-and-frisk and other police excesses. As John Liu, who ran for mayor in the primary, the comptroller, is always very quick to differentiate himself from de Blasio by saying he wanted to abolish stop-and-frisk. So he always left himself a little bit of wiggle room with that.And when the lower court ruled stop-and-frisk unconstitutional, de Blasio was sort of able to–he said, look, it’s not up to me what whether or not stop-and-frisk is going to go on; I’m just going to defer to the court ruling. Now that it’s kind of up in the air, it really is up to him whether or not that’s going to go on. So people who really do care about stop-and-frisk and want to see it, you know, done away with are going to have to put pressure on de Blasio, starting on January 1 when he takes that oath of office, to keep to his word.

NOOR: Alright. Ari Paul, thank you so much for joining us.

NOOR: You can follow a set The Real News, and you can tweet me questions, story ideas, and comments at Jessel door. Thank you so much for joining us.

Ari Paul is an independent journalist covering politics and labor. He has written for the Guardian, Dissent, The American Prospect, Boston Review and many other outlets.