Annelise Orleck: Poor people are the real experts on poverty and any solution to address it should include their voices

Annelise Orleck: Poor people are the real experts on poverty and any solution to address it should include their voices 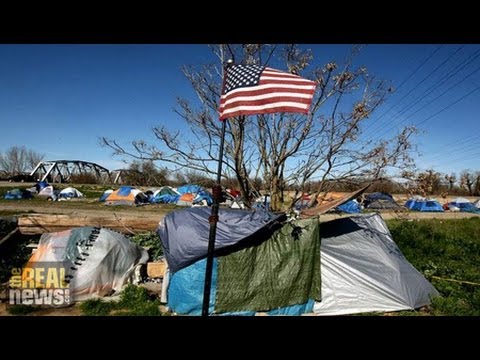 JAISAL NOOR, TRNN PRODUCER: Welcome to The Real News Network. I’m Jaisal Noor in Baltimore. And welcome back to our ongoing coverage of the 50th anniversary of the War on Poverty.

Launched by Lyndon B. Johnson 50 years ago today, the War on Poverty started programs like Medicare, Medicaid, Food Stamps to help alleviate poverty in this country, did not, of course, address the root causes of poverty.

Joining us again to talk about the 50th anniversary of the War on Poverty is Annelise Orleck, professor of history at Dartmouth College, author of Storming Caesar’s Palace: How Black Mothers Fought Their Own War on Poverty, coeditor of The War on Poverty: A New Grassroots History.

Thank you so much for joining us again.

ANNELISE ORLECK, PROF. HISTORY, DARTMOUTH COLLEGE: Thanks for having me.

NOOR: So talk about what your research has uncovered, what you’ve written about. What would a grassroots War on Poverty look like, a War on Poverty as envisioned by poor people in this country five decades ago?

So one group of remarkable women that I have gotten to know and written about is a group of migrants from Mississippi, Louisiana, and Texas who moved to Las Vegas in the 1950s. And applying for War on Poverty money, they opened their neighborhood’s first community health center, first library, renovated and opened the first public swimming pool, which sounds trivial, but not in a place where it gets to be 115 in the summer. And they began running community newspapers. They solarized buildings. They built low-cost housing.

And their motto was: we can do it and do it better, by which they meant that poor people are the real experts on poverty. And they had statistics to prove it. Their medical clinic, running a War on Poverty program called Early Periodic Screening and diagnostic testing, brought in, screened, and treated a higher percentage of eligible poor children than any federally funded pediatric clinic in the country.

So from the start I think a grassroots War on Poverty today should allow for people to be the real experts on poverty and to recognize that, you know, they balance the budgets in their households, they know what kinds of services their communities need, they know what kinds of jobs people would like to be trained for or are trained for in, you know, underemployed areas. So in all those ways I think that’s one way that a grassroots War on Poverty empowering poor people would make a difference today as the poverty rate continues to climb.

So that creates the final thing, which is that I think there needs to be job creation. And you mention that they didn’t recognize the root or attack the root causes of poverty. There were people in Johnson’s Labor Department who really wanted to do job creation, and Johnson was nervous about it. And I think job creation came more under Nixon and Carter, when particularly the CETA program, the Comprehensive Employment and Training Act, allowed community groups to hire people to do needed jobs in their own communities. And although that attack came in for a lot of–that program came in for a lot of attack and it was seen as corrupt and associated with welfare, it was an important program.

Another public jobs program that never really happened was proposed by Louisiana conservative Democrat Russell Long, who was the father of the earned income tax credit, which is now the most successful income transfer program in bringing people above poverty, second only to Social Security. He wanted a public jobs program with that. And that came–that desire came in part for–he wanted to help the working poor. He also had some interesting consultations with welfare mothers and battles with welfare mothers in the Senate. And he was always telling them to work, and they said, great, we want to work–create a jobs program. And so the original proposal for the earned income tax credit had a jobs program. And I think that’s one thing that we could do today that would be really successful and that I hope President Obama will consider in his last couple of years.

NOOR: And finally, compare the proposals from the War on Poverty with FDR’s New Deal.

ORLECK: Well, I think that FDR’s New Deal did have a more robust public jobs program through the Works Progress Administration, the Public Works Administration. We still admire a lot of the bridges and the post offices and the trails, you know, that were built in those years. And I think that something like that would be really useful.

FDR wasn’t really successful in passing health care. Medicare and Medicaid came as part of the Great Society and now, you know, an expansion beyond that through the Affordable Care Act.

I think also that the direct involvement of community organizations and people on the ground was much more of an innovation of the Johnson years. Johnson’s program included funding for secondary education for the middle class. A whole generation of middle-class kids, including myself, went to school on the Basic Educational Opportunity Grant.

So I think that there are many parts of the Great Society that, as Johnson hoped and dreamed, went beyond what Roosevelt created. Not all of them have lasted, but many of his programs have been as tenacious and almost as long-lasting as those of the New Deal.

NOOR: We’ll post both parts of our interview at TheRealNews.com, as well as our full coverage of the 50th anniversary of the War on Poverty. You can follow The Real News on Twitter @therealnews, Tweet me questions and comments @jaisalnoor.

Annelise Orleck is Professor of History at Dartmouth College. She is the author of Storming Caesars Palace: How Black Mothers Fought Their Own War on Poverty (Beacon: 2005)  and co-editor of The War on Poverty: A New Grassroots History (University of Georgia Press, 2011.) She is also the author of Common Sense and A Little…