50 Years Later, the War on Poverty Working Better Than the Right or Left Will Admit Pt. 1

Annelise Orleck: Though the War on Poverty failed to address the structural reasons poverty is so widespread in America, it did bring about badly needed changes including addressing childhood poverty,expanding the social safety net and empowering low income communities of color

Annelise Orleck: Though the War on Poverty failed to address the structural reasons poverty is so widespread in America, it did bring about badly needed changes including addressing childhood poverty,expanding the social safety net and empowering low income communities of color 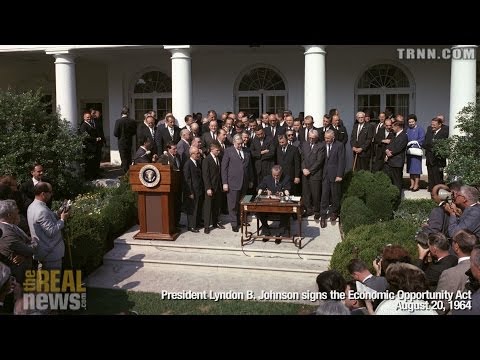 We’re continuing our coverage of the 50th anniversary of the launching of the War on Poverty by President Lyndon B. Johnson. The War on Poverty was comprised of a series of federal laws that provided food aid, health care, employment opportunities through the creations of programs like Medicare, Medicaid, food stamps, and the Economic Opportunity Act.

Now joining us to discuss this is Annelise Orleck. She’s a professor of history at Dartmouth College, author of Storming Caesar’s Palace: How Black Mothers Fought Their Own War on Poverty, and coeditor of The War on Poverty: A New Grassroots History.

ANNELISE ORLECK, PROF. HISTORY, DARTMOUTH COLLEGE: Thanks for having me.

NOOR: So, let’s start off by taking a look at how the War on Poverty is being remembered today. On one hand, you have Republicans taking to the airwaves, saying that the War on Poverty is a miserable failure because more people are in poverty today than were 50 years ago. On the other hand, Democrats from President Obama to Bill Clinton have distanced themselves from the policies launched 50 years ago. And they’ve also gone through efforts such as privatizing these same policies. What is your response?

It succeeded in cutting poverty. Did it eradicate it entirely? No, but that was perhaps a bit of bombast on Johnson’s part. It was not likely they were going to, quote-unquote, end poverty “in our time.” Nevertheless, in ten years they cut child poverty in half. And overall, the poverty rates in the country have not approached what they were prior to the enactment of the Economic Opportunity Act in 1964. So in terms of its impacts on poverty, it was significant.

But there’s a second way in which I think it was a great success, and that is that it expanded the political class. It allowed poor people into the political process and allowed them to serve on school boards, housing boards, to run for office and city council, state legislatures, and even, you know, to Congress and some higher-up federal jobs. So in all of those ways I think it was a success.

It also delivered really necessary and vital services to poor communities across the country, including medical care, housing, food aid, opened libraries, opened community centers, even (in the analysis of some health care scholars) extended the life span in certain poor communities.

So in all of those ways I am one of the rare people who says the War on Poverty was a pretty big success.

NOOR: And you mentioned–you touched upon this, and we’ve talked about it with Glen Ford in a previous interview, but the War on Poverty was also a result of the mobilization of poor people across this country. Can you talk about that? ‘Cause that is also another aspect of this that is absent from the mainstream discussion.

ORLECK: Yeah. The War on Poverty was in many ways an outgrowth of the civil rights movement. And when Lyndon Johnson introduced it, he said political rights are important, but, in his words, “freedom is not enough.” You can’t be a full participant in our society if you are hungry, if you’re sick, if you are ill-clothed. And so, in order to fulfill the promises of the Great Society and of the civil rights movement, he began to enact the legislation of the Great Society.

And there’s no question that one of the most controversial things about it is that in giving federal funds directly to community organizations, in many ways it continued the social unrest of the civil rights era, often moving it to northern cities. And that was something that made the War on Poverty enemies in the Democratic Party, especially among mayors and governors and city council leaders, as well as in the Republican Party.

All that said, despite the attacks by conservatives, despite Democrats distancing themselves from these programs, the reality is different from the rhetoric. The reality is that most of the War on Poverty programs are still on the books. They’ve been cut, they’ve been changed, but no one has been able to get away with them. And indeed some of the biggest expansions have come from Republican presidents, Ronald Reagan extending the earned income tax credit in the mid ’80s, George Bush expanding the Food Stamp Program in the 21st century.

NOOR: And what’s behind the attacks on these programs?

ORLECK: Well, I think that that’s complicated. To some extent it’s a backlash against the civil rights movement. It’s coded racial attacks. It’s built on this notion that black people are asking for things that they don’t deserve. A perfect example of that relatively recently was after Hurricane Katrina, George Will published a column called “River of Liberal Banalities Overflowing”, in which he suggested that the big problem in New Orleans was not that the federal government didn’t care enough about the poor, as then senator Barack Obama had suggested, but that black girls needed to stay in school and stop having babies before they were married. So I think there’s a racial undertone. There’s no question to that.

I think also attacking the War on Poverty has been an important part of the conservative resurgence. It’s tapped into all kinds of fears and resentments, ideas that, you know, somebody’s getting something for nothing, and it has attracted votes in that way. And I think we also see very early on in 1964 Ronald Reagan already making some of the arguments you see now from the Tea Party about how the War on Poverty was expanding government in ways that, you know, limited people’s freedom.

So the themes in this attack have been there all along, and I think they’ve been central to the resurgence of conservative politics on the national level.

NOOR: And so Republicans note that there’s more people in poverty today than there were 50 years ago. What’s your response to that statement specifically?

Now, there’s no question that it’s up higher now than it has been in a very long time, and part of that, a big part of that is the aftermath of the 2008 recession, the jobless recovery. All of that matters. And the increasingly skewed distribution of wealth, changes in the tax code, cuts to tax rates at the very top of the scale, all of those things have contributed to poverty today.

But it is simply not true that–I mean, it’s a sleight of hand. Yes, there are more people who are poor, but the percentages are still lower than they were before the Economic Opportunity Act.

NOOR: Okay. Well, that wraps up part one of our discussion. We’re going to continue this in part two and talk about what some solutions would look like today, and we’ll take a look at what poor people were proposing 50 years ago in their own war on poverty.

Annelise Orleck is Professor of History at Dartmouth College. She is the author of Storming Caesars Palace: How Black Mothers Fought Their Own War on Poverty (Beacon: 2005)  and co-editor of The War on Poverty: A New Grassroots History (University of Georgia Press, 2011.) She is also the author of Common Sense and A Little…